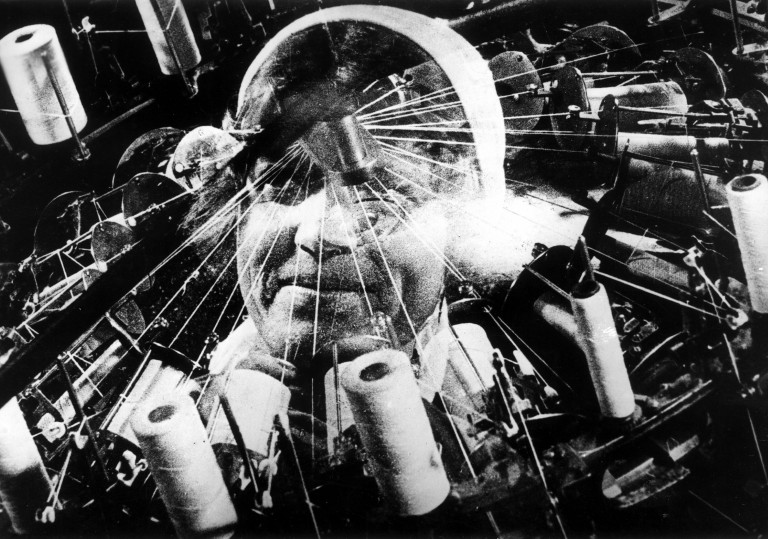 The People of Odessa

Critics recently voted this the greatest documentary of all-time. No pressure then.

Fascinating enough as a social document, but genuinely thrilling in how its multifarious technical trickery whips up an ecstatically cinematic delirium.

Wow! Now you can see what the fuss was all about – and it feels good.

Check out that bra clasp! As a young woman prepares herself for the day, she hooks together the most decoratively embroidered fasteners, bringing that extra bit of beauty to everyday functionality. Even in 1929, Russian avant-gardist Denis Arkadievitch Kaufman knew that when you pointed a camera at something, people regarded the subject with heightened interest and concentration.

So his hand-cranked equipment goes everywhere – on top of buildings, attached to trams and motorbikes, in the factories and pubs, on the beach – asking us to look afresh at every human face, moving piston, and thronging street scene. The day-in-the-life ‘city-symphony’ was already a familiar sub-genre by the end of the ’20s, but what was fresh then and holds up even now is the film’s insistence on not only knowing that you’re looking, but investigating what it means when the machinery of cinema changes our relationship with the world.

Of course, now we’re enveloped by moving images from myriad devices, we hardly give such questions a second thought. It’s easy to treat a Soviet-era silent classic like this as some sort of set-text duty, not something you’d watch for your own pleasure. Yet the keynote here is just how invigorating it is to return to the first principles of visual language in this foundation stone for modern cinema. No coincidence that the oldest of three Kaufman brothers took the name Dziga Vertov – meaning ‘spinning top’ – and buoyed by the experimentalism of the Revolutionary late-’20s (Rodchenko’s dynamically modernist photography and graphics work offer a key reference point), he was determined to be more than an observer, delivering a cinema whose kinetic construction was energetically self-evident.

Vertov shows us everything you can do with a camera, creating double and triple exposures, split screen, freeze frames and slow motion. Yet he’s interested in more than formal possibilities, suggesting cinema’s capacity for social commentary (cutting from abject beggars to the frolicking bourgeoisie), education (see how these machines work) and indeed voyeurism (from boudoir jollies to seaside body count).

Above all, he’s super-excited by the power of editing, out doing Sergei Eisenstein for punch and drive in motoric rhythms which almost seem to prefigure modern house music in their driving build-up through trancey repetition towards ecstatic quadruple-time release. A release in which everyone has their part to play, as laid out in the climactic sequence incorporating an audience watching this very film in a cinema, the editor piecing the sequence together and the eye of the camera lens which shot the footage. Not only does this rapid-fire montage suggest – for 1929 at least – the viewers’ newly developing sensory consciousness, but it’s also a tremendously upbeat vision of cinema as a shared enterprise, a democratic medium where we’re all in it together.

Too naive, in retrospect? Maybe, but as you enjoy this newly minted digital restoration, replete with Alloy Orchestra’s appropriately head-banging, metal-bashing score, it’s still enriching to be treated as an equal, rather than just another consumer opening wide for another spoonful of product.

Critics recently voted this the greatest documentary of all-time. No pressure then.

Fascinating enough as a social document, but genuinely thrilling in how its multifarious technical trickery whips up an ecstatically cinematic delirium.

Wow! Now you can see what the fuss was all about – and it feels good.