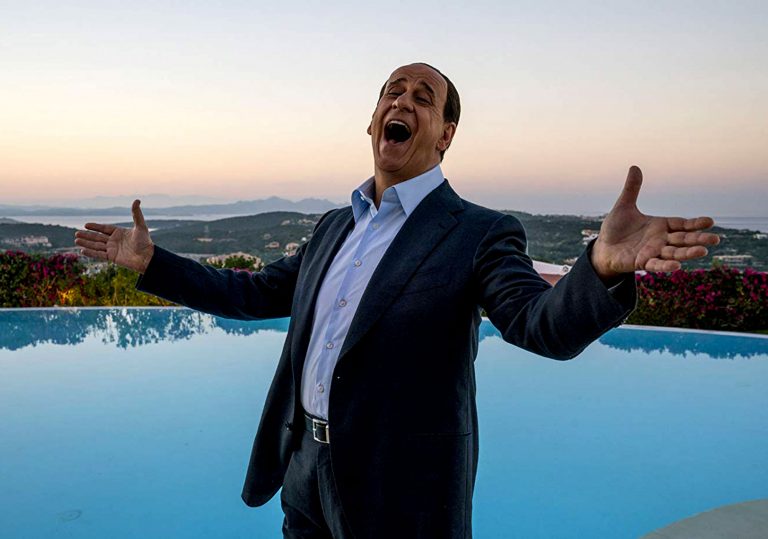 Paolo Sorrentino takes a break from The Young Pope for a big screen return.

The seams from this being two films combined into one are very visible.

Toni Servillo is compelling as ever, but there’s not enough bite here.

A partially fictionalised portrait of Silvio Berlusconi in the years leading into his final stint as Italy’s Prime Minister, Paolo Sorrentino’s latest project was released in his home country as two separate features, with a truncated mash-up version making its way to the UK.

About an hour of material is lost in this combined cut, and while this review comes from a place of having only experienced the shorter edit, it is very evident after a certain point that many storylines and arcs established early in Loro will receive next to no pay off.

Saying that, since this version still clocks in at nearly two and a half hours, it feels safe to say that the weak bite in its, at times, strangely sentimental and soft-edged treatment of the notorious Berlusconi, probably wouldn’t gain sharper teeth with that extra hour.

Sorrentino’s reliable regular leading man Toni Servillo plays Berlusconi with a perma-mask of shit-eating grin, bringing to mind stand-up Dylan Moran’s great description of the figure as, “so thoroughly corrupt, every time he smiles an angel gets gonorrhoea.” The director initially treats him as a Gatsby-like figure as we follow swindling businessman, Sergio (Riccardo Scamarcio), for nearly an hour as he manoeuvres into a sphere of political influence with the allure of sex, drugs and glamour to schmooze his way inside.

Just as Sergio gets Berlusconi’s attention, Sorrentino loses his own towards the former, virtually leaving him and a few compelling supporting players behind to focus solely on the billionaire media magnate’s schemes to regain power.

The film’s eventual transition into chastising the hedonism in which its has been revelling is just as awkward as the slack narrative. As a vision of the fall of a contemporary Roman Empire, Loro’s bombast becomes numbing far too early.

Paolo Sorrentino takes a break from The Young Pope for a big screen return.

The seams from this being two films combined into one are very visible.

Toni Servillo is compelling as ever, but there’s not enough bite here.