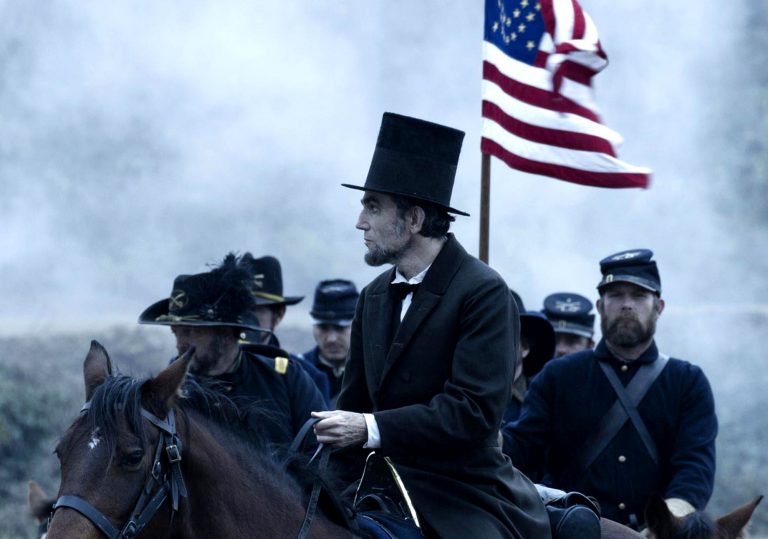 A rousing, rigorous and morally complex legal procedural more than a trad biopic. And all the better for it.

The niggles keep accumulating after the curtains are drawn.

Steven Spielberg’s solemn latest is less a biopic and more a complex drama on the subject of political ends versus means.

Steven Spielberg’s most vital films (often his most commercially successful) smuggle thorny elements into seemingly innocuous shells: ET and Close Encounters Of The Third Kind anatomise the instability of the nuclear family so harshly it hurts. Like Capra, redemption only comes when the pain is unbearable.

His most effective recent films – AI, Minority Report and War Of The Worlds – cut deeply when it’s time to depict strong negative emotions (panic, fear, abandonment, inexplicable destruction), then collapse in the face of a happy ending. AI’s daringly straightfaced ‘happy ending’, a nihilistic gutpunch, marks the one instance that a Spielberg finale, complete with soaring John Williams score, can’t be taken at face value. In short: Spielberg is a staggeringly gifted technician who falters when it’s time to be earnest.

More than a decade in development, Spielberg’s Lincoln is complex and sensitive on the subject of political ends versus means, in specific relation to the passage of the 13th Amendment outlawing slavery in the United States. His star is Daniel Day-Lewis, whose Abraham Lincoln is one of the arch method man’s most uncommanding archetypes. He tells rambling historical anecdotes to slow the pulse of a room to a tempo he can control.

In Lincoln, he’s unflinching in depicting the moral compromises that make change possible. The moral shortcuts necessitated by the executive and legislative branches of the US Government are – via Tony Kushner’s screenplay – presented unblinkingly. Of several monologues, the most spellbinding is the one in which Lincoln articulates the legal grey areas he exploited to preserve the Union, applying a lawyer’s mind to a moral task that can’t be legally accomplished.

This Lincoln is willing to organise the dubious vote-by-vote persuasion of opposing Democrats necessary to ratify the 13th Amendment, promising them post-legislative jobs if necessary. As severe abolitionist Thaddeus Stevens, Tommy Lee Jones is the scourge of pragmatism. Just as Day-Lewis predictably and flawlessly disappears into his part, Jones assimilates his: his panoply of barking outrage and baleful glares has rarely been better served.

In a key moment, Stevens is persuaded to quell his righteous acrimony to the expedient end of passing the 13th Amendment by denying that he seeks full equality for black Americans, only legal equality. It’s a riveting capitulation, rendered tone-deaf when Stevens strides off the floor of the House of Representatives with John Williams’ score – more rarely heard than usual but still always unwelcome – cheering him with a warm dose of woodwind sentiment, transforming a moment of necessary ethical compromise into unambiguous applause.

Such audio sentimentality is often, thankfully, avoided in one of Spielberg’s most stylistically tamped-down films. Auteur self-assertion primarily comes in the heavy shades of gauzy gold, bleak grey and stark white that make up the palette. Absent fathers, a permanent motif in Spielberg’s work, have died down a bit in recent years, though it’s probably worth noting that Lincoln’s assassination is depicted through his youngest son’s eyes – the loss of the father of the nation is depicted foremost as a filial one.

Infelicities include – predictably, given Amistad – a patronising take on race, with Lincoln’s grateful manservant watching with a prescient lump in his throat as the president leaves for his fatal date at Ford’s Theatre. Sally Field’s turn as Mary Todd Lincoln is highly regrettable; viewers with no idea of her documented history of depressive behaviour (sometimes retroactively interpreted as bipolar disorder) will simply take her shrilling as fulfilling the usual obligation of cinematic wives towards husbands on bigger-than-themselves missions.

Viewer patience may erode entirely when she protests Abraham’s decision to let son Robert (Joseph Gordon-Levitt) enlist in the Union Army, risking his entrance into combat before the Amendment’s passage can ensure the fighting’s end. “Since you are sending our son to war, woe to you if you fail to pass the Amendment,” she hisses. If Spielberg’s goal is to show the pressures – reasonable and unreasonable – that Lincoln balanced, his execution falters.

It’s eminently watchable, but Lincoln’s larger purpose and relevance for Now remains elusive. Released against the backdrop of a contentious election in which the former party of Lincoln (the Republicans) relied heavily on racist dog-whistle cues to rally the faithful, dialogue about white people having lost their moral compass suggests one reason.

Another odd cue comes towards the end, when Lincoln muses about his post-political-life wish to visit Jerusalem, a historically documented urge that’s nonetheless an odd choice to foreground. Kushner and Spielberg’s sole previous collaboration was on Munich, which expressed both of their publicly noted ambivalence about Israel’s punitive measures regarding the Palestinians.

Even more suggestively, Lincoln ends with the president’s second inaugural address – specifically, its last line, calling for “a lasting peace, among ourselves, and all nations.” Labelling this a plea for a two-state solution is a definite stretch, but a call for international pragmatic negotiation might be this Lincoln’s strongest reason to exist.

A rousing, rigorous and morally complex legal procedural more than a trad biopic. And all the better for it.

The niggles keep accumulating after the curtains are drawn.