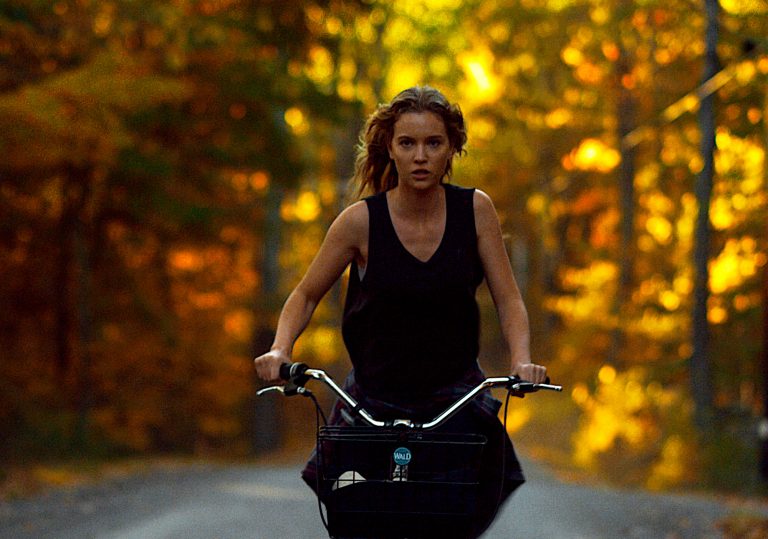 A bit on the nose.

But the right kind of uncomfortable.

You can guess from both the title’s hashtag, and from its verbal association with internet approval, that there will be an online dimension to Sarah Pirozek’s debut feature #Like, but it opens, and mostly stays, in the real world. The setting is Woodstock, New York State. We first see Rosie (Sarah Rich) engaged in that all-American activity of female teen display, cheerleading. She is a smiling, seemingly happy adolescent who moves and gyrates and dances in the company of other women.

Then, she wanders off from the group, her separateness from them clearly captured in wide shot as the title appears on screen. Rosie joins her mother Melissa (Marin Gazzaniga), who is waiting for her in the car and obviously, audibly weeping. Both mother and daughter are caught in their loss and struggling to move on from the death, exactly one year earlier, of Rosie’s younger sister Amelia (Samantha Nicole Dunn).

Breaking into Amelia’s old social media accounts, Rosie discovers the man who cyber-stalked her, setting off a chain of events that led to her death. When the local police show no interest in the dossier that Rosie has compiled, she decides to lay a honey trap, and to force her sister’s tormentor into a confession. With help from Rory (Dakota Lustick), Rosie lures @AndrewTamesUnicorns into an online chat and, despite the great care he takes in concealing his identity, pieces together what little evidence he presents to find, through detective work and dumb luck, his offline equivalent (Marc Menchaca): an unmarried building contractor who lives alone and hangs out with his camera in children’s playgrounds. Easily baiting him into a trap while her mother is away on a work trip, Rosie chains him up in the bomb shelter behind the house, and as she vents her anger, grief and guilt, they exchange stories.

Seen in the online video logs that she posted, Amelia is like Kayla Day, the sweet, gawky and anxious heroine of Bo Burnham’s Eighth Grade, just looking for attention and friendship and acceptance – except that the fact of Amelia’s death makes it clear that things have gone very wrong for her, in ways that, ever so slowly, the film will reveal. Rosie’s own endeavours – a complicated (not-quite) rape-revenge by proxy – draw on David Slade’s Hard Candy and to an extent Robert Lieberman’s The Tortured, as the film challenges the viewer to question whether, for all her target’s status as a paedophile and cyberbully, Rosie is doing the right thing, or even whether Rosie has the right man. In this way, #Like constantly interrogates the values of its own vigilantism, while testing our moral allegiances.

Pirozek never forgets that her protagonist is a teenager. She is a virgin, and she conducts her investigative work, even tails her prey’s pickup, all on a pushbike – and there is something naive about the vagueness of her aims and her approach to vengeance. It is as though, for all the calculation in her plan, she has, like any teenager, failed to think through the consequences of her actions – or indeed the psychology of entrapment – so that increasingly she too becomes a prisoner of her own scheme.

#Like is at times on the nose. In one scene, Rosie reads out college rape statistics to her drunken friends, and watches online video footage of alt-right meninists. “How do you rape a dude?” asks Stacy (Jolene Marquez) after hearing that male victims are even less likely to come forward and report the crime. Yet if this all feels a bit like a Public Service Announcement, it is also foreshadowing, with rape – both male and female – very much on the agenda.

There is, in fact, no suggestion that Amelia was ever herself raped – although she was manipulated, abused and objectified – but it is nonetheless made clear that both she and Rosie, surrounded by leering men constantly trying to take sexual advantage, have had to navigate an American rape culture. Significantly, a conspicuous US flag hangs over the scene of her attempt, however misguided, to redress the imbalance.

Similarly, perhaps it is a bit too obvious to have the lyric “Do I make you feel uncomfortable?” sung (by the band Juxt) over a scene of gender-inverted degradation (and again over the closing credits). But discomfort and confrontation, as well as some difficult dialectic, are definitely Pirozek’s aims here. “Maybe you didn’t do it, and maybe you did,” Rosie tells her captive. “In a way it kind of feels like we all did.” That is the takeaway message here, as #Like turns the tables on a systemic societal problem with many causes, and many victims.

A bit on the nose.

But the right kind of uncomfortable.