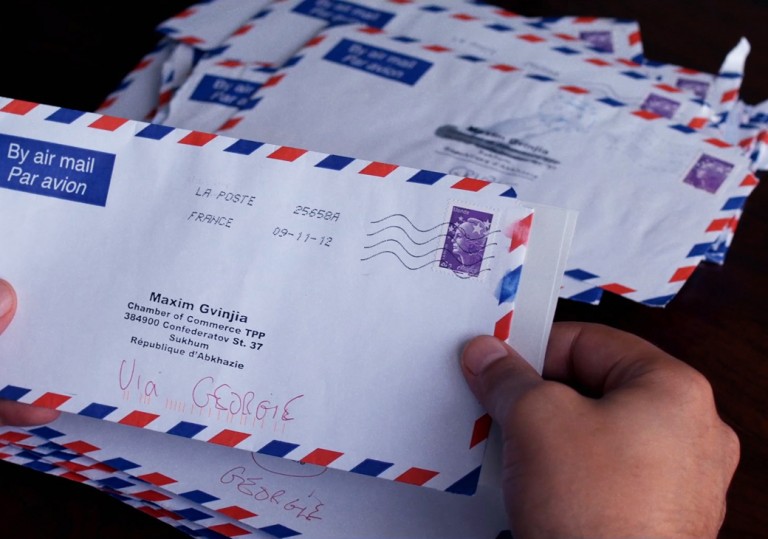 It’s always interesting to peak into a still illusive corner of Europe.

Haunting visuals accompanied by a philosophical voiceover, creating a vivid image of a former Soviet state and its inhabitants.

A poignant emotional journey which lingers in the subconscious for longer than expected.

Eric Baudelaire travels to the disputed territory of Abkhazia in this haunting documentary.

Set against the disassociated voice of Maxim Gvinjia – the eponymous Max – this portrait of the territory which was once attached to Georgia is the latest film by director Eric Baudelaire. Abkhazia is recognised by only a handful of countries following a protracted war with their former rulers, and Letters to Max documents its struggle to become a nation state.

Max is the former Foreign Minister of Abkhazia, and as such has a unique insight into its short history. The pleasingly philosophical politician’s voice dominates the soundtrack as he responds to the short, unequivocal letters sent to him from Paris by Baudelaire. The endearing relationship begins with Baudelaire sending (what he believes to be) an impossible letter to a country which, in the eyes of France, doesn’t exist.

Max is surprisingly candid in his responses, creating an easy atmosphere that contrasts with the sometimes bleak imagery accompanying his narration. He happily records his own failings and triumphs for posterity, and through their correspondence, a clear picture of a country in flux arises. (Recognised by their immediate neighbours but otherwise locked out of Europe, relying on Russia alone for trade and tourism, Abkhazia is striving for more universal acknowledgment.)

Baudelaire’s letters appear, unspoken, as text on the screen while the unobtrusive filming style captures images of everyday life: people dancing; schoolbooks tied up in corridors; once opulent houses now returned to nature; the devastation of war still very much apparent. The judicious use of silence is overwhelming, forcing focus onto the images of a nation nostalgic for the rule of the Soviet Union. Max appears in the visual aspect of the film but remains silent, or without subtitles, as with most of the other native Abkhazians. The focus is entirely on Max’s authoritative voice, expressing opinions and experience of the new state, government and war.

This leads to a single-minded narrative in which Abkhazia’s triumph and freedom from oppression is championed. It is only in the closing stages of the film that the issue of displaced Georgians is brought to the fore; while Max expresses limited sympathy, the refugees’ voices remain unheard. While not without its rough edges, Letters to Max is a beautiful and enlightening portrait of an all but forgotten corner of Eastern Europe.

It’s always interesting to peak into a still illusive corner of Europe.

Haunting visuals accompanied by a philosophical voiceover, creating a vivid image of a former Soviet state and its inhabitants.

A poignant emotional journey which lingers in the subconscious for longer than expected.