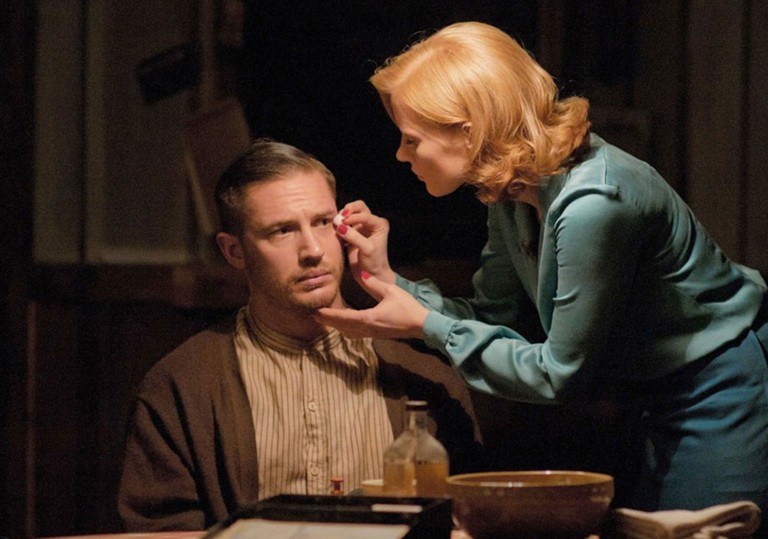 A stunning cast, a compelling story and an uncompromising director. Set hopes to ‘high’.

Some classic Hillcoat touches are offset by the film’s lack of visual punch.

Too much of the energy dissipates on screen, but this is striking and purposeful filmmaking.

You don’t say ‘no’ to Cannes. Which is how John Hillcoat’s moonshine drama found itself in the wrong place at the wrong time, earning an undeserved reputation as one of the festival’s disappointments. Because Lawless is singularly unsuited to the jaundiced expectations of the Croisette: too pulpy, too poppy, too violently unrestrained. It’s an impulsive, imperfect depiction of family, masculinity and authority – freewheeling but episodic, punchy but never quite persuasive.

Based on Matt Bondurant’s compulsively readable bio-saga, ‘The Wettest County in the World’, Lawless pitches us into the creek- streaked woodlands of Prohibition-era Franklin County, Virginia. It’s here that the Bondurant brothers, Forrest (Tom Hardy), Jack (Shia LaBeouf) and Howard (Jason Clarke), are making a name for themselves as roughhouse royalty in this moonshine kingdom; where every out-house and hollow hides a copper-bottomed whisky still. Liquor flows out of these mountains like rainwater, like the run-off from a storm of corruption, money and blood.

The Bondurants are as deep-rooted in this county as the pines that lichen the landscape. Howard, the eldest, is a Great War veteran and ragged, raging drunk; Jack is the young runt desperate to make something of himself; but it’s Forrest who watches over them, mute and massive and redolent of violence. Tom Hardy is cast close to perfection but almost to a fault.

His Forrest is a creation of implacable will and simple truths. “I’m a Bondurant,” he intones, “and we don’t lay down for nobody.” He appears cut from the earth itself, like some backwoods elemental, a character more imagined than performed.

Still carrying his Warrior tonnage, Hardy imbues Forrest with brute animal presence. But he’s too brooding, too off limits – to himself, to his family, to the audience – to invest him with real vitality. As Lawless unfolds, the guttural grunts that make up the bulk of Forrest’s dialogue become less taciturn, more unintentionally comic.

So it’s left to others to take centre stage, and it’s here that Lawless comes into its own as an ensemble drama. There’s Gary Oldman who deserves more screen time than he gets as Floyd Banner, the flamboyant gangster who gives Jack a break in the bootlegging business. There’s Jessica Chastain as Maggie, the Windy City stripper searching for something in Franklin County that she finds in Forrest. There’s Chronicle’s Dane DeHaan, whose studied naivety as damaged still hand Cricket Pate recalls Leonardo DiCaprio’s breakthrough role in What’s Eating Gilbert Grape?

And then there’s Special Agent Charlie Rakes, brought menacingly, mincingly to life by Hillcoat regular Guy Pearce. Rakes, gun hand of the state’s venal authorities, brings a new vision of progress to the “fucking hicks” in Virginia: a confederation of moonshiners, a grand racket with the politicians at the centre, sucking up the dirty money billowing out of the mountains.

Nowhere more so than his first encounter with Jack, where the pieces of Lawless fall into place and you’re reminded that few directors can conduct the casual conversation of violence with the clarity and eloquence of Hillcoat. It may also be the point where Shia LaBeouf graduates into something more than Steven Spielberg’s spoon-fed protégé. Jack has all the crackerjack energy of a proto-Clyde Barrow, but LaBeouf plays him, too, as an exercise in humiliation – bloodied, tear- streaked, frightened. It’s the performance of an actor, rather than just a star.

And yet for all that, there’s something missing in the dynamic between the Bondurants. Only Jack has experienced any sort of arc by the time they reach a chaotic and unheroic showdown with Rakes, so you’re left feeling something closer to curiosity than sympathy at their fate, never quite touched by its dramatic impetus.

But the real problem isn’t about character at all. This is the first time Hillcoat has shot on digital, and the result is close to disastrous. Despite being filmed on location in the forests of Georgia, Lawless lacks any kind of visual texture. The image is flat and over-lit, and though at first that offers a notable contrast to the events on screen – normalising and even domesticating these extremes of action and temperament – the lack of depth in the frame ultimately becomes overwhelming.

Lawless isn’t ugly, but it doesn’t have the visual identity of, say, The Road, in which Javier Aguirresarobe painted in shades of light and dark. Here, DP Benoît Delhomme appears powerless to conjure with the elements in front of him, and the film is consequently leached of life.

And so for all the grit and sweat and gun smoke up there on screen, it remains intangible – at arm’s length. You can see it, but you can’t touch or taste it. You can’t lose yourself in it as you could disappear into the shimmering haze of The Proposition. Lawless is a film of abundant potentiality, then – strange and edgy and flawed. It was never going to work in Cannes. But it doesn’t quite work here, either.

A stunning cast, a compelling story and an uncompromising director. Set hopes to ‘high’.

Some classic Hillcoat touches are offset by the film’s lack of visual punch.

Too much of the energy dissipates on screen, but this is striking and purposeful filmmaking.