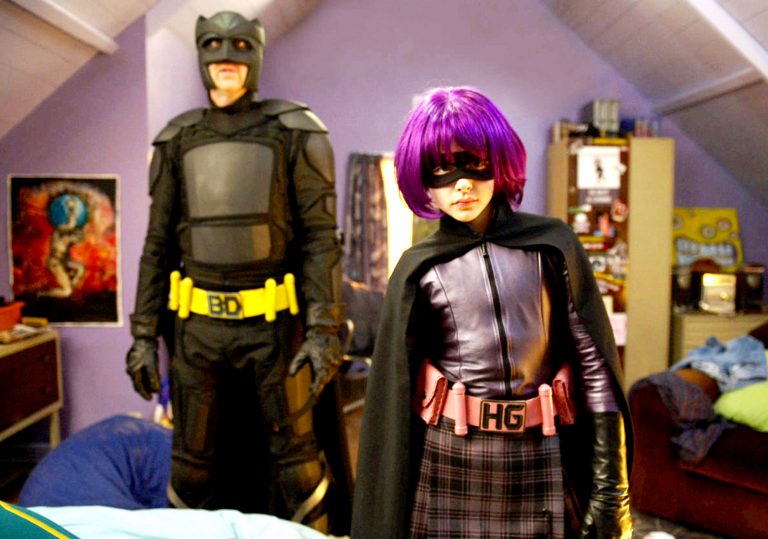 Emerged from relative obscurity with a sneak peak that sent the crowds crazy at Comic-Con in 2009.

With Edgar Wright’s Scott Pilgrim on the way later this year, Kick-Ass may be a harbinger of things to come.

It wasn’t a dying planet that created the superhero. It was rage and frustration, displacement and anxiety, inadequacy and fear. The comic-book was a fortress of solitude, but Ellis Island – not Krypton – was its spiritual home; the gateway to America for a generation of immigrants whose sons would reinvent themselves in the rippling red capes of extraordinary men.

But panel by panel, hero by hero, movie by movie, the fantasy of power has become a reality for the comic-book industry. In the last decade, as its mutation has been fuelled by the super serum of box office dollars, those artists and writers who imagined the world of tomorrow have been replaced by studio executives fixated on today.

They have given us the Golden Age of comic-book adaptations, but the factory franchises of Marvel and DC are no longer the creative engines of the comic-book community. Independent comics have emerged, providing a platform for characters and ideas unmoored from the mainstream.

Slowly, both the publishers and the film studios have come to realise that there is an appetite for comic-book cinema beyond the costumed crusader. But the superhero remains the preserve of the big budget blockbuster. Like the characters themselves, the independent superhero movie remained a figment of the imagination – an impossibility. Until now.

Because writer Mark Millar and director Matthew Vaughn have combined to create a film that breaks the rules. A superhero movie conceived outside the studio system for just $30 million. A comic-book adaptation that’s both deadly serious and light of touch. An inventive, destructive, serenely psychotic movie that gets being very, very wrong so very, very right. And it, too, has a secret identity: hidden within the blood, the violence, the bullet smoke and broken bones is the most riotously enjoyable superhero movie you’ll ever see.

Kick-Ass is rebuke, riposte, satire and love-letter rolled into one. With its bubblegum colours, its knowing wit and pulsing soundtrack, this is Millar’s answer to the ponderous mythology of the modern superhero.

Kick-Ass may self-consciously evoke classic comic-book archetypes, but in cranking up the sex and violence, and toning down the self-importance, Millar has avoided the vogue for ‘maturity’ embodied by Watchmen and The Dark Knight, and recreated the spirit of pure teenage delight that comics at their best indulge.

Dave Lizewski (Aaron Johnson) is an ordinary kid at an American high-school whose only super power is being invisible to long-time crush Katie Deauxma (Lyndsy Fonseca). Along with best friends Todd (Evan Peters) and Marty (Clark Duke), Dave’s life revolves around comics and videogames. But Dave has grand ambitions – when he’s not vigorously jerking off to his well-endowed English teacher, Mrs Zane, he’s dreaming of becoming a superhero. All it takes, he says, is the perfect mixture of naivety and optimism. One bright green wetsuit with gold trim later, a legend is born.

With the advice of his unsuspecting friends ringing in his ears (“Dude, if anybody did it in real life, they’d get their ass kicked!”), Kick-Ass hits the streets. But after a back alley showdown with a pair of thugs, it quickly becomes clear to both Lizewski and the audience that we’re not in Smallville anymore.

Nor is Kick-Ass the only masked avenger in town. Costumed maniac Big Daddy (Nicolas Cage) and his daughter Hit Girl are jacking the shipments of drug kingpin Frank D’Amico (Mark Strong). As the heroes’ paths cross in an increasingly crowded New York City, D’Amico and his troubled son Chris (Christopher Mintz-Plasse) prepare to send their own message to the costumed community.

Beginning with a trumpet riff that evokes John Williams’ legendary Superman theme, only to segue into the horrible crash landing of an Armenian schizophrenic, the film’s pre-credits sequence perfectly captures a tone of arch black humour that treads a fine line between the old and the new, the expected and the unpredictable.

Kick-Ass is indebted to the comic-book clichés that allow Vaughn to sketch out his characters in cinematic short hand. His allusions to classic superheroes (Superman; Peter Parker; Big Daddy’s ersatz Batman costume; Lizewski’s own reaction to an X-ray of his re-engineered body – “Dude, I look like frikkin’ Wolverine!”) tell us everything we need to know about our protagonists’ self-perception. They’re also a mark of the film’s confidence: Vaughn has seen the same superhero movies as us; he shares our expectations, and he knows how to confound them.

But for all that the film may be built on comic-book conventions, there has never been an adaptation that feels quite like it. Kick-Ass certainly isn’t the first post-modern superhero, but as a product of MySpace and YouTube rather than The Daily Planet or Bugle, he is an original web slinger. Just like the comic itself, which Millar launched with a series of fake social networking pages and internet videos, Kick-Ass is an online phenomenon, a viral avenger, a hero for the reality TV age.

The real and the unreal are here integrated as never before, resulting in a superhero who truly feels like an Everyman. Even (perhaps especially) when in costume, Kick-Ass embodies the inadequacies of those original comic-book creators. Unlike traditional heroes, that costume is Dave Lizewski’s secret identity – and if he doesn’t realise that at the start of his journey, it is made brutally clear to him by the end.

What Vaughn captures in a way no other comic-book director can is a chilling anxiety at the nature and consequences of Lizewski’s heroism. Superman, Spider-Man and Batman may suffer on screen, but it is distant – existential. Put Batman in a room full of drug dealers and you feel a sneaking sympathy for the bad guys. But when Kick-Ass is faced with the same, and the drug dealers are armed to the teeth, the danger to his life is real, the fear palpable.

And that is the point. Without this danger, Kick-Ass’ heroism would be an illusion. “If great responsibility only comes with great power, what does that say about the rest of us?” he asks, bloodied and broken after a beating from D’Amico’s goons. In comic-books, the bystanders are supposed to wait around until the hero shows up, but Kick-Ass is both bystander and hero rolled into one.

If only they’d had the courage to keep it that way. But the film ultimately defies its own logic. It desperately wants to play by real-world rules, but happily breaks them whenever the narrative demands. By the film’s finale, Kick-Ass has become both bolder and blander – more traditionally heroic, and so consequently less human.

But if all that makes the film sound heavy on the subtext, the surface delights are uniformly thrilling. Set-pieces are destructively choreographed and filmed with ruthless panache. There are no head-spinning cuts, just an elegant ballet of carnage that allows the audience to drink in every head shot, every knife to the chest, every blood-drenched dismemberment. Kick-Ass is both shockingly violent and riotously funny, with a script from Vaughn and Jane Goldman that pushes at the boundaries of respectability and then breaks right on through.

Their love of comic-book culture is clear, with nods and winks to classic titles alongside a sharp satire of the industry’s tendency to commercialise and exploit the latest trends. Vaughn also shows an unashamed affinity for videogame aesthetics, most obviously in the scene where Hit Girl takes out a roomful of bad guys in a manner lifted straight out of Modern Warfare.

If 2009 was the year in which Aaron Johnson was a potential movie star looking for a breakout role, Kick-Ass is the film in which he delivers on the promise. His muscular physicality translates into a commanding screen presence, scarcely concealed beneath Dave Lizewski’s cracked voice, glasses and greasy hair. It’s that ability to subsume himself in a character despite matinee idol looks that will serve him well in future, as will a surprisingly light comic touch, given full vent in one of the film’s standout scenes – Lizewski’s delusional De Niro moment in front of his bedroom mirror.

Alongside Johnson, 13-year-old Chloe Moretz gives an astonishingly mature (and foul-mouthed) performance as Hit Girl, an extension of her work in the recent (500) Days of Summer. She convincingly moulds innocence and violence into a coherent whole, with a standout moment against multiple thugs in D’Amico’s penthouse apartment that may well go down in geek history as one of the all time great on screen fights.

Scored to Joan Jett’s ‘Bad Reputation’, it’s also another example of the film’s flawless music choices, which include superb use of Sparks’ ‘This Town Ain’t Big Enough for the Both of Us’, and Gnarls Barkley’s ‘Crazy’. And after a decade of disappointments, Nic Cage follows his deranged turn in Werner Herzog’s Bad Lieutenant with another surprise. His campy, creepy, Adam West-inspired Big Daddy evokes memories of that younger, edgier actor before the pay-cheque performances diminished his reputation.

As an exercise in raw, pure, cinematic fun, it’s genuinely difficult to find fault with the bubble gum blitzkrieg of Kick-Ass. Even its occasional missteps, like the lingering close-up on a giant billboard of Claudia Schiffer (aka Mrs Matthew Vaughn), seem more like self-deprecating in-jokes than commercial hypocrisy. Among the heavy hitters of the superhero genre, it may not be the biggest, but Kick-Ass is definitely the brightest, and it may just be the best.

Emerged from relative obscurity with a sneak peak that sent the crowds crazy at Comic-Con in 2009.

With Edgar Wright’s Scott Pilgrim on the way later this year, Kick-Ass may be a harbinger of things to come. 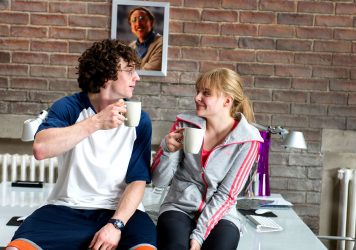 The juvenile comic book dirty bomb gets a sequel, and it’s a bit of a stinker...