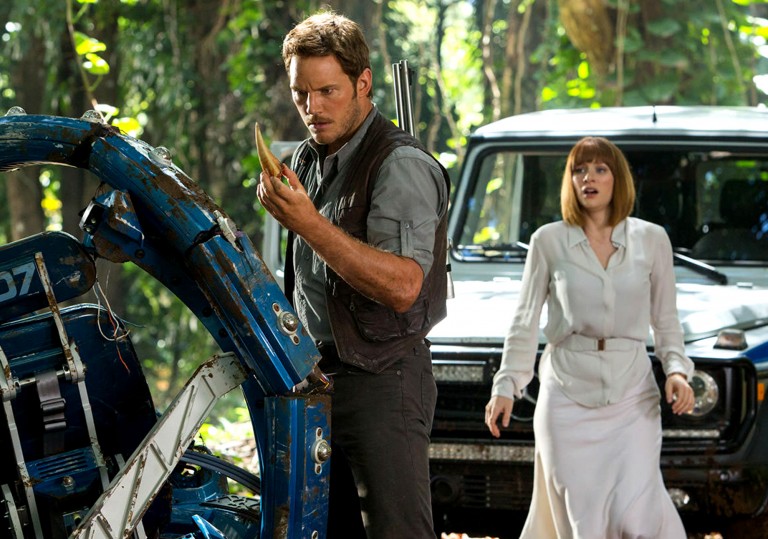 Finally, a chance to forget about the last two movies and give Jurassic Park the sequel it deserves.

It's two hours of dinosaurs eating people. Yes, it's enjoyable.

It's not about the size of the dinosaur, it's about how you use it.

There is exactly one brilliant moment in Colin Trevorrow’s Jurassic World: a teenage boy named Zach (Nick Robinson) strolls through the T-Rex exhibit at the eponymous amusement park, just one of the 20,000 visitors who will pass through the tropical tourist attraction that day. His phone rings; it’s his mom calling, and she wants to have a typical mom conversation.

As Zach turns his back to the viewing window in order to hear the voice on the other end of the line, the single most iconic film creature of the last 25 years loudly waddles through the background with an ancient roar. The crowd coos, doing their best to convince each other that they’ve just seen something awesome, but Zach doesn’t even flinch. The spectacle is about as exciting to him as last year’s Christmas presents.

Zach, of course, is meant to be our proxy, as jaded to mad scientist marvels of bioengineering as we supposedly are to the wonders of special effects. And it’s true that the sight of Stan Winston’s animatronic masterpiece (or its reanimated CGI incarnation) doesn’t inspire the same awe that it did when it first stomped over the wire fence of its original paddock in 1993. That sense of inurement is at the heart of the cynical Jurassic World, which has been mistakenly described as a reboot of Jurassic Park – it’s technically a direct sequel, but it would be more accurate to describe it as a misbegotten reckoning.

More than two decades after John Hammond’s beta test imploded in grand fashion, his dream has been realised and then some. Isla Nublar is now dominated by a theme park that makes Disneyland look like a street fair, the dinosaurs inhabiting a corporate paradise crisscrossed by monorails and overrun with families of tourists – there’s even a Starbucks (hell, there’s even a Margaritaville with Jimmy Buffett himself serving drinks). Once upon a time, the science required the money. Now, the money requires the science. Life funds a way.

The heart of Michael Crichton’s original novel was about how discovery and wonder are inevitably infected by business, and Jurassic World begins with the tail wagging the dinosaur so vigorously that they need to invent a monster big enough to stay on its feet.

In order to satiate the public and keep them coming back for more, InGen is compelled to create a new attraction every few years – as Claire (Bryce Dallas Howard), the park’s workaholic operational manager, puts it: “No one’s impressed by dinosaurs anymore.” And Claire is right. One hundred years ago, audiences were (apocryphally) astonished and terrified by the sight of a train pulling into a station. Earlier this summer this writer nearly fell asleep watching an intergalactic team of superheroes try to defeat an army of robots and prevent a falling city from crashing to Earth and triggering an extinction level event.

Enter Indominus Rex. The company’s latest and most colossally ill-advised idea is larger than a T-Rex, twice as bloodthirsty, and spliced with all sorts of fun new tricks. Needless to say, the ghost of J Robert Oppenheimer is rolling his eyes long before Indominus slips out of her pen and proceeds to run amok, destroying the park’s infrastructure and eating all of its prized attractions.

As the main event of this creature feature, Indominus Rex completely fails to capture the imagination. As a carnivorous metaphor for the dangers of confusing bigger with better, she’s only slightly more successful (the movie’s most intriguing new dinosaur is the aquatic Mosasaurus, a weightless CGI creation that nevertheless remains submerged for just long enough to tap into our collective fear of what lies beneath). This test tube behemoth isn’t just an expression of a creatively bankrupt cinematic culture, she’s also a client.

Trevorrow’s blockbuster, despite flirting with 22 Jump Street levels of winking self-reflexivity, lacks the vision or ambition to do anything more than diagnose a sickness that it’s powerless to cure. Its action sequences are bloodless and unexciting, and the theme park’s attractions – like the gyroscopes tourists use to roam the grounds, the most implausible thing in a movie that features Vincent D’Onofrio plotting to use Velociraptors to hunt ISIS – are transparently reverse engineered for their ability to motivate a set piece. As Jurassic World gets bigger, it only gets worse. Not since Spike Jonze’s Adaptation has a movie so gleefully become the thing it resents most.

In Jurassic Park, the prehistoric lizards were onscreen for a grand total of 15 minutes, which left the human characters to do much of the heavy lifting. In the sequels, however, the people have become distractions defined by their blunders, and Jurassic World – despite featuring the most series’ most charismatic cast since the original film – is all too eager to keep that tradition alive.

Claire is fun to watch, particularly when the movie allows her to run with its goofiest set piece (in high heels). As a strong woman who’s forced to confront her mistaken priorities, Howard does a decent job of muddying archetypes in a film that defaults to them far too often. But the Amblin logo really only means one thing: Kids are about to be in danger, and Trevorrow makes sure to put Zach and his excitable younger brother in plenty of it.

Neither of the youths is as annoying as franchise veterans have come to expect, but the fact that the boys are Claire’s nephews never feels like anything more than an excuse to dovetail their plots together. Likewise, the detail that Claire hasn’t seen them in seven years because she’s been too busy with her career, or that Zach’s parents may (or may not?) be divorcing, is even less important to the story than the plant-eating dinosaurs.

Alas, Jurassic World has a habit of giving the most attention to its least interesting components. Trevorrow so desperately wants Claire to be his most integral human, but the movie can’t help but dote on Owen (Chris Pratt), the roguish Velociraptor trainer who’s conscripted into subduing the rampaging Indominus. A lightning rod for idiotic subplots, Owen is a roguishly handsome wet blanket with a strange accent and a very dangerous job. Also, he has a pack of Velociraptors who effectively think he’s their daddy, and by the end of the movie they’ll be deployed to try and ride into battle with him.

It used to be that the transition of power from one grade of spectacle to the next was a violent function of the blockbuster food chain – in Jurassic Park III, the Spinosaurus had to fight and kill a T-Rex in order to win our attention. But now, it’s simply assumed that the big new thing is superior because it’s big and new, a self-fulfilling prophecy that Trevorrow’s film milks for 100 minutes only to insincerely reject during a climactic scene that preys on the audience’s nostalgia. It’s a fitting resolution for a movie that believes audiences are the problem (rather than just a part of it), and that the studios are to be pitied for having to be at their mercy.

The scene of Zach ignoring the T-Rex may be a clever illustration of how yesterday’s marvel can become today’s white noise, but Trevorrow gets one thing terribly wrong about it: the T-Rex isn’t boring because we’ve seen it before, it’s boring because it’s in captivity. The spectacle is big, it’s the imagination that got small.

Finally, a chance to forget about the last two movies and give Jurassic Park the sequel it deserves.

It's two hours of dinosaurs eating people. Yes, it's enjoyable.

It's not about the size of the dinosaur, it's about how you use it.