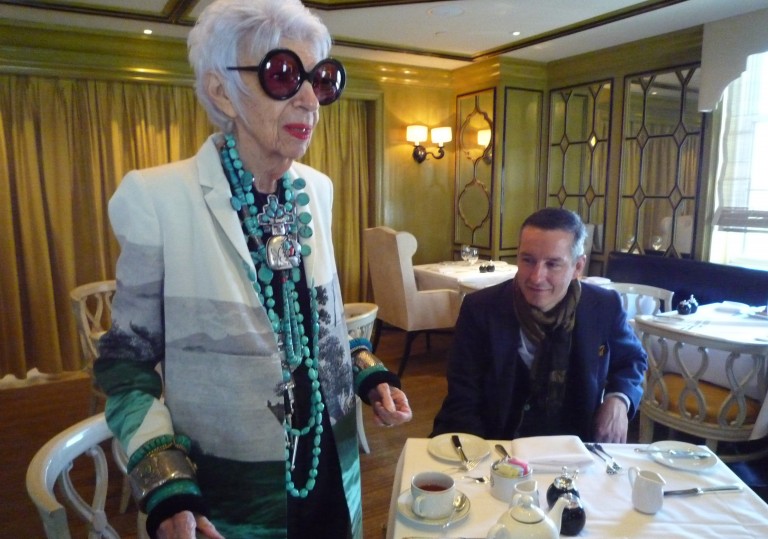 The penultimate film from the late, great Albert Maysles.

A vivid portrait of one of fashion’s true iconoclasts.

A love letter to individualism, and the love that fuels it.

From his short-form portraits of Marlon Brando and Muhammad Ali, to his feature-length studies of the Rolling Stones, the extended Kennedy-Onassis clan and door-to-door bible hawkers, eccentricity and performance have been constant bed-fellows in the work of the late Albert Maysles. His penultimate film – a tender, primary-coloured portrait of the fashion world’s favourite nonagenarian iconoclast – is cut from the same cloth, a fitting swansong for one of cinema’s foremost celebrators of curve-swerving individualism.

“I don’t have rules because I’d always be breaking them,” could be a line pulled from any Maysles documentary. It’s spoken here by Iris Apfel, one the world’s foremost collectors of couture jewellery and fashion. With her shock of white hair, over-sized glasses and vivid slash of the pinkest lipstick, this 93-year-old force of nature glides through the intersections of New York’s fashion, design and art scenes like a one-woman mobile installation. Maysles’ deceptively straightforward technique layers moments like his protagonist layers accessories. “I like to improvise,” says Iris, and Maysles echoes the jazz-inspired approach of his subject, building themes and returning to them with little regard for ostentatious displays of technique.

Iris explicitly acknowledges an early influence on her lifelong need to accumulate from the owner of a department store who once told her, “You’ll never be pretty, but it doesn’t matter, you have style.” Maysles finds subtle grace notes that further serve to psychologise her obsession, yet there’s little sense of an unmasking, as her art and self prove so contagiously fused to the joy she finds in ‘play’. What emerges as the backbone to Iris’ story and Maysles’ film is the significant supporting character found in her sharp, century-celebrating husband Carl. The filmmaker may be capturing a lifetime’s virtuosic solo, but underneath it all is a 70-year-long love story, keeping the beat.

The penultimate film from the late, great Albert Maysles.

A vivid portrait of one of fashion’s true iconoclasts.

A love letter to individualism, and the love that fuels it.