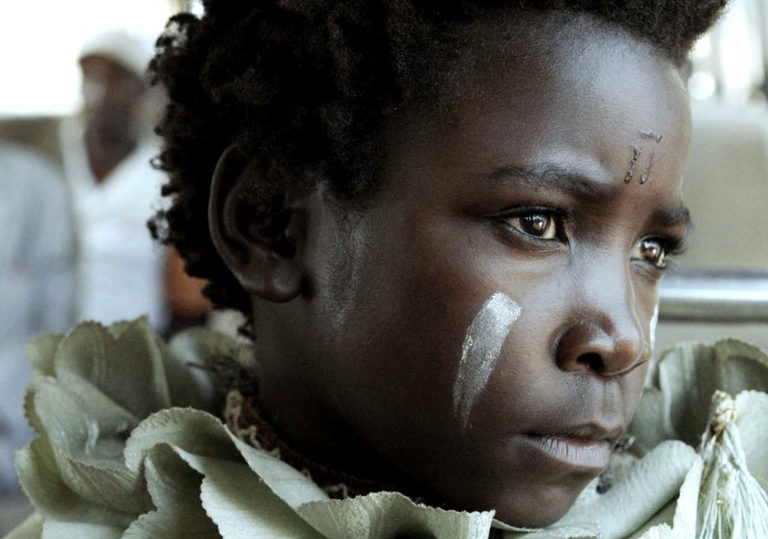 Due to the satirising of the subject, the viewer is left feeling at odds.

Director Rungano Nyoni’s debut feature is a “present-day satire about beliefs in witchcraft”. Filmed in Zambia, it takes a seething comical look at real-life ‘witch camps’ in Africa, with animal references only Monty Python fans would truly appreciate.

Following a banal incident in her local village, eight-year-old Shula (Maggie Mulubwa) is accused of witchcraft. After a short trial she is found guilty, taken into state custody and exiled to a witch camp in the middle of a desert. At the camp she takes part in an initiation ceremony where she is shown the rules surrounding her new life as a witch. Like the other residents, Shula is tied to a ribbon which is attached to a coil that perches in a large tree. She is told that should she ever cut the ribbon, she’ll be cursed and transformed into a goat.

Read our interview with Rungano Nyoni

The director’s lucid, Brechtian influenced (no surprise considering her theatre school roots) style works as both a positive and negative. On the positive side, it removes any sense of analytic subjectivity in the episodic format – but it also makes the unfolding narrative hard to follow in places. A final tragic plot twist is poorly understood, and sharply executed, denying the story of the poignant emotional force it might have collated in a more conventionally structured drama. This may be Nyoni’s intention, but such arty detachment will alienate some of the film’s potential audience.

Framed with an impressive symmetrical composition by David Gallego, who also shot Ciro Guerra’s 2015 film Embrace of the Serpent in ravishing monochrome, I Am Not a Witch is heavily stylised in places, with sparing use of freeze-frame shots and a subtle black and white colour palette, added for dreamlike effect.

Having established the disdain for pagan witch murderers, who tether them to the ground with ribbons. Nyoni illustrates this disturbing reality by making great use of these visually striking streamers, weaving them into what resembles giant art installations. Also worthy of referencing are the stunning costume designs by Holly Rebecca, a sometime stylist for singer Solange Knowles.

Nyoni counterpoints the long, deep, sultry silences of the Zambian bush with bright splashes of music, including haunting choral chants, jumping bursts of Vivaldi, disorientating snatches of Europop and jazzy percussive audio trimmings that blur the line between score and audio design. I Am Not a Witch feels like the emergence of a distinctive new voice. It’s just a shame that in the last few scenes the viewers is left adrift among the symbolism, due to Nyoni’s sparse storytelling.

Due to the satirising of the subject, the viewer is left feeling at odds. 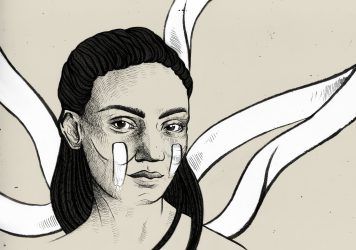 Rungano Nyoni: ‘I wanted to show Zambian humour and how we deal with tragic events’

The Welsh-Zambian director discusses her impressive debut feature I Am Not a Witch.