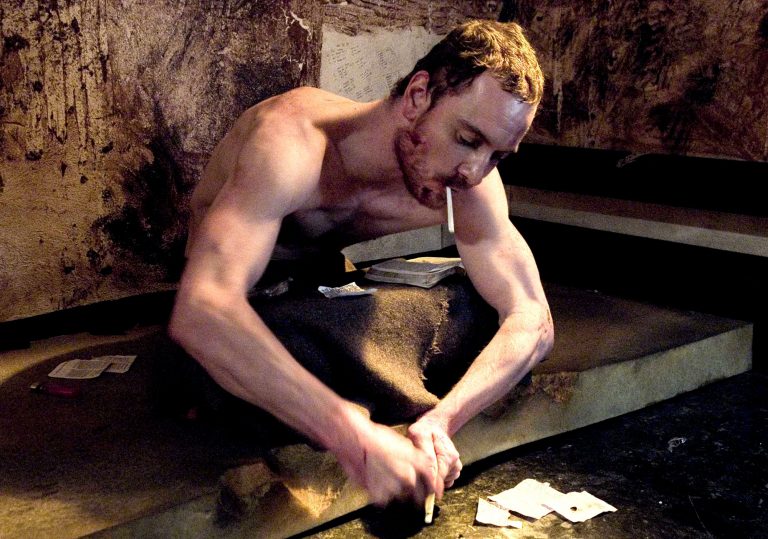 IRA films have a mixed history – hope for another Bloody Sunday, fear another In The Name of the Father.

An uneasy but urgent experience.

Raises important questions about our past, but never at the expense of a dramatic narrative.

Shooting on location in the harsh, geometric spaces of the Maze prison, Steve McQueen has produced a biopic of IRA hunger striker Bobby Sands that is doused in violence. It is the violence of the wardens against the inmates. It is the violence returned by the inmates themselves. But it is also the violence of cinema – the lurking, lingering gaze of McQueen’s camera; the sickening slaps of flesh on concrete; the echo of all the horrors that the Maze has seen and heard.

Bobby Sands (Michael Fassbender) – gunman, politician and martyr – was the leader of the IRA inmates at the infamous Maze prison in Northern Ireland, who were protesting their right to be recognised as political detainees. When Thatcher’s government refused to negotiate, preferring instead to beat the opposition out of them, Sands went against orders to stage his second hunger strike, one that would eventually lead to the death of 10 prisoners.

It’s fashionable to talk about artists-turned-filmmakers who treat cinema like a canvas, but McQueen (whose last exhibition saw him put the faces of Britain’s Iraq War dead on stamps) has brought the full dimensions of the medium to bear. And in Michael Fassbender, he has himself a charismatic performer at the top of his game.

This is a star-making turn for Fassbender (or perhaps a star-cementing one, given his recent ubiquity), which has something of the Christian Bale in both its physical commitment, and the depths to which he is able to disappear into his character. It’s a twitchy performance that lapses into stillness only in the film’s signature scene, a 20-minute single take in which Sands and a priest debate the morality of his actions.

If that sounds contrived, in fact it brilliantly takes Hunger beyond its comfort zone as historical drama, and brings it into the queasy light of the present day. It begs the question: where else in the world might these conversations be applied? And, with an icy clarity, it sets about implicitly dismantling the narrative of British self-identity.

We see ourselves as a country that has always been on the right side, acting in the right way. And yet, says McQueen, we have a history of using propaganda and violence to distort or destroy uncomfortable truths. And if we did it then, perhaps we are still doing it now.

But for all that Hunger is a rough, gruff and aggressive experience, the message never overshadows the drama. And though, at the very end, McQueen finally diverts from the path of ugly realism into visual metaphor, it’s a small slip in a film that otherwise oozes ambition.

IRA films have a mixed history – hope for another Bloody Sunday, fear another In The Name of the Father.

An uneasy but urgent experience.

Raises important questions about our past, but never at the expense of a dramatic narrative.