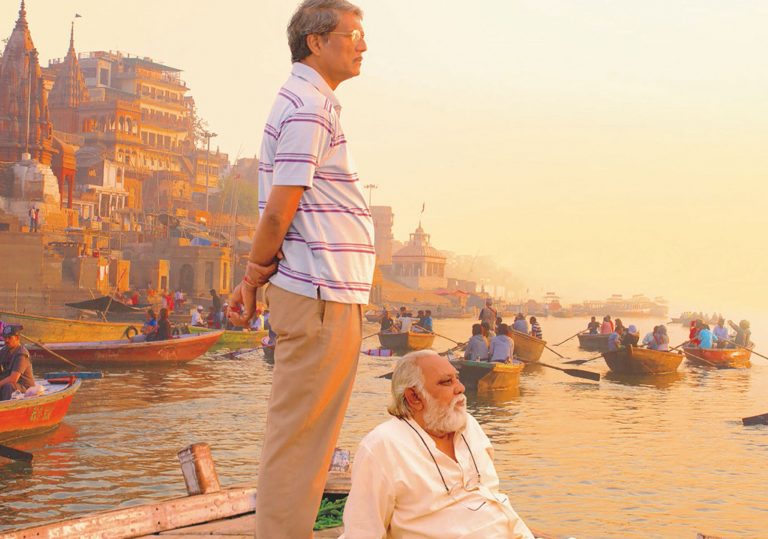 A rare non-Bollywood film from India receives a UK release.

Highly satisfying in many senses: audio-visually, emotionally and spiritually.

Proof that films do not lean on high drama to transmit a powerful message.

This gently profound Indian comedy sees a father travel across country with his son to face off with death.

Inspired by India’s path towards becoming a global superpower, Hotel Salvation is Shubhashish Bhutiani’s love letter to the country of his birth. It follows Daya (Lalit Behl), a 77 year-old man whose self imposed journey towards death leads him to the eponymous venue, accompanied by his sceptical yet respectful son, Rajiv (Adil Hussain). Located in the holy city of Varanasi, the hotel borders the banks of the Ganges and is a sanctuary where the elderly can reside while they await their departure from the world of the living.

Paradoxically, both its atmosphere and the guests themselves are cheery and vibrant. If artistic treatments of death are often powered by sadness and grief, this film takes the opposite tack. It saturates the screen with India’s bright and vivid colours. The expressions of human warmth make it an ode to life. Along with the son, the film invites the viewer to embrace death as natural occurrence rather than a cause for torment and pain.

The film’s DIY spirit is reflected in a multitude of charming everyday scenes. Sometimes we see beautiful landscapes, sometimes boisterous streets or markets filled with people in kaleidoscopic saris and dresses, or families and friends sharing home cooked meals or admiring dazzling light shows over the Ganges. In other words, it is in the film’s simplicity and authenticity that makes it work so well.

Many of the substantial shifts occurring in Indian society are subtly touched upon: globalisation (through an iconic Pepsi bottle), digitalisation, generational gaps and female emancipation. Writer/director Bhutiani draws a poetic portrait of a modern India, gently unveiling the strain between technology and tradition.

In one scene Rajiv’s phone interrupts meditation practise with the priest, while his sister announces her refusal of the arranged marriage over a fuzzy and glitchy Skype session. Yet the film never dwells on this internal conflict, always presenting its subject with humour and an infectious sense of optimism.

A rare non-Bollywood film from India receives a UK release.

Highly satisfying in many senses: audio-visually, emotionally and spiritually.

Proof that films do not lean on high drama to transmit a powerful message.