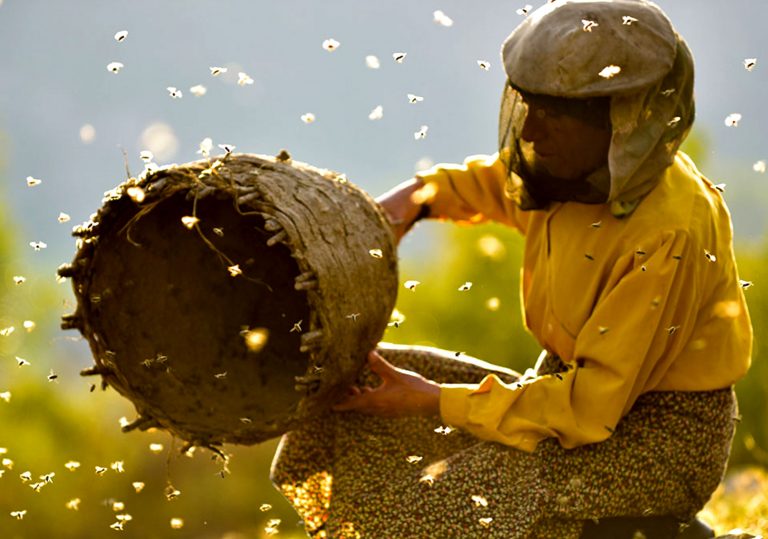 Fresh new talent lauded at Sundance could be sweet.

Provides plenty of food for thought.

A meditative documentary worth some of its buzz.

Besides the swarm of memes riffing on the 2007 DreamWorks animation Bee Movie, starring Jerry Seinfeld as a bee, our relationship with the humble insect has seldom been explored on screen. While the Macedonian documentary, Honeyland, is unlikely to benefit from that movie’s inexplicable buzz in terms of box office success, it does prompt the viewer to consider the extent to which the little critters deserve our empathy. It is a reflection on the relationship between woman and nature, and it even runs with the Bee Movie dictum that bees can fly because “bees don’t care what humans think”.

We meet Hatidze Muratova, a tireless Turk who lives in a derelict village, as she climbs a mountain to uncover honeycomb from beneath the rocks. It is an evocative celebration of nature – the camera lingers from a distance as she crosses the sun-soaked horizon, the screen awash with amber hues. She lives on the natural bounty of the earth, enjoying what the film suggests is an idyllic rural life away from the bustling markets where she flogs her produce.

The problem is when it comes to accepting her behaviour as humane. Hatidze pulls apart the bees’ home and then bathes them in smoke. Honeyland questions whether humans are able to form relationships with bees, contributing to a debate among vegans about their quality of life. In 2018, the Australian documentary Dominion highlighted animals’ human-like emotions through extreme close-ups of their eyes. Bees, on the other hand, do not have expressive facial features, making it more challenging for the viewer to empathise with the bees in the same way that it is possible to do with Hatidze.

Making their debut feature outing, directors Ljubo Stefanov and Tamara Kotevska do their utmost to get as close as they can to the bees. We watch in awe as the bees climb onto a leaf to escape drowning in a well of water. It is unexpectedly moving to witness a bee clutch the seemingly lifeless body of a family member. The bees seem all the more relatable after Hatidze’s quiet home is invaded by a brutal family of cowherders who exploit her trade. It’s a challenging watch at times, and the acceptance of cultural relativism becomes difficult when physical punishment for a child is normalised or a calf is strangled by a badly tied rope.

Hatidze stands as a charming counterpoint to all this – she adores the radio and shares her food with the local children as if she were a Macedonian Maria von Trapp. We watch her daily walks to see the bees, and for all the stillness of the world, the hills truly do come alive. Winter arrives and, having wrought their havoc, the cowherder interlopers up and leave. Hatidze is now alone, pondering why she never married and had children of her own. It is striking that these anxieties have not been mentioned before, and we part ways with a tableau of human misery.

Brief and to the point, Honeyland proves more meditative than its premise suggests. The differences between bees and humans can, previously explored by our friends at DreamWorks Animations, has now been expanded upon. Maybe bees don’t care what humans think, but we should certainly learn to care for them.

Fresh new talent lauded at Sundance could be sweet.

Provides plenty of food for thought.

A meditative documentary worth some of its buzz.