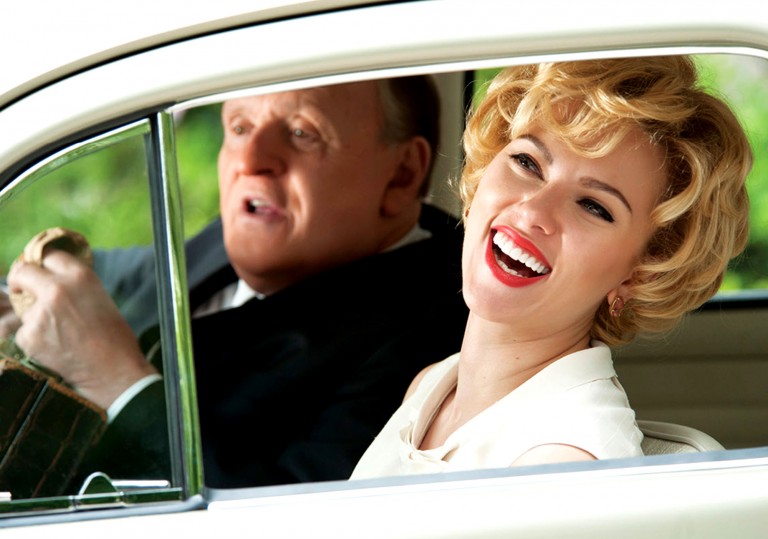 Another biopic that’s all filler and no killer?

Hitchcock’s darker impulses are repressed in favour of timid melodrama and historical revisionism.

Unlike Hitchcock’s work, it fades from memory almost immediately.

The Master of Suspense gets his very own glib and psychologically-stilted Wiki-biopic.

Serial killer Ed Gein (Michael Wincott) kicks off Sacha Gervasi’s Hitchcock with a resounding statement: he uses a shovel to pummel his first victim to death. When the camera pans to the right, it reveals a slightly revolted yet deeply intrigued Alfred Hitchcock (Anthony Hopkins) watching the heinous action unfold from a mere few feet away.

It immediately connects the mass murderer and iconic filmmaker in a darkly comic way. If only the rest of Hitchcock were as interested in the morbid relationship between true crime and art as this spatially dynamic time capsule. History tells us that Gein committed more murders – many more, in fact – and his horrific exploits would inspire Robert Bloch’s 1959 novel ‘Psycho’ and Hitchcock’s classic 1960 film of the same name.

But in a strange and somewhat disturbing way, Gein is also the jet-black soul of Gervasi’s otherwise middling biopic, appearing throughout like a ghostly mentor to promote Hitchcock’s darkest urges and sadistic tendencies. Their surreal scenes together crackle with intensity and uncertainty, proving that Hitchcock’s artistic arrogance and exterior confidence are merely moments away from disintegration.

Much of Hitchcock follows the embattled filmmaker as he attempts to overcome these demons while circumventing Hollywood gossip and economic blockades to fund, cast, direct and edit Psycho. Deemed too old to tackle such seedy material by various pundits, Hitchcock revolts against convention and self-finances the film, much to the chagrin of Paramount Pictures, who wants him to tackle something safer and ensure a return on investment.

Once on set, the film portrays Janet Leigh (Scarlett Johansson) as a sexy, classy and artistically game actress who survives Hitchcock’s intense directing process. Anthony Perkins (James D’Arcy) comes across as a wide-eyed sponge willing to soak up Hitch’s particular brand of crazy in order to inhabit the character of Norman Bates. But Hitchcock is not about film directing or acting or even the ebbs and flows of the artistic process.

The tumult and unpredictability inherent to the film production is often pushed to the background in favor of melodrama concerning Hitchcock’s faltering relationship with his longtime collaborator and wife Alma Reville (Helen Mirren). Seeds of doubt and jealousy flower on both sides, especially when a charming novelist (Danny Huston) courts Alma to help edit his latest book.

This friction sets the stage for verbal standoffs a-plenty that collectively hint at the possibility of brutal violence, either through shades of voyeurism or crescendos of music used to convey psychological fragility. It’s not surprising that Gein often materialises when Hitch reaches the pinnacle of his rage.

Still, Gervasi – a director best known for his 2008 documentary Anvil! The Story Of Anvil – seems entirely overwhelmed by the historical and cultural weight of his subject, unsure of which tone to embrace. There are plenty of clever bits about Hitchcock and film history in general (Vertigo and Winchester ’73 are both referenced as pejoratives), but the film lacks any cohesive visual style or dynamic audio design to bring it all together.

The line between sanity and insanity, life and death, Hitchcock and Gein may be a thin red one, but the film itself never has the ambition or desire to examine why.

Another biopic that’s all filler and no killer?

Hitchcock’s darker impulses are repressed in favour of timid melodrama and historical revisionism.

Unlike Hitchcock’s work, it fades from memory almost immediately.