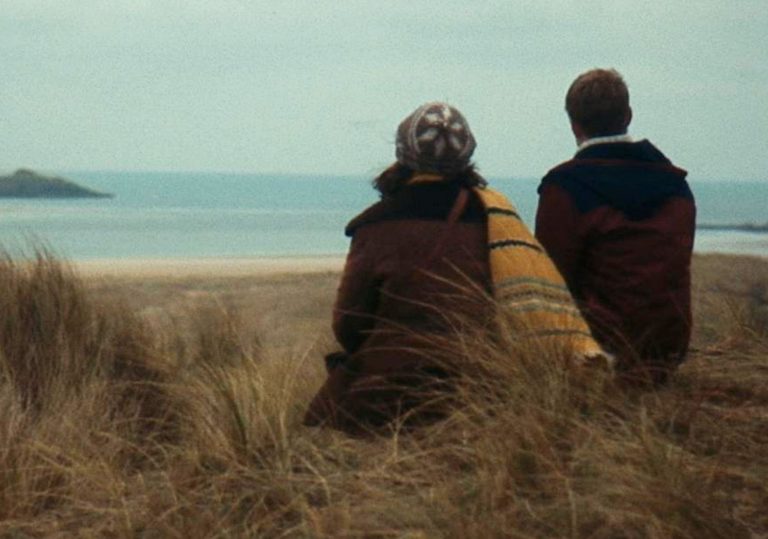 Macqueen has talent that could lead to another better film.

Shot on the desolate, beautiful Cornish coastline for £10,000, British independent filmmaker Harry Macqueen’s debut feature is curiosity-inducing without being convincing. Concerning a weekend in the life of Harvey (Macqueen) and his long-lost friend Lola (Lori Campbell), Hinterland drenches slow-burn character development in depictions of nature’s might. It then undoes the good work by hitting false notes during its painstakingly established emotional crescendo.

Harvey and Lola are the sole characters, and the double mystery of who they are and their relationship to one another is subtly gripping from the moment the former picks up the latter and her guitar from a grimy London hovel. He drives her to the cottage that they used to frequent with their families as kids. She is a travelling musician who has just returned from America for an unspecified reason that doesn’t seem to bode well.

Campbell has a natural, free-spirited energy that complements the more taciturn and introspective character of Harvey. He is initially presented as the selfless saviour but she returns the favour through the medium of fun. Macqueen layers up his role showing a surface awkwardness that gives way to enjoyment and pleasure at Lori’s impulsive suggestions. Witness horse photography, fishing and all manner of innocent larks experienced as sea-wind whips hair and ragged hills telegraph isolation. These youthful hi-jinx have a gravitas. They are nostalgic diversions to mark time as the pair build up the courage to talk about real shit.

Macqueen played his ace by realising that he and Campbell have an easy on-screen chemistry. Their rapport works best when riffing over the little things. The details of the disruption that drove Lola back home emerge prompting mutual revelations of dissatisfaction with life. These outbursts sit awkwardly in the characters’ mouths feeling more like a writer’s structural decision of ‘insert climax here’ than organic evolutions of scenes. This debut shows Macqueen’s capacity to capture natural rhythms in people and in landscapes. Where he comes unstuck is in the distractingly contrived elements of his filmmaking.

Macqueen has talent that could lead to another better film.