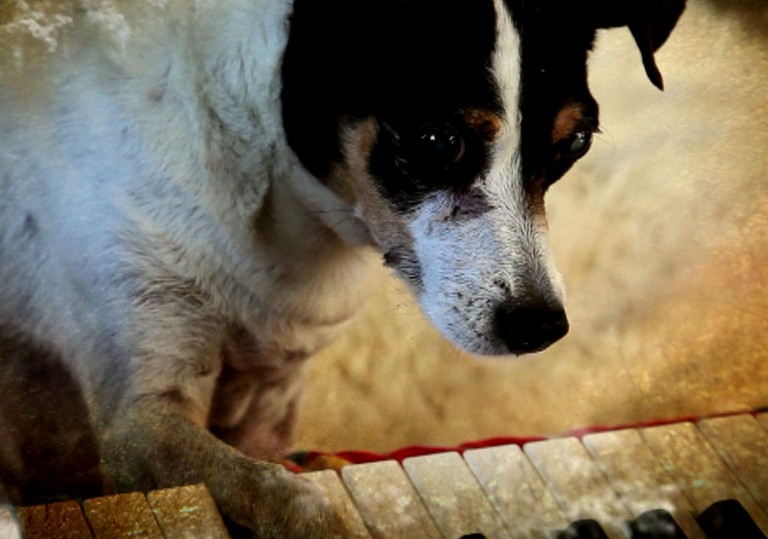 An essay film about a dog? We’ll bite.

Laurie Anderson’s requiem for many dreams...

...and the rebirth of so many more.

Laurie Anderson’s voice has the quality of a meditative yoga instructor. During Heart of a Dog, she speaks precisely and calmly over a collage of expressionist images, as if to hypnotise the viewer into a perpetual dream state. The result is a moving essay film that lulls you into a sensory-laden trance. In this headspace, we are given the freedom to consider storytelling and memory in a new light. Call and response questions provide otherworldly assurance. ‘What are days for? To wake you up. What are nights for? To fall through time.’

Covering a lot of philosophical and emotional terrain in a mere 75 minutes, Anderson contemplates everything from post-9/11 New York City, the ‘Tibetan Book of the Dead’, Kierkegaard and Wittgenstein. But her beloved rat terrier, Lolabelle, and how she perceives the world, remains the essential pivot point. Curious, loyal, and always up for a good time, the canine plays a central role in the film’s examination of death and perseverance, becoming a spiritual conduit to what Anderson calls, “living in the gap between the moment that is expiring and the one that is arising.”

Riddled with tangential threads, manipulated film stock, and a welter of superimposed images, Heart of a Dog swirls together colours and textures like raging rapids. Water droplets slide down panes of glass. CCTV footage numbly tracks everyday citizens. Opposing styles don’t just attract automatically, but Anderson proves a master of placing them together to feel less disjointed. She manipulates footage of home movies, and then animates it, providing it with new life and elasticity. Her perspective, like the one she imagines Lolabelle to be experiencing, favours malleability over limitation. This approach comes to fruition when Anderson tells the story of her mother’s deathbed ramblings, and when she begins to grapple with Lolabelle’s late-life blindness and degenerating health.

Language becomes the great unifier in Heart of a Dog. Anderson’s nimble words cascade together, gathering momentum and meaning through jarring edits and clashes of imagery. As Lolabelle passes on, Anderson becomes her shaman-like guide: “You are not alone in leaving this world,” she says. Through it all we get a glimpse at unselfish love, one woman’s struggle to release the pain rather than see it as a symbol of selfish regret. “Every love story is a ghost story.” Anderson believes in the profundity of this David Foster Wallace quote. It’s why her film is just as much about the loss of her husband, legendary singer Lou Reed, who died of liver disease in 2013. His dynamic energy can be felt in every single frame. Maybe that’s why Anderson, a self-described “sky worshipper,” spends so much time looking up, reconfiguring the definition of absence to mean something more hopeful and timeless.

The film’s illusory qualities are always deeply personal, never more so during Anderson’s introduction to one of her final anecdotes: “Let me tell you a story about a story.” Within this layered construct, ghosts need comfort too, and the film’s last gasp suggests that she is guiding Lolabelle toward a new beginning. Death becomes her, and all of us eventually. But to paraphrase Reed, that’s just the inevitability of time turning us around.

An essay film about a dog? We’ll bite.

Laurie Anderson’s requiem for many dreams...

...and the rebirth of so many more.