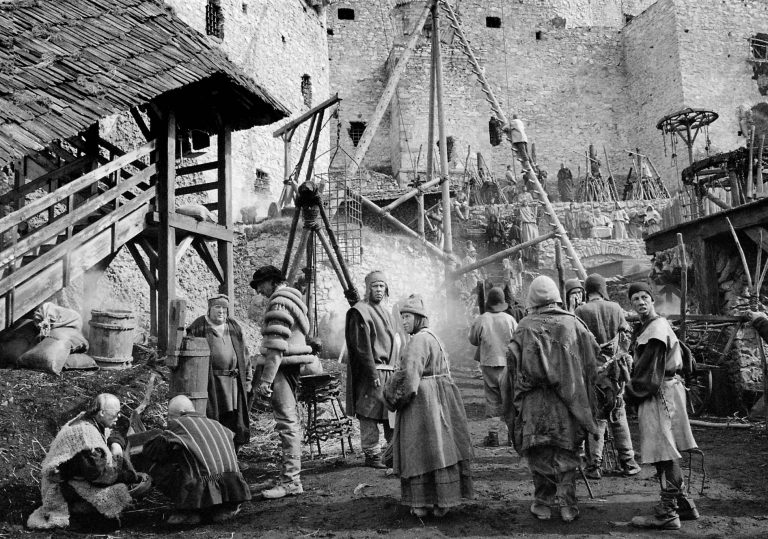 A cinephile fever dream 15 years in the making.

Not the easiest ride, but every frame blazes with life... and death.

Some 15 years in production, Aleksey German’s Hard to be a God has taken on almost mythic status for cinephiles salivating at the prospect of its completion. Employing a perfectionist’s eye for detail that makes Kubrick and Cimino look like Friedberg and Seltzer, German spent six whole years on principal photography alone. That every second of effort made it onto the screen is testament to this singular filmmaker’s fervent commitment to his expansive vision. There are no bones to be made about it, Hard to be a God is a modern masterpiece.

Adapted from the novel by Boris and Arkady Strugatsky, the sci-fi visionaries responsible for Roadside Picnic (on which Tarkovsky’s Stalker was based), Hard to be a God tells of a planet identical to Earth, only 800 years culturally behind. For all intent and purpose it’s the Middle Ages, the planet’s Renaissance having been actively suppressed by a ruling nobility and warring military factions. Intellectuals are being rounded up and murdered, hence the protagonist, Don Rumata – an anthropologist sent from Earth to usher in and report on a forthcoming age of enlightenment that never materialised – disguising himself as a local lord, a descendant of a pagan god and witness to the filth and degradation that surrounds him.

Yet Hard to be a God is little concerned with following any traditional approach to narrative, as this is a sensory cinematic experience like no other – a wholly immersive plunge into the mud, the blood, the snot and the shit of a viscerally realised world. German forges a mise-en-scene like nothing else, packing every corner of every frame with incident and detail. Yes, this is a three hour, black and white Russian film, but there’s nothing austere about German’s images, the screen is bursting with life (or as often, death), the camera in perpetual motion in, around and through the guts of humanity.

Characters break the camera’s fourth wall with abandon, often performing for its benefit, only to be shoved out of the way. German composes across every axis of the frame, layering his images as though for a 3D camera, as the textures rendered by cinematographers Vladimir Ilin and Yuri Klimenko simply defy belief. It’s a film to be seen big, and without question to be seen more than once. Not only are there narrative and thematic riches to be excavated, but the sheer sensory tactility of the experience – there’s just so much to take in – is enough to overwhelm the first time round.

That so much time was spent in post-production on the film’s aural soundscape pays dividends, and the masterful editing is often close to invisible. Sequences pulse and throb through extended takes, as even the smells(!) of the world seem to be tangibly transmitted. It’s difficult to draw comparison with the work of any other filmmakers as a point of reference, so unique is German’s vision. Tarkovsky’s Andrei Rublev, Tarr’s Sátántángó, Pasolini and even Gilliam fleetingly popped up, but they remain superficial touchstones. So distinctive an experience is Hard to be a God, it’ll have to suffice to say this at least stands shoulder to shoulder with the aforementioned.

There’s an inescapable political allegory at play here, casting its protagonist as a figure of insight yet impotence, resigned to the ineffectiveness of individual action in the face of social apathy and fascist might. Hard to be a God fuses its history – past, present and future, even alien planets, it’s all the same quagmire of shit and brutality. German never got to see his masterwork premiere at Rome back in November, having passed away earlier last year. His son added the final touches to the film his father had begun pre-production on in 1998. A masterpiece more than fifteen years in the making, from a director none of whose films are available on DVD in the West. On the strength of this jaw-dropping piece of work alone, that needs to change. That needs to change now.

A cinephile fever dream 15 years in the making.

Not the easiest ride, but every frame blazes with life... and death.