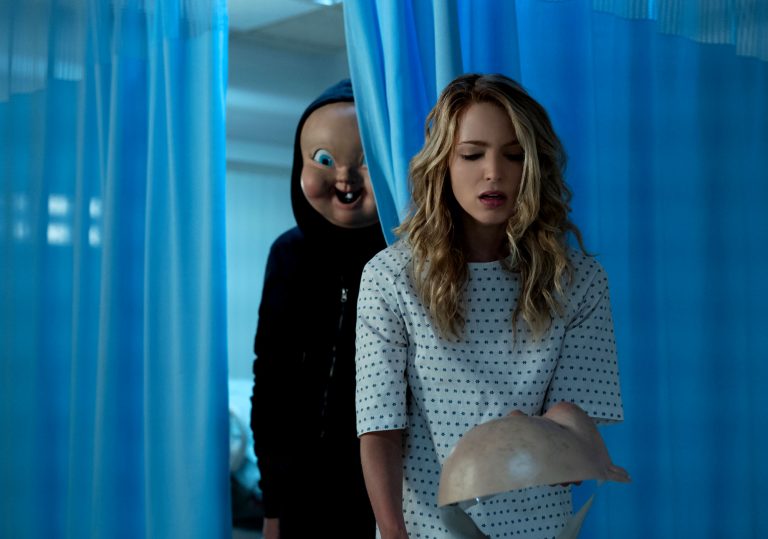 Where can they go from there?

Even more gripping than the first one.

That was a lot, in a good way!

The original Happy Death Day ended with several question marks hanging over it, chief among them being the role of morality in the whole affair. Like Bill Murray in Groundhog Day (which is explicitly referenced at the end of the film), anti-heroine Tree (Jessica Rothe) eventually learns to be kinder to those around her. Unlike Phil Connors, she also had to contend with a masked killer who was murdering her at the end of each day. Only once she identified and killed this person did Tree break the curse – karmic punishment, it turns out, had nothing to do with it.

Viewers have had plenty of time to get worked up about this lack of answers, but Happy Death Day 2U, which picks up directly after the events of the first film, doesn’t afford its characters the same leisure: they’re too busy trying to survive to think about anything else. The quantity of plot holes that the sequel is tasked with rectifying is daunting, but one detail from the first film hinted at the possibility of a coherent explanation: the unexplained power failure that occurred within Tree’s repeated day. Anyone who’s seen Back to the Future knows that no one can talk about time travel without mentioning parallel dimensions (except maybe Bill Murray). So, Tree is here again, reliving that same day – only not exactly as before.

The film spends much of its first act enmeshed in wordy scientific explanations, though there are salutary attempts to make these as fun and easily digestible as possible. At one point, a character stabs a pen through a folded piece of paper, like in Interstellar and Event Horizon.

The imposed time limit prevents the film from ever sinking into boredom. Far from relying solely on this structural device, writer/director Christopher Landon finds ingenious ways to explore the setup to its full emotional potential. After everything that Tree managed to achieve first time around – becoming a better person, finding a lovely boyfriend in Carter (Israel Broussard) and stopping a serial killer’s murder spree – the fact that she has to start all over again is genuinely heartbreaking.

But the breach in the space-time continuum brings with it other, unexpected changes which are even harder for Tree to reckon with. While the first film focused on having the courage to change things – on seizing the day and the future – Happy Death Day 2U dips into the even murkier waters of the past: the things that cannot be changed. This may not be a film about karma, but it is definitely about consequences.

With one particularly affecting sequence, the film joins the ranks of Bumblebee as an unexpectedly poignant genre movie aimed at teenagers. Rothe does an impressive job of keeping our attention throughout this intense whirlwind of a film, convincing in both its emotional moments and its lighter ones, of which there are plenty. Elsewhere, the three quantum physics students seemingly responsible for the whole mess are played by actors so loveable it seems safe to assume the next sequel will give them more to do.

The film owes its genre credentials to the extreme darkness of its concept rather than to graphic violence; some may argue it doesn’t even qualify as horror. In truth, it doesn’t need such qualifiers: combining a fun and silly genre approach to the concept of dying with an earnest consideration of its real-life consequences, Happy Death Day 2U is simply a matter of life and death, both literally and figuratively speaking.

Where can they go from there?

Even more gripping than the first one.

That was a lot, in a good way!