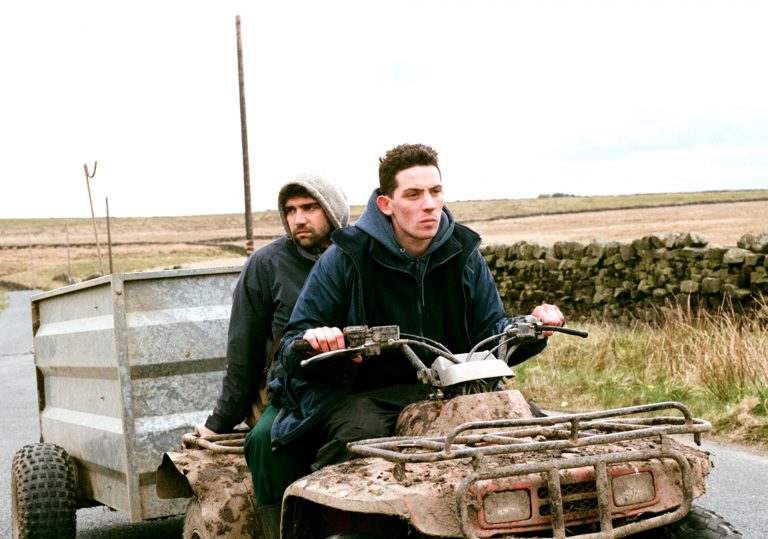 Starts off with familiar grungy naturalism, then gets sensual, emotive and spiritual.

You’ll find yourself getting teary a week later – a potent, haunting meditation on the soul-stirring significance of being open to love.

It’s just about the greatest two-word line of dialogue you could imagine. Johnny, our abrasive, troubled, twenty-ish Yorkshire farmer, has just buggered some lithe young chap in a horsebox. No apologies for using that word either, since this is an act of aggression and domination. Still, the victim wonders if ‘we’ could go for a drink sometime, and gets a brusque slap-down for his pains. “No we” says Johnny, and at this stage in the proceedings that sums him up precisely.

So far as family, friends and everyone else is concerned, he’s a scrunched-up ball of scorn, bitter at struggling to keep the farm a oat while his ailing old dad keeps telling him what to do. And Josh O’Connor’s compelling central performance gives it all to us unvarnished and raw. Then we see him alone with one of the family’s cows. Softly-spoken and genuine in his concern, even while he has a plastic-wrapped arm elbow-deep in her behind. Evidently, there’s tenderness lurking within his gruff exterior, but will it ever emerge from behind the wall of bitterness he’s put up between himself and the world?

Ten minutes in, and with masterly economy, first-time writer/director Francis Lee has set up a drama of universal resonance within a highly specific local landscape. Furthermore, there’s something utterly archetypal about the way a stranger entering this environment proves the catalyst to move everything forward. Gheorghe (Alec Secareanu) is a wily Romanian migrant, taken on as a hired hand, who’s a dab hand at lambing, knows his way round a dry-stone wall, and, more importantly, transmutes Johnny’s sexual advances into something a whole lot more sensual.

He might at first seem a bit too good to be true, yet in expressing his nurturing instincts towards another man in a way which would never have been possible in his homeland, this wise traveller opens up whole new vistas for the emotionally closed-in protagonist. Indeed, what’s quite magical here, is the way in which a lm so seemingly austere and undemonstrative in its washed-out colour and no-frills camerawork, uses sparing means – the primacy of touch, a glint of sunlight, flowers on a kitchen table, the ecstatic drone of A Winged Victory for the Sullen’s stealthy score – to convey the sudden blessing of love. To show us and Johnny how its dizzying, transformative vulnerability, can bring life even more alive.

For all the ways in which the subject matter apparently touches on very public issues (the economy of the land, LGBT rights, post-Brexit attitudes), in essence the film is absolutely intimate and personal, shaped by marvellously believable performances and ultimately achieving a heart-rending authenticity. Taking characters and audience alike on a soul- stirring journey, in British cinema terms, it’s surely a throwback to the era of autobiographical trilogies of Terence Davies and Bill Douglas – films which start out with their feet on the ground yet reach to the heavens.

For fortysomething filmmaker Lee, it’s an outstanding achievement, perhaps the strongest British deebut since Lynne Ramsay’s Ratcatcher. No doubt about it, there’s a lifetime’s craft, wisdom and tears packed into this eloquent statement of emotional and spiritual possibilities.

Starts off with familiar grungy naturalism, then gets sensual, emotive and spiritual.

You’ll find yourself getting teary a week later – a potent, haunting meditation on the soul-stirring significance of being open to love.