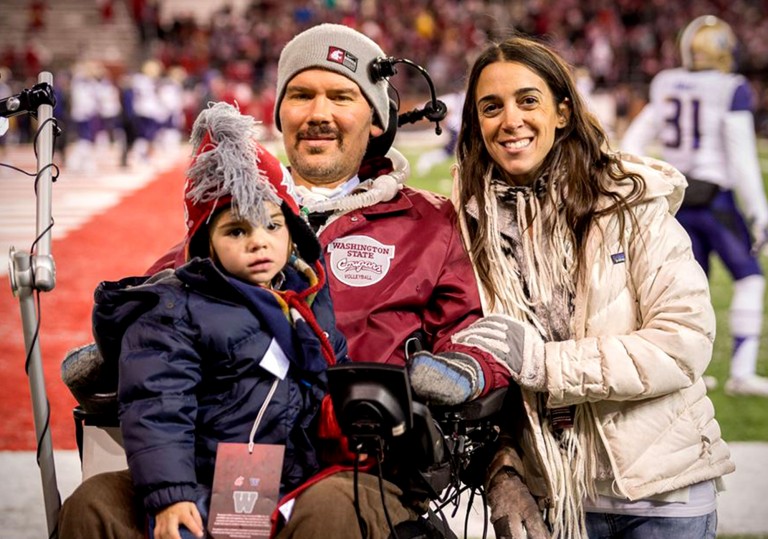 A portrait of an NFL star with ALS? Could go either way.

Watching the decay of one man’s physical well-being is tough, but it’s livened by humour and genuine soul.

As inspiring as it is devastating.

This portrait of a former NFL star suffering from a rare neurological disease is as life-affirming as it is heartbreaking.

Watching Gleason, a documentary depicting former NFL superstar Steve Gleason’s battle with ALS, you’re constantly ducking and covering, bracing for the devastating gut-punch that feels inevitable. But it never comes. The film cuts to black, the credits roll. To our relief no tragedy is shown because it hasn’t happened yet. To this day, against all odds, Gleason is still alive and fighting.

The film opens with Steve sat in his room, his thoughts spilling out for the camera. He explains that he’s been diagnosed with amyotrophic lateral sclerosis, also named Lou Gehrig’s disease (aka ALS), and that it will ravage his body, strip him of his ability to speak, and eventually kill him. As if that wasn’t enough, just weeks after his diagnosis, he discovers that his wife, Michel, is pregnant.

But in between these two bombshells, Steve spies an opportunity. He realises that even if the disease doesn’t kill him before his son, Rivers, is old enough to remember him, his symptoms will be so advanced that his son will grow up with no knowledge of the spirited character he once was. He realises that, be it through death or the loss of his speech, he’ll never be able to have an honest conversation with his son. So he commits to recording regular video journals and eventually a documentary to say everything he possibly can with the time he has left. The way he sees it, even if he doesn’t make it through his son’s formative years, he’ll have left enough of himself behind for Rivers to get to know his dad even in his absence.

And boy, is Rivers in for one hell of a portrait. Gleason doesn’t just explore his father as a stunning athlete and as a vibrant, intelligent soul. It paints a picture of an entire family struggling to maintain hope as the light is slowly smothered out of their lives. As Steve’s disease cripples him, he relies more and more on Michel to provide around the clock care, and through her struggle to maintain energy, she begins to sacrifice parts of herself to maintain what’s left of her husband, expressing her shame at how that makes her feel. Steve’s father appears unable to cope with the situation, although he tries to help in his own misguided ways. At one point he takes Steve to church to participate in a faith healing. The resulting images are almost sickening.

Gleason is an incredible film, just as full of humour as it is hardship. But even more than that, it is a potent statement about the will to live. Throughout the film, we watch Steve shrink and fade as he is slowly robbed of the freedoms as small and precious as unassisted breathing. But he continues to survive in spite of his failing body. Steve is going to die eventually, and he knows this, but in the end, death is inevitable; life, however, is a choice, and as long as that choice is still in his hands, he remains a free man.

A portrait of an NFL star with ALS? Could go either way.

Watching the decay of one man’s physical well-being is tough, but it’s livened by humour and genuine soul.

As inspiring as it is devastating.