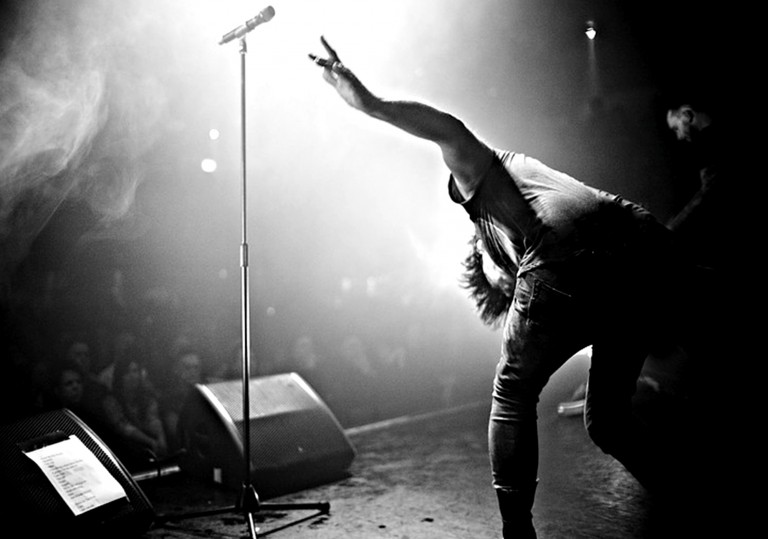 An intimate look at one of the UK’s more overlooked musical pioneers.

A sweet, funny portrait of a man doing what he loves.

With so many music documentaries around that focus on great artists with a tendency towards egomania, it’s refreshing to find one that’s about a musician – and a highly influential one at that – who seems entirely uninterested in self-mythologising. Android in La La Land profiles electro pop pioneer Gary Numan, who was derided and revered in the press in equal measure as he went about selling millions of albums in the late 1970s and early ’80s, before it all came crashing down.

While we do get a standard talking heads setup for the early career portrait part, much of the film is built around a real-time look at the production and life changes surrounding Numan’s 2013 album ‘Splinter’, which would go on to be his best-selling and best-reviewed album in decades. Among the upheavals is the moving of his family, including three young daughters, from Britain to America, with Numan seeing a foray into the world of Hollywood film scores (à la Trent Reznor) as a logical career progression.

The focus on the album’s production allows for poignancy that comes from observing how therapeutic its creation becomes for Numan. The film’s emotional centre, though, is the dynamic between Gary and his wife, Gemma. As a former super-fan, she states that her teenage ambition was simply to marry her idol. Despite that potentially inauspicious start to a relationship, her presence in his life has provided stability, and Steve Read and Rob Alexander’s documentary thrives on their on-screen banter, which often involves bizarre conversations or minor spats that blend sweet and sardonic tones. With a lot of endearing humour coming from their children, too, the film inadvertently makes the case for Numan and family to star in a less obnoxious spin on the formula of The Osbournes.

Yet although the directors provide plenty of fascinating material regarding Numan’s personal turmoil – his depression and diagnosis with Asperger’s Syndrome – during the period between his early career highs and latter-day comeback, putting the music itself on the backburner results in a lack of clarity over the progression in style from his early ‘android’ persona in the early ’80s to now, where his mode is more in the vein of various acts he’s inspired and since collaborated with, like Nine Inch Nails.

For a film that doesn’t start off as seeming like a hardcore fans only affair, the scant insight into nearly two decades worth of the man’s creative output seems a curious treatment of the casual listener or outright Numan novice.

An intimate look at one of the UK’s more overlooked musical pioneers.

A sweet, funny portrait of a man doing what he loves.