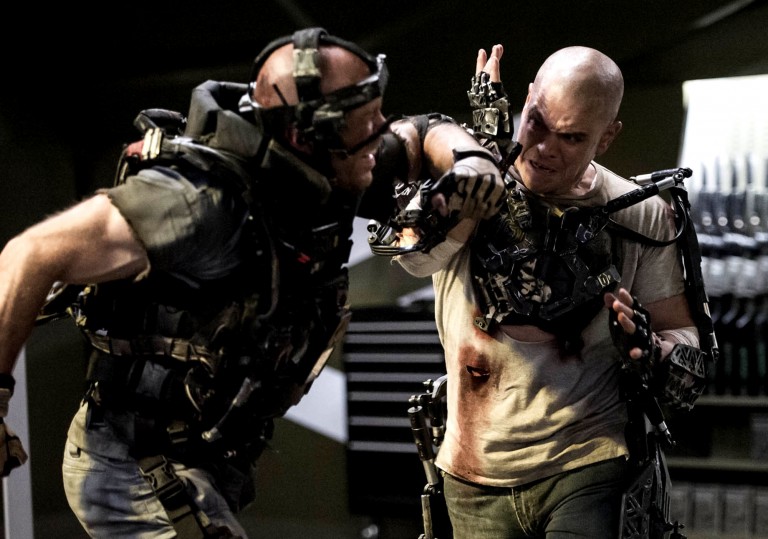 The money’s all there. Grimy battle–tech, stylish action and gorgeously convincing dirty/beautiful effects. But the ideas and emotions don’t quite level up.

A confident sidestep from District 9 rather than an ambitious leap forward, Elysium confirms Blomkamp as an expert genre director. Question is now: can he become more?

Feedback loops from District 9 are everywhere in Elysium. And that, for the most part, is a good thing. Arriving in the same year as Avatar’s big-tech 3D saga and made for roughly James Cameron’s lunch budget, first-time South African director Neill Blomkamp’s Molotov prawn cocktail made one hell of a bang: an inventive sci-fi thriller that seamlessly fused alien allegory, poignant human tragedy and spectacularly convincing visual-effects.

Brains, heart and badass technology are all operational in Elysium, with Blomkamp upgrading Johannesburg 2010 to Los Angeles 2154. D9’s slum-dog urban wasteland has spread like a virus: disease, famine and overpopulation have transformed our planet into a global ghetto.

Blomkamp’s second film is another inverted invasion story, but this time it’s the humans who want to escape from Earth. Gleaming in orbit like a beautiful marble, a pristine Stanford Torus space station called Elysium is now a sanctuary for the rich and a distant dream for the poor.

In their lush circular world of swimming pools and mansions, citizens of Elysium never get sick and never age, while the amoral Secretary Delacourt (Jodie Foster) protects this perfect kingdom from Earth’s great unwashed.

Riffing off an upstairs-downstairs metaphor that’s older than the genre itself, Elysium reveals Blomkamp’s commitment to themes he tinkered with in District 9. Emotionally and physically, though, this is a far more straight-forward sci-fi thriller than his debut — largely because our hero’s selfish-to-saviour arc isn’t half as wrenching as that of D9’s unforgettable man-prawn hybrid, Wikus.

Tough and tattooed, Max De Costa (Matt Damon) follows a soft retrace of Wikus’ journey: by the time we meet him, his life as a legendary street criminal is behind him and he’s now just a downtrodden honest joe, working in a factory to help build the robots that society uses to subjugate its people.

But when an accident sets his body into terminal shutdown, the despairing De Costa is forced to drill on a military-grade exoskeleton (“When we’re done, you’re gonna be a favela ninja”) and pull One Last Job to buy himself a shuttle ride to Elysium, where magical med-beds can cure any illness.

Dragging us with him into a moral maze that shifted and mutated as compulsively as his body, District 9’s Wikus zig-zagged in our sympathies — winning them, tossing them away and then winning them back — to evolve from a bigoted clown into a tragic hero. And just as Wikus’ battle for personal survival transformed into something bigger than himself, Damon goes to Elysium not for humanity’s sake but for his own. But De Costa is a much straighter hero: aggressive and desperate but never cowardly or truly conflicted.

Interestingly, Blomkamp’s initial script treatment had De Costa commit a Wikus-like act that would have changed things spectacularly. But it jarred so badly that he cut it. Perhaps because of Damon’s good-guy persona? Perhaps because De Costa isn’t quite wired with enough complex human circuitry? Who knows?

Nothing, though, is lacking from Sharlto Copley’s Kruger, a sadistic ex-Special Forces mercenary dispatched by Foster to shutdown De Costa. If he’s initially unrecognisable behind a hobo beard and a filthy cloak, Copley’s Afrikaans accent and instant charisma quickly mark him as Elysium’s ace card.

Still, you can’t helping wondering what effect it had replacing Peter Jackson with Simon Kinberg, producer of dumb-fun actioners like Jumper, This Means War and Abraham Lincoln: Vampire Hunter. Too often, Elysium’s social satire and emotion seems more bolted on than organically implanted.

Starting with the obvious metaphor of Damon’s painful corporeal chassis, the conflict between man and machine is what shivers most strongly through Blomkamp’s film. De Costa cracks a joke, a robot sentinel cracks his arm. Similar humour malfunctions occur with his droid parole officer, seemingly borrowed from Total Recall’s JohnnyCab: “Would you like to talk to a human?”

Indeed. As real-world science creeps closer and closer to the fiction imagined by futurists, Blomkamp’s vision of 150 years from now is also fascinatingly plausible and superbly realised. Data heists take place with brain–syncing via grubby USB cables. Elysium’s robots are built for pure realism, every bit as convincing as D9’s extraterrestrials. And that space station itself is both a shimmering technical marvel from a distance and a tactile triumph up close.

Leaving no doubt that there’s a human behind the lens, Blomkamp’s familiar faux–vérité style has a dirty/beautiful sensory kick to it — whether it’s De Costa puking in a dirty shack or falling cherry blossoms sticking to combatants’ wet skin during their brutal final fight. It’s in keeping with Blomkamp’s commitment to physical realism that 22nd–century merc Kruger’s favourite armaments are a (Samurai) sword and (energy) shield.

Having been sentenced to death by a machine, Damon must become a machine in order to reach another machine that will save his life. In Blomkamp’s epic sci–fi vision, it’s about how much you’re prepared to lose in order to win.

The money’s all there. Grimy battle–tech, stylish action and gorgeously convincing dirty/beautiful effects. But the ideas and emotions don’t quite level up.

A confident sidestep from District 9 rather than an ambitious leap forward, Elysium confirms Blomkamp as an expert genre director. Question is now: can he become more? 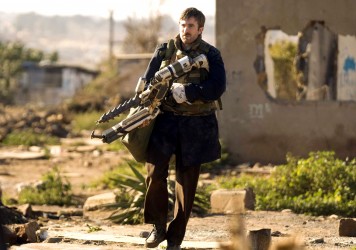