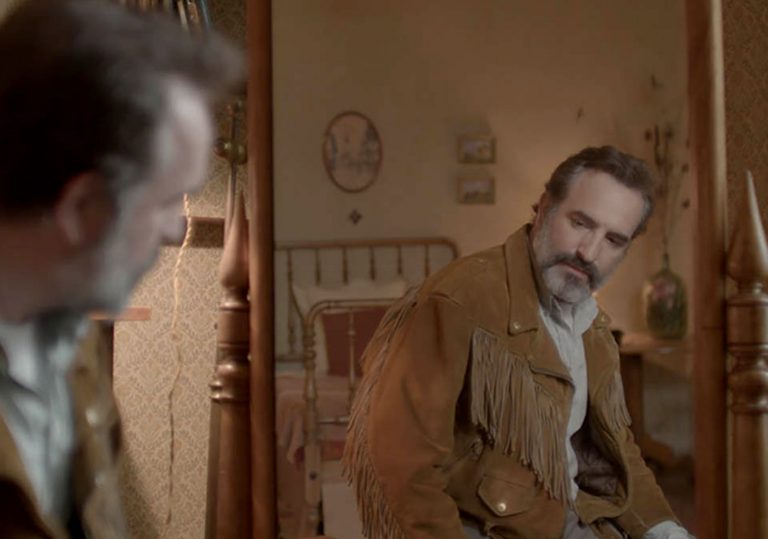 Could this be the time that eccentric French director Quentin Dupieux strikes gold?

Everyone looks like they’re having fun, which is more than can be said for me.

Prolific French genre filmmaker Quentin Dupieux is one of cinema’s quintessential ‘almost-but-not-quite’ talents. On paper, his films always sound lip-smacking: A killer tyre is on the loose!; A retro cop comedy!; A filmmaker has 48 hours to find a realistic groaning sound to secure funding for his movie!

Yet they rarely manage to transcend their logline. Deerskin is no different, a deadpan parable about extreme emotional detachment in which narcissistic and comically deranged drifter Georges (Jean Dujardin) falls under the spell of a tassled tan jacket and descends on to a murder spree so he can claim to be the owner of the world’s best jacket.

A local barmaid with po-faced filmmaking aspirations (Adèle Haenel) unknowingly assists with Georges’ criminal endeavours by editing amateur DV documentary footage of his crimes. Tonally, the film is a mess, as you don’t have the thrills of a slasher movie or the laughs of an all-out comedy.

The cast are clearly committed to Dupieux’s vision, but that vision seems to involve lots of groan-worthy plot twists that always come across as thin material being hammered out further, and never like the satisfying development of a credible idea.

Sure, there’s a few grotesque laffs to be had along the way, but when this 77-minute, purpose- free film ends, it leaves no lasting impression whatsoever.

Could this be the time that eccentric French director Quentin Dupieux strikes gold?

Everyone looks like they’re having fun, which is more than can be said for me.