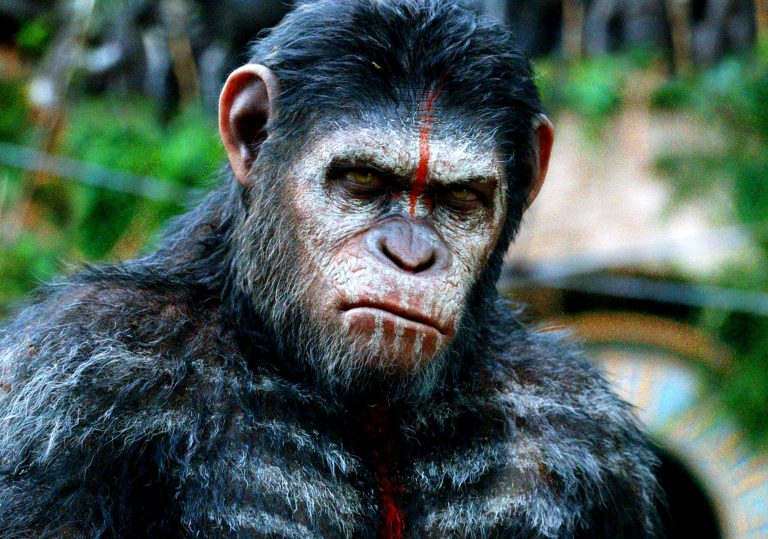 Rise was an engaging surprise.

Pretty sure we’ve seen this before... Oh, we have. Just not with monkeys.

Has its moments, but is no Dunston Checks In.

It was with some trepidation that monkey lovers faced the last Planet of the Apes reboot — 2011’s Rise of the Planet of the Apes. Their hairy little hands had been burned by Tim Burton’s star-studded stumbler, and the idea of more hunched actoring, portentous “relevance” and chat show-stalking thespians talking about how long they spent in make-up was distinctly unappealing.

In fact, Rise turned out to be pretty good, partly due to the presence of James “James Franco” Franco, but mostly because it owed much to both the 1972 mini-budget Conquest of the Planet of the Apes and James Marsh’s monkey anthropomorphism doc, Project Nim. It was a film that worked as a tear-jerker relationship drama, eco-fable, thriller and prison movie at once. A major character, Caesar, also just happened to be a super-smart chimp.

That’s not an easy trick to pull off twice, and Dawn, alas, doesn’t come close. The film is set after a plague of ‘simian flu’ has wiped out most humans, leaving Caesar and his band of fast-evolving monkey pioneers to build a new world. As with any growing empire (surely the titular prefix of the next Apes outing?), factionalism and rumour beset the leader, again played by Andy Serkis, this time with regal anguish in the face of Shakespearian plotting and philosophical awakening. When a band of human survivors wander into his kingdom, the stage is set for a noble savage/settler face-off that tries, and mostly fails, to make muddy points about the universality of friendship and the unstoppable force of violence once unleashed.

To be fair, Dawn has picked a losing game, but it’s one that most Planet of the Apes movies have in common with post-apocalypse films: how to recreate the initial thrill that comes from juxtaposing the familiar with the wildly improbable. The apocalypse fantasist is addicted to a drug with horribly diminishing returns. Planet of the Apes itself hit the spot several times, from gorillas on horseback to the famous final shot reveal, but even that film had nowhere to go in its sequels.

There was a nuclear bomb, a school bus, a chimp in a spacesuit — all attempts to clash the mundane with the outlandish, but never achieving the impact of that brilliant first time. Dawn similarly works best in the moments that jar — Caesar on horseback rides past a petrol station in a forest glade, an ape perches over the Stars and Stripes as humans are corralled at gunpoint. But these instances are few.

The momentary thrill of seeing our own civilisation reduced to rust and dust is leavened by anonymous direction and a plot that, aside from the because-we-can CGI set-pieces, recalls the long (and probably best) forgotten TV spin-off of the original film series. As the human lead, Jason Clarke has neither the dramatic chops nor the lines to stand up to all the monkeying around, and his relationships with his bland paramour and forgettably sensitive son are left — maybe thankfully — unexplored.

His absence makes for a curiously lopsided creation in which Serkis’ Caesar is the beastly, charismatic side of a cross-species double act where the other guy fails to show up. With such a single overpowering character, the narrative is railroaded into just the kind of finale you’d expect from what inevitably becomes a just another superhero movie: a big, long fight on a construction site. Only this time, with monkeys.

Dawn of the Planet of the Apes isn’t a bad film, but it is disappointing and dispiriting. It’s a long, downward spiral from a peak of mild diversion to the entropic climax: a mishmash of spectacular unsurprise, Epic 101 tick-boxes and all watermarked ‘Franchise’. Let’s hope the inevitable third part doesn’t turn out to be such a planet-sized banana skin.

Rise was an engaging surprise.

Pretty sure we’ve seen this before... Oh, we have. Just not with monkeys.

Has its moments, but is no Dunston Checks In. 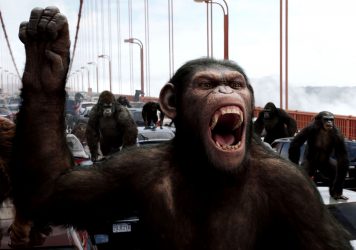