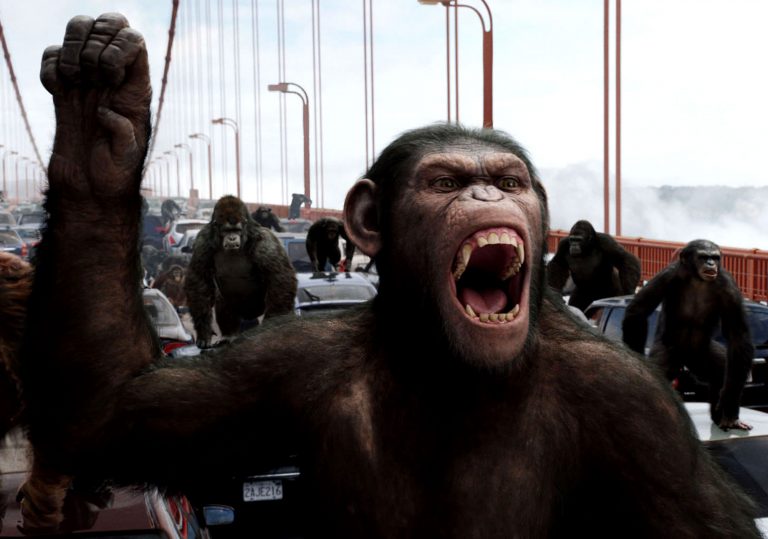 A former Hollyoaks director steps up to reboot a franchise killed off by Tim Burton 10 years ago.

As we approach the end of a summer which has seen Transformers: Dark of the Moon and Pirates of the Caribbean: On Stranger Tides become two of the highest-grossing films of all time, Rise of the Planet of the Apes comes as welcome relief.

In sharp contrast to those interminable cash cows, sophomoric British director Rupert Wyatt has delivered a prime slab of blockbuster entertainment that tells a coherent story, judiciously utilises cutting-edge technology to dazzling effect, and clocks in at well under two hours.

Wisely distancing itself from Tim Burton’s ill-fated remake of the 1968 original, Rise opts for a series reboot, taking cues from 1972’s Conquest of the Planet of the Apes to set the stage for the first simian uprising. James Franco stars as pioneering geneticist Will Rodman, who discovers a potential cure for Alzheimer’s – a project rendered personal and urgent by his own father’s battle with the disease.

Taking the baby of a chimpanzee test case into his care, Rodman forms a close bond with his subject before discovering that his wonder drug has unwelcome side-effects. For while Caesar (played by Andy Serkis) has been gifted with extraordinary intelligence, he’s also prone to bouts of uncontrollable rage.

Although there’s an awful lot of fun to be had here, it’s worth noting that the film has some fairly significant flaws. Establishing scenes between Franco and love interest Freida Pinto are ludicrously truncated, and the pair make for a bland, unconvincing screen couple. Meanwhile the villains of the piece – David Oyelowo’s pharmaceutical mogul and Tom Felton’s sadistic ape-handler – turn in hammy, one-note performances that swiftly grow tedious.

But any shortcomings fade into insignificance whenever the primates swing into view. Performance capture technology has come a hell of a long way since Robert Zemeckis’ dead-eyed Tom Hanks creepfest The Polar Express, and the work on display here by visual effects house WETA is quite remarkable. Caesar and his tribe interact seamlessly with the real world, to the extent that it’s genuinely easy to forget about their digital origins.

Building to a Golden Gate Bridge-set finale which is spectacular but admirably restrained, Rise pulls off the simple trick of leaving you wanting more. Let’s hope the box office numbers are sufficient to give Bay and Bruckheimer pause for thought before the inevitable Transformers 4 and Pirates 5.

A former Hollyoaks director steps up to reboot a franchise killed off by Tim Burton 10 years ago.