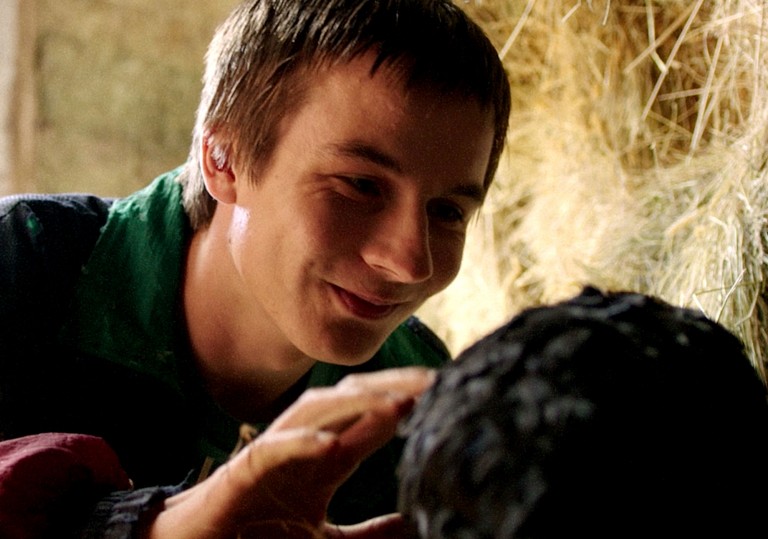 A boy and his chicken. Sounds like the making of a Sunday afternoon TV drama.

A raw, hard-hitting and beautiful depiction of a troubled relationship.

A grand mixture of dark and light, that’s not afraid to discuss tough topics in a refreshing way.

Nature versus nurture is the name of the game in Joe Stephenson’s directorial debut, Chicken. Despite its idyllic, Essex countryside settings, the film’s characters are tethered to a machine hell bent on destruction, one that forever dredges up the putrid funk that abuse leaves behind. Stephenson eschews convention when presenting the constraints of living with learning difficulties, attempting to make a new and fresh statement.

As the instantly loveable Richard, a boy who does not let his tumultuous past – or his present – hold him back, Scott Chambers delivers an inspired performance. He stuck with his tormented and abusive older brother, Polly (the brilliant Morgan Watson). Richard’s careful, though meagre meal preparations in their squalid caravan are heartbreaking and the sole example of the love and tenderness you’d expect to see within a normal family.

Annabell (Yasmin Paige) bulldozes in with her fast-talking, city-girl slickness and fiery teenage ’tude, and Richard starts to emerge from his shell. The chemistry between the pair is palpable – he spurs her on to reconnect with her dormant imagination. Language is loaded, and terms such as ‘freak’ and ‘chicken’ are critiqued for their dark double-meanings. Paige, best known for her troubled seductress in Richard Ayoade’s Submarine, brings frazzled teenage angst to the screen with great skill. However, in Chicken, she quickly grows into a more finely-shaded presence, adopting a maternal role and eventually displacing Richard’s pet chicken Fiona (who, incidentally, is lovely).

Stephenson uses nature (and the conflicts within nature) as a metaphor for the complexity of human relationships. It’s the stand out aspect of the film. When it reaches its cathartic peak – one of tragic Greek proportions – the symbol of the wild animal and its need for freedom shines through. For all of its tormented violence and hard-to-swallow subtext, Chicken is a film that shouldn’t be passed by.

Chicken plus a bundle of exclusive behind-the-scenes extras is available now on We Are Colony.

A boy and his chicken. Sounds like the making of a Sunday afternoon TV drama.

A raw, hard-hitting and beautiful depiction of a troubled relationship.

A grand mixture of dark and light, that’s not afraid to discuss tough topics in a refreshing way.