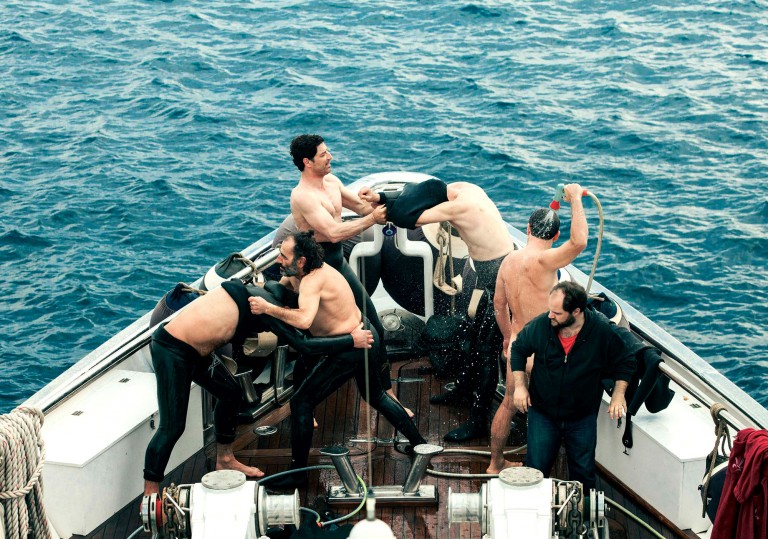 Athina Rachel Tsangari has made some great short films since Attenberg.

Dick measuring on the high seas is the order of play in the latest film by Greek director Athena Rachel Tsangari, an abrasive satire on the inherent idiocy of machismo. Six associates, brought together aboard a luxury yacht by a well-heeled doctor, push off for the Aegean sea and a sojourn of manly pursuits. But what’s the point of being good at something if you’re not better than a social equal? Personal worth is relative not to achievement, but to conquering the achievements of others. Only then you can claim the prize of being able to advise your peers of their inferiority.

It’s not long before the men cotton on to this notion, and feel the need for formalise it, for prosperity. A system is devised whereby each man has their achievements tallied and indexed, with the ultimate aim of having a single victor at the end of the trip. Or, to acknowledge its official title: “the best in general.”

Chevalier sits very neatly in a small clutch of films that have been termed the Greek New Wave, characterised by its mordant humour, an ambivalent attitude to realism, and a feeling of suppressed violence which could explode at any moment. These men have no empathy for one another, each is driven by self interest and a desire to assert his superiority over the others. Yet this Dadaist championship rejects the old fashioned sportsmanship in favour of looking at these men really think about their accomplishments. It’s almost as if Tsangari has stripped back the guard-shield of politesse and civility in order for her camera to catch an unvarnished, primate reality that exists just under the surface.

It’s a fascinating set-up and executed with cool precision, even if it never really shifts into a second gear. The central characters share many traits, and their essential similarity emphasises the absurdity of their competition. What does being the best out of these six slightly unhinged men actually mean? It’s questionable whether Tsangari envisions a life for these men outside the timeline of the film. We certainly don’t care what happens to them, or where they’ve come from to reach this point. While that makes it a tougher film to really get an emotional hold on, it helps it to be more resonant as a statement on life as an unnecessary and illogical tournament. Sometimes the quiet discussions between the games reveal far more humane traits than do the moments where we’re able to prove we can build IKEA furniture faster than someone else.

Athina Rachel Tsangari has made some great short films since Attenberg.