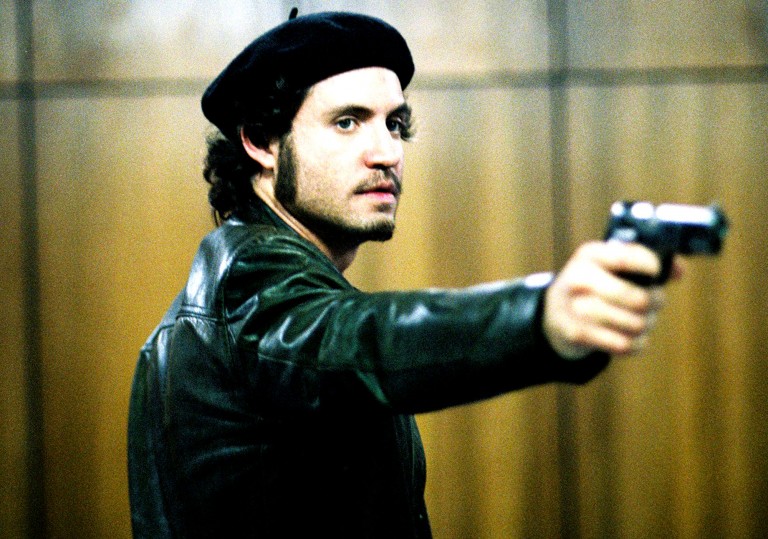 Granted the honour of closing the 2010 Cannes Film Festival. They don’t give that away for peanuts.

An imaginative but exhausting study of a man who embodied the shifting sands of history.

Illuminating rather than compelling. Perhaps the five-and-a-half-hour DVD release will reveal exactly what is missing.

Olivier Assayas serves up an imaginative but exhausting study of a man who embodied the shifting sands of history.

The history of left-wing radicalism is being written by the vanquished. It’s the story of a defeated generation pieced together from prison cells and safe houses. It’s a fractured narrative of violence and politics, resistance and revolution. It’s compelling, seductive and dangerous. In truth, it’s many different stories entangled in a complex web of agendas and ideologies. But at the centre is the gravitational influence of Ilich Ramírez Sánchez, better known as Carlos the Jackal.

Born into a communist family in Venezuela and named in honour of Lenin, Carlos was an itinerant child. He was educated at the London School of Economics and trained in guerrilla warfare in Cuba. He claimed to have joined the Popular Front for the Liberation of Palestine in 1970, and spent the next quarter of a century engaged in an urban campaign against capitalism, Zionism and American imperialism, turning Europe into a proxy battleground for the Middle East.

Carlos and his associates bombed newspaper offices in Paris and banks in London. They attacked the French embassy in West Berlin and fired rockets at Israeli planes in Orly. But it was a raid on OPEC – the Organisation of the Petroleum Exporting Countries – in Vienna in December 1975 that saw Carlos turn terrorism into political theatre.

Leading a gang of six PFLP militants, he took 60 hostages, commandeered the Austrian television networks and eventually flew to safety in Tripoli. After Vienna, Carlos the Jackal was no longer a terrorist – he was a star.

So it’s telling that Olivier Assayas’ muscular biography should restrict itself to his first name only. This isn’t the story of the mythologized folk hero. This is the story of the man who found himself at the intersection of history, when the future was balanced on the scales of power and possibility.

Assayas is attempting to remain, if not impartial, then self-aware. The film opens with a title card acknowledging that much of Carlos’ life remains a mystery. The director has filled in the gaps with an imaginative account of history, following Carlos on his journey through the radical underground – from Europe to Palestine, Libya, Iraq, Lebanon, South Africa, Jordan, Yemen, Algeria and Sudan.

Here he crosses paths with a bewildering array of political figures and intelligence officers as he gradually evolves from a covert operative to a political embarrassment after the fall of the Berlin Wall and the defeat of global communism.

By necessity rather than design, the story of Carlos is a shotgun history of the Cold War. It’s a monumental undertaking for a filmmaker, one that Assayas originally deemed too big for cinema. This 164-minute theatrical cut is just a taste of the five-and-a-half-hour version that ran on French TV and closed the Cannes Film Festival in May. And although it contains enough detail to fill an exam paper on international relations, the joins do show.

Inter-titles help us keep track of names, dates and places that would otherwise become confusing (and occasionally do anyway). But the repeated tactic of fading to black between scenes creates the impression that Assayas – alongside editors Luc Barnier and Marion Monnier – has simply dumped vast amounts of the film onto a cutting room floor.

What we’re left with is a biopic that provides a notable contrast to other films that revisit the era. Though Carlos can’t help but evince a certain radical chic – all whiskey, cigarettes, leather jackets and sideburns – it avoids the gauche glamorisation of Uli Edel’s The Baader Meinhof Complex, a film that was intoxicated by machine guns and micro skirts.

But if Assayas offers the more serious interrogation of the revolutionary impulse – directly addressing the seductive qualities of the terrorist lifestyle, “to brush against danger but never touch it,” as Carlos puts it – his film also suffers for it. Carlos lacks the energy and charisma that enlivened Jean-François Richet’s Mesrine – a film that skimmed the context to focus ruthlessly on character.

Part of that can be attributed to the fact that there’s simply so much plot to navigate. We join Carlos in his early days in Paris, the committed soldier whose idea of glory lay “in the duty accomplished in silence, for the sole satisfaction of acting in total agreement with our conscience, working for a universal cause.” We see him kill for the first time, murdering two French agents and a Lebanese informant in calm cold blood.

We follow him to the Yemeni training camps of the PFLP and from there across the world and back – through the OPEC spectacle and Saddam’s Iraq to the frightened, faded days shuttling back and forth across an unwelcoming Middle East. But Assayas can’t help but assemble the film with a mechanistic quality – at times it feels more like a lecture than a living, breathing piece of cinema.

An over-stuffed narrative is the inevitable by product of the film’s resizing from small screen to large. More problematic is the issue of Venezuelan actor Édgar Ramírez in the pivotal role of Carlos himself. Despite his impressive physicality – gaining and losing weight dramatically to embody Carlos’ narcissism and the uneasy entangling of sex and violence that defined him as a character – Ramírez simply isn’t magnetic enough to drag you with him through the long stretches where introspection and exposition take the place of action. For all his commitment, Ramírez is no Vincent Cassel.

And yet there’s an awful lot to admire about Carlos. At its best, it possesses a clarity and intensity that lend the film an unsentimental edge. The OPEC raid in particular reveals both the cynicism and the brutality that underpinned so much of the radical left’s rhetoric about freedom and justice. These were local vendettas played out on a global scale, with a callous disregard for the value of human life. And yet there’s something about the era that seems almost quaint in hindsight. “I’m a soldier, not a martyr,” says Carlos in a rebuke to his PFLP handlers that has an ominous resonance.

In the end, Carlos became a relic of history. He had been a tool, tolerated for his usefulness but blinded by vanity. As reflected in Ramírez’s tired eyes, his fate could almost be tragic but for the destruction he left behind and the destruction he might have caused had he been free to see the resurgence of Islamic terrorism.

Assayas has created a biopic that neither flatters nor deceives. What it lacks in passion it makes up in ambition, but the very scale of the task is prohibitive. Despite the abundance of historical detail, there is the nagging sense that something is missing; some small moment amidst these great events that might have unlocked the interior life of a complex and mysterious man. As it is, both Ilich Ramírez Sánchez and the Jackal remain an enigma.

Granted the honour of closing the 2010 Cannes Film Festival. They don’t give that away for peanuts.

An imaginative but exhausting study of a man who embodied the shifting sands of history.

Illuminating rather than compelling. Perhaps the five-and-a-half-hour DVD release will reveal exactly what is missing.