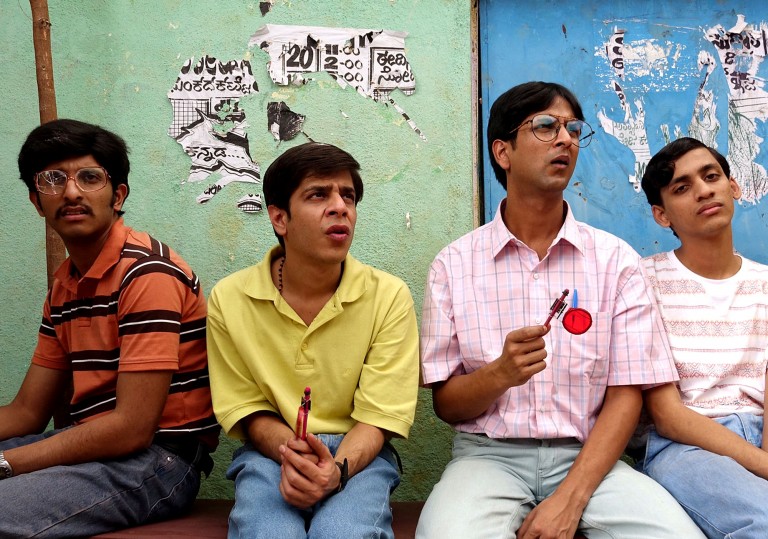 Another comedy about college kids trying to lose their virginity...

Visually stunning with a script that fluctuates between cringe-worthy and comical.

Broad appeal, though most likely to the demographic that it ridicules.

A teen sex comedy set in ’80s Bangalore drops to Netflix and it's… pretty okay.

We all remember those awkward teenage years. That blurry haze of adolescent experiences – sometimes exceptionally hard to endure, others better left forgotten, but on a whole, compensated by formative events that evoke amusement and enjoyment. The same could be said of Indian director Q’s Brahman Naman. Set in Bangalore in the ’80s, the film follows a trio of sharp-witted, sexually-frustrated Indian teenage boys, whose primary interests concern excessive drinking, competing in college quiz challenges and trying desperately (rather, failing miserably) to lose their virginities.

“Oddly likeable” is the term allocated to focal protagonist, Naman (Shashank Arora), an oddly agreeable description for a teenager who spends a proportionate amount of his time conjuring new (and admittedly resourceful) ways to relieve his alarmingly unrelenting sense of sexual frustration. Whether it’s dry humping the fridge or using a rotating ceiling fan and rope to aid his masturbation, Q certainly succeeds in creating an ongoing battle for viewers with regards to deciding if Naman emits any endearing qualities at all, or is in fact just excruciatingly uncomfortable to watch. Upon watching, it would be safe to assume that most viewers will gravitate towards the latter.

Often shot at obscurely low angles, Braham Naman not only spectates these teenagers as they ogle at virtually every girl who crosses their path, but also infers the boys’ wandering eyes. Camera angles from the leg up and the neck down reinforce this prevailing theme of infatuation. It’s almost predictable, then, that the film enters objectification territory, as Naman physically uses a scarf to cover the face of the girl he is about to have sex with. Needless to say – and much to the entertainment of viewers – he is as unsuccessful in his endeavors here as he is throughout the film’s entirety. Looks like it’s back to the fridge for Naman.

Another comedy about college kids trying to lose their virginity...

Visually stunning with a script that fluctuates between cringe-worthy and comical.

Broad appeal, though most likely to the demographic that it ridicules.