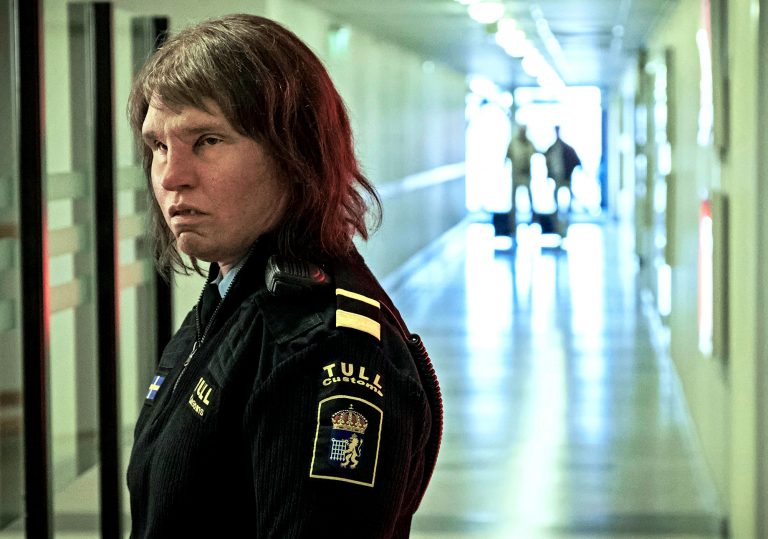 Well. Wait a minute. What the?

It is clear from the outset that Border will be trafficking in the divisions of identity and alterity. This Swedish-Danish co-production from an Iranian director (Ali Abbasi, whose 2016 feature debut was the Danish horror Shelley) is adapted from a short story by Swedish author John Avjide Lindqvist (who penned the 2004 novel ‘Let The Right One In’ and then adapted it for Tomas Alfredson’s 2008 film version).

It chooses to focus on the sort of character whom one might only ever notice in passing, if at all, but who embodies many of the conflicts and contradictions of our globalised, multicultural lives.

“Ugly bitch!” says a teenaged boy. “I can’t stand that kind.” He is referring to Tina (Eva Melander), the border guard at a Swedish ferry port who has just had the boy’s alcohol seized. Stockily built and frumpily dressed, with sunken eyes, bad teeth and a strange scar on her face, Tina somehow manages both to stand out from everyone else and shrink into the background.

At work, she has an uncanny ability to sniff out from the passing crowd those who are transgressing the limits of the law, be they juvenile liquor smugglers or importers of child pornography. She shares her home in the forest with a feckless dog trainer named Roland (Jörgen Thorsson), in a platonic relationship of convenience. But she is lonely, and feels closer to her natural surroundings than to her human colleagues and companions.

All this changes when Vore (Eero Milonoff) crosses her border post. He is a peculiar man whose crooked smile suggests secret knowledge, and whose scent throws Tina’s usually unerring senses into heady confusion. What ensues is a love story, as Vore brings to Tina an understanding and acceptance that few others – perhaps only Tina’s senescent father (Sten Ljunggren) – have ever shown.

Vore seems like a perfect match for Tina and is, despite her inexperience and some physical anomalies, sexually compatible with her too. But even as Tina starts taking a new-found pride in aspects of herself she had always suppressed, she must decide how much of her older, unhappier identity she is willing to abandon.

The fairy tale aspects of this burgeoning sylvan romance are offset by Tina’s involvement in a local police investigation into the most appalling kind of real-life crime. Meanwhile, Abbasi keeps switching the boundaries of genre, even as he explores the fluid borders between nations, ethnicities, genders, physiologies and even species. As with any folkloric allegory, the film is fanciful, yet at the same time it articulates recognisable issues facing anyone who has ever been marginalised, overlooked, alienated or oppressed.

In searching for her own true roots and individuality, Tina may just be chasing her own tail, but the dilemmas raised by this transgressive quest will likely resonate with the divided loyalties of anyone who is, for example, mixed race, adopted, gender dysphoric or one of the Stolen Generations, and who therefore slips through the fixed barriers of conventional identity. And if all that makes the film sound a little heavy, rest assured that Abbasi smuggles in lots and lots of freaky goodness.

Well. Wait a minute. What the?