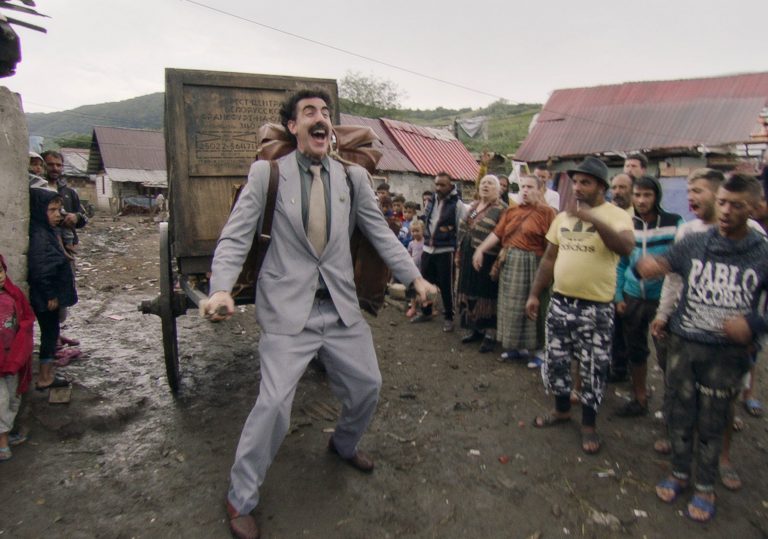 The first film was “very nice,” before it was quoted to death.

Despite some stalled scenes, the funniest pound-for-pound comedy in recent memory.

Borat’s journey to wokeness is a fraught one. Jagshemash!

Like Hemingway before him, Borat Sagdiyev has returned to America to find a nation changed. Sacha Baron Cohen saw fit to revive his most inspired comic creation, the calamity-prone Kazakh reporter with a taste for revealing swimwear and convivial anti-Semitism, to plunge him into a United States beset by Trumpites, resurgent Nazi activity, and soon after the start of shooting, a viral pandemic.

Recent years have yielded no shortage of grist for his satirical mill, even as the character’s popularity has made getting the drop on unsuspecting marks somewhat more tricky. You’d think everyone would have learned their lesson back in 2006, but as we see and have seen, quite the opposite is true; Americans have never been prouder to espouse their grotesque views on camera.

This is to say that the mechanism of humour that powers the Borat routine – coax out a subject’s most perverse views via the earnest cluelessness of a foreigner – still works like a charm. But it’s applied more purposefully and selectively this time around, with a partisan political bent absent from the original feature’s free-for-all offending.

A final title card urges viewers to vote, preceded by a visual gag vaunting the heroism of Dr Fauci, two gestures toward activism totally out of joint with the previous film’s all-irony ethic. That flash of straightforward earnest intent clashes awkwardly with the defiant refusal to take anything else seriously.

In the previous decade, Borat could get his yuks by asking a panel of feminists why they couldn’t land husbands; now, his arc mostly concerns acceptance of his daughter’s agency as a woman. This occasions some sluggish footage, in which young Tutar (Maria Bakalova, giving one of the most fearless performances in screen comedy history) learns her worth from her kind, patient babysitter while her dad’s away earning $72 for breast augmentation surgery.

Borat embarks upon a cross-country journey to deliver a bribe to Mike Pence in the form of a famed monkey, with mission drift first setting in when he opens the transport crate to find wilful Tutar and a simian skeleton. (He ate himself, she insists.) He then resolves to deliver the fifteen-year-old as a child bride to Pence, and after getting thrown out of the Conservative Political Action Convention, to next best thing Rudy Giuliani.

The former Mayor, by the way, does come off more as a leathery, lecherous thing than a man, in a segment teetering on the precipice of the legally actionable. Far and away the film’s most shocking footage, it’s a reminder of the unique power Borat has to penetrate the real in a way that cartoonists, TV personalities, tweeters and other political commentators cannot.

They can speculate and research while he goes out and shows how troublingly easy getting hard proof of moral deformity really is. A pastor posing as a doctor at a sham abortion clinic turns a blind eye to incest in his effort to preserve the foetus; a plastic surgeon tells Tutar he’d have sex with her if her father wasn’t sitting there in the room with them; a debutante’s dad estimates the monetary value of a good woman at $500.

Any fears that everyday life in a topsy-turvy US would render Borat redundant have been misplaced, mercifully. His hit-to-miss ratio may not be what it used to be, as shown in the draggy montage during which he annoys the hell out of his conspiracy-mongering quarantine mates. But even if nothing hits the high of his full-frontal fight with Azamat (what could?), Borat has exceeded expectations at a time when good comedies have never been sparser or more precious. For that, all we can say is “Chenqui!”

The first film was “very nice,” before it was quoted to death.

Despite some stalled scenes, the funniest pound-for-pound comedy in recent memory.

Borat’s journey to wokeness is a fraught one. Jagshemash! 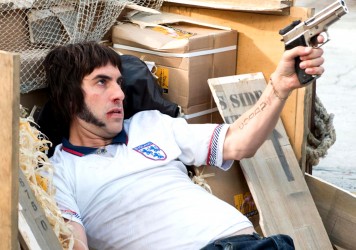