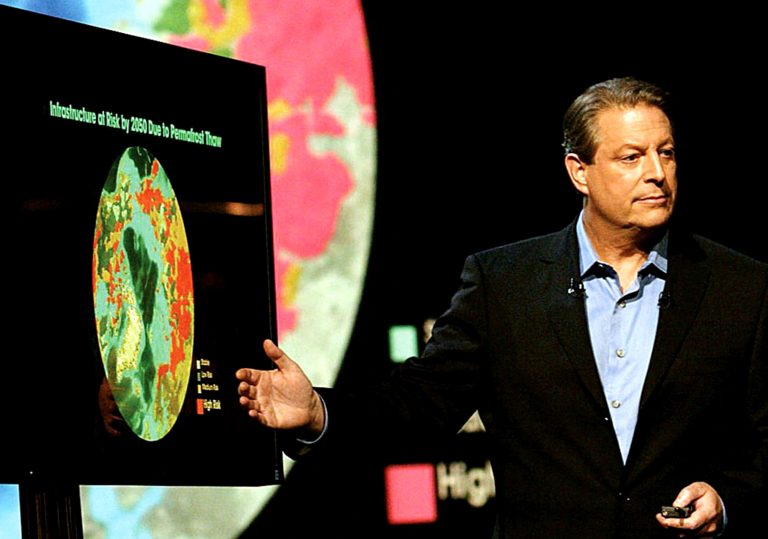 A film from Al Gore, the boring dude who let cowboy George and his cabal of trigger-happy neo-cons take over the White House? You gotta be kidding.

You mean America alone is responsible for almost a quarter of all the carbon dioxide emissions that are killing the world? Tell us more!

Seriously, we gotta move to a perma-culture farm on the west coat of Ireland that’s run like a Kibbutz and powered by wind or something. Like, now.

This vital eco-doc from Al Gore contains a chilling wake-up call everyone needs to listen to.

What do you get when you put morose-sounding former Vice President of the United States Al Gore in a room, blabbering on and on about gas-guzzling cars and the science of climate change? Boring, boring and more boring, right? Wrong! This feature-length documentary is gripping stuff – you’ll put down your keys and never drive an automobile ever again.

Here’s why. Gore, perennial next President of the United States (he had it snatched from him after a dubious Supreme Court decision in 2000, remember?) will tell you – through a highly engaging hour-and-a-half multimedia presentation – that you had better cut back on your CO2 emissions, like, now, or else we’re all doomed to a life of endless droughts, freak hurricanes and oven-hot summers that will kill more fat people across England than a permanent diet of pies and chips could ever do.

As for polar bears, the fluffy white creatures will be all but gone, drowned in a world where icebergs have melted away like Cornettos in the sun.

Pretty tragic, right? That’s precisely why Gore, following his 2000 loss to Dubya, re-set the course of his life to focus on an all-out effort to spread the word about global warming.

An Inconvenient Truth follows Gore’s lecture tour around the world, stopping every once in a while to show clips of key events that have triggered this Quixotic mission. These are: a car accident that nearly killed his young son; the death of his sister from lung cancer (his parents were tobacco farmers); and the aforementioned defeat in the presidential elections against baby Bush. The film’s personal dimension is important, as it makes you care about Gore and listen carefully to what he has to say.

How about weaknesses? There are a few. You can’t help but notice the glaring irony that is Gore riding in posh cars and flying in airplanes en route to his speeches. Plus, he never questions the systemic imperative that has been a major cause of global warming in the first place, i.e. the pursuit of profit above everything else. The notion that we operate within an economic system that relies on permanent growth is never discussed.

The fact that corporations have a legal commitment to maximise dividends is all but ignored. But then again, would you expect such radical deviations from a mainstream politician who’s also a businessman and sits on the board of directors of Apple?

In the end, whatever you think of Gore, the message is abundantly clear: the world’s being fucked and it’s up to us to clean up our act. An Inconvenient Truth should be mandatory viewing for all who care about the survival of the species. Go see it now.

A film from Al Gore, the boring dude who let cowboy George and his cabal of trigger-happy neo-cons take over the White House? You gotta be kidding.

You mean America alone is responsible for almost a quarter of all the carbon dioxide emissions that are killing the world? Tell us more!

Seriously, we gotta move to a perma-culture farm on the west coat of Ireland that’s run like a Kibbutz and powered by wind or something. Like, now.