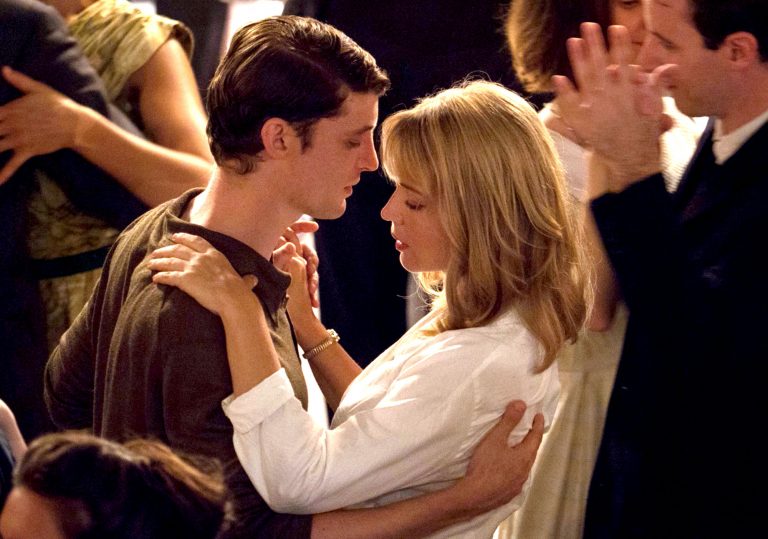 All the right people have been hyping this title.

A romantic drama that becomes a social commentary that takes on an impossible scope.

Catherine Corsini’s An Impossible Love, adapted from Christine Angot’s novel, is a Trojan Horse of a movie. On the surface it is a sensual romance: there are sweeping flurries of piano music care of Grégoire Hetzel; idyllic, sun-kissed landscapes are captured by cinematographer Jeanne Lapoirie; and a soft, feminine voiceover is supplied by Jehnny Beth.

Yet the film’s essential framework shows how trauma is passed on from generation to generation – specifically, from mother to daughter – and how the patriarchy enables abuses of power to occur without consequence. Underneath all that is an ironclad monument to female resilience: women endure as experience forces our eyes to open.

Châteauroux (where Angot was born) is the location where working class Rachel (Virginie Efira) lives and meets the bourgeois, worldly Philippe (Niels Schneider). They rapidly embark on a very sexy relationship. “Your skin is like silk,” he says with awe, kissing every inch of her body. “You could have any man.” She smiles like the proverbial cat that got the cream: “It’s you I want to charm.” Rachel’s cousin is soon to be married and she thinks that Philippe will pop the question too.

A swooning, frenzied tone builds the momentum of a classic screen romance. A narration by Rachel and Phillipe’s child lends a sense of inevitability to this affair blossoming into something beautiful. Blissful waves of amour and pleasure-flushed faces propel the narrative, until Philippe, so far a perfect archetype of a Romantic Hero, begins to transgress this mould.

Schneider, all insouciant golden beauty, is often cast as a rascal, so seeing him cast as an earnest lover is a big surprise. He is perfectly awful – or awfully perfect – especially as Philippe’s true colours begin to show. He delivers devastating disappointments as if they are mere common sense. For her part, Efira reacts to blow after blow with surface composure, and then she carries on.

The child narrator, Chantal, is born. Years pass. Sometimes Rachel and Philippe see each other. More often they don’t. Rachel builds a good life. “My mother had no regrets. She had known grand passion and now I was there.” The sweep of the story is novelistic. Yet by subverting the predictable trajectory early on, Corsini (via Angot) maintains a sense of suspense while Efira holds attention with a performance of stoic beauty.

Her thoughtful nature is shown by the way she listens attentively to the people in her life. One motif is the two-way power struggle that takes place between her and Philippe. As Chantal grows up, this power struggle takes on a further dimension.

Then comes a twist that casts the power dynamics between the genders in a more desperate light. As with all the events in An Impossible Love, it unfolds naturalistically, without signposting, and big drama does not follow. However, everything that came before is recalibrated. The stakes retroactively heighten. A romantic drama becomes a biting social commentary. And still the film continues with a new existential ambience conjured by disillusionment, power, survival, what atrophies and what endures.

All the right people have been hyping this title.

A romantic drama that becomes a social commentary that takes on an impossible scope.