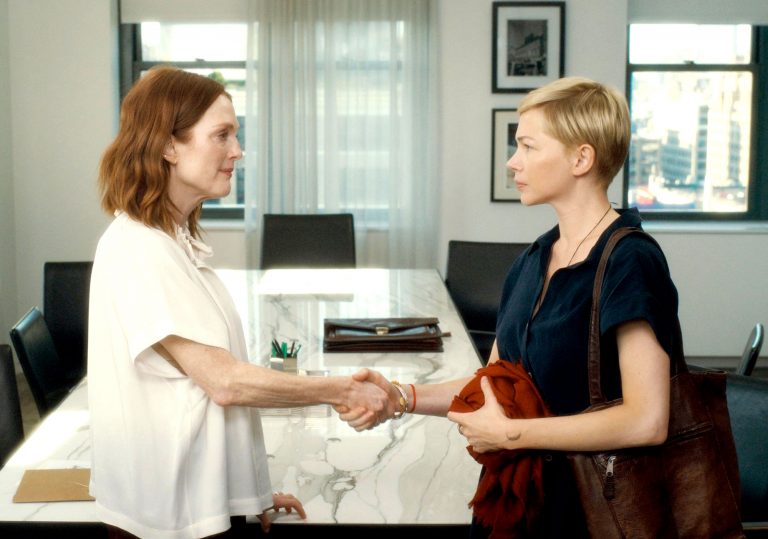 Michelle Williams and Julianne Moore – always worth a punt.

A limp and forgettable narrative gives us little to hold on to.

As it twists its way through much cloying melodrama, Bart Freundlich’s After the Wedding feels more like an above-average episode of Grey’s Anatomy than it does an emotionally coherent feature drama. This elaborate tale of family secrecy and bitter revelation is a gender-swapped remake of Susanne Bier’s 2006 film of the same name. The source material is prime fodder for an engaging tearjerker, but this new film falls flat almost from the word go.

In a hurried opening we get a taster of what life is like in India for Isabel (Michelle Williams), a staff member at an orphanage in desperate need of funding. She is a surrogate mother to the children, taking a shine to one boy in particular who craves her protection. It is his abject loneliness that makes a request from her employer to travel to New York all the more painful, but the money the orphanage relies on is dependent on the trip.

We then switch from India’s warmth to the clinical world of the New York elite and the life of Theresa (Julianne Moore), the millionaire benefactor Isabel must meet to agree the terms of their charitable business. Their first encounter sees Williams and Moore play out a terse but underwhelming face-off, and their subsequent meetings feel just as abrupt and shallow.

The rest of the film takes place, as the title would suggest, after the wedding of Theresa’s daughter, Grace (Abby Quinn), with Isabel in attendance at Theresa’s invitation. The repercussions of this plot point, the family histories that are exposed and relationships that are tested, are best left unsaid, but from here the narrative feels as rushed and underdeveloped as all the slightly inane character interactions.

There is little feeling in the script and pacing, but the talented leading actors, with a gravity in the softest of expressions, from devastation to sheer derision, sees to much of the emotional heavy-lifting. Ultimately, however, the women they portray are too caricatured, and despite the actors’ work, the film drags clichés through a half-hearted schmaltz cloud of familial upheaval and loss. Isabel, draped in fabrics and with tattoos of moon phases and mandalas, has nailed the white-woman-in-India look, while Theresa carries all the signs of an overworked business woman with too much money, downing vodka martinis and fighting caterers for more lobster.

After the Wedding is a perhaps too concerned with its dichotomies, lacking a subtler, more nuanced exploration of the distant lives of these two women. It boxes Isabel and Theresa into categories of wealth, motherhood and livelihood, pitting them against one another even as their lives become more woven together. For all the imbalances that the recent trend of gender-swapping in cinema hopes to correct, here it seems to have a regressive, even troubling effect.

Their parallel lives are a cause for competition and insecurity, and the insinuation that they owe each other a solution to their own private issues is uncomfortably archaic. What either character is supposed to have learned from these interruptions to their lives remains unclear – instead they are left stifled and unfulfilled, bound by others’ expectations rather than their own choices.

Michelle Williams and Julianne Moore – always worth a punt.

A limp and forgettable narrative gives us little to hold on to.