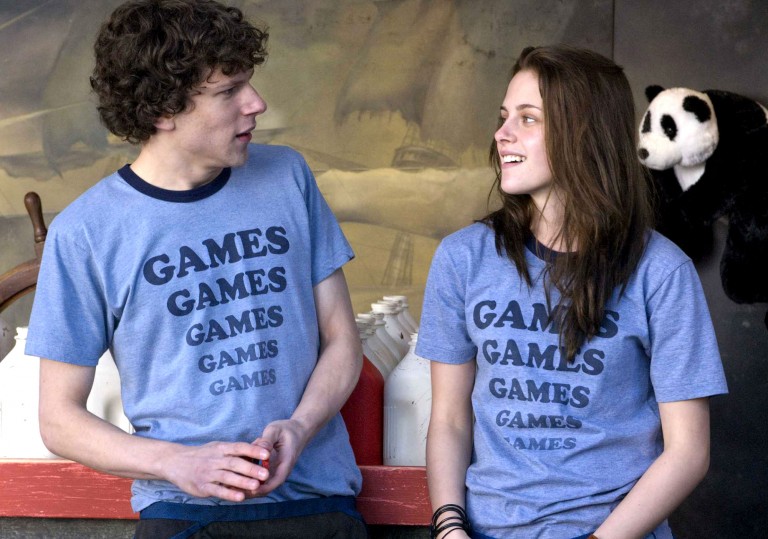 The trailer looks like more slapstick mayhem from the director of Superbad.

The trailer lied. This is a sensitive treatment of the universal themes of growing up given a laugh-out-loud overhaul.

Will leave you with a smile on your face and a warm fuzzy feeling inside.

This movie will strike a chord with anyone who’s done a crappy job that ended up being the best time of their life.

This is the passion project that Greg Mottola put on the backburner when Judd Apatow’s Hollywood laugh machine came calling with the chance to direct Superbad. So how do you follow a thigh-slapping, gag-happy behemoth? With a quirky, sensitive and beautifully played rom-com, it seems.

Adventureland is set in a pastel-shaded ’80s where a motley crew of pot-heads, geeks and bubble-gum blowing babes struggle through summer in Pittsburgh as carnies running the booths at an old-school amusement park. Managed by a comically rampant Bill Hader (Seth Rogen’s bungling cop partner in Superbad) who rules the park with an iron fist – “We pay Malaysian kids 10 cents a day to make these prizes. We can’t just give them away!” – a rickety roller coaster and hash-cookie-fuelled dodgem driving form the backdrop to a wasted summer for Jesse Eisenberg’s James.

It’s a summer that Mottola experienced first-hand, and with a soundtrack featuring the likes of Falco’s ‘Rock Me Amadeus’ we’re transported to a version of the ’80s that recalls the styling of Donnie Darko. Whether or not you’re a child of the decade that gave us cheesy pop and an actor in the White House, this movie will strike a chord with anyone who’s done a crappy job that ended up being the best time of their life.

Compared to the cold desolation of actual ’80s rites of passage movies like the drug-fuelled adaptation of Bret Easton Ellis’ ‘Less Than Zero’, it is, despite its occasional Superbad-ness – “You gotta show me some muff!” – a misty-eyed view of a young man’s yearning for life away from a small town.

Ryan Reynolds turns up in an unlikely cameo as the theme park lothario who’s a classic big fish in a small pond. He uses the boast that he once jammed with Lou Reed to snare Twilight’s Kristen Stewart. James has fallen for her in a big way, while Reynolds dishes out relationship advice to further confuse the love-struck youth: “We’re men. We’re wired to meet our needs.”

It’s here that Mottola keeps two plates spinning. On the one hand we have a retro cool comedy with big hair and smutty one-liners – “Stroke it into a tube sock and eat my dick cheese!” – and on the other a curious love triangle that speaks of Reynolds broken dreams (a washed up repairman at an amusement park clinging to youthful ambitions) and Eisenberg’s dilemma – whether to follow his heart or his manhood.

Like all films that strike a chord, you’ll find yourself replaying your own memories as the credits roll on a comedy that fires the heart.

The trailer looks like more slapstick mayhem from the director of Superbad.

The trailer lied. This is a sensitive treatment of the universal themes of growing up given a laugh-out-loud overhaul.

Will leave you with a smile on your face and a warm fuzzy feeling inside.