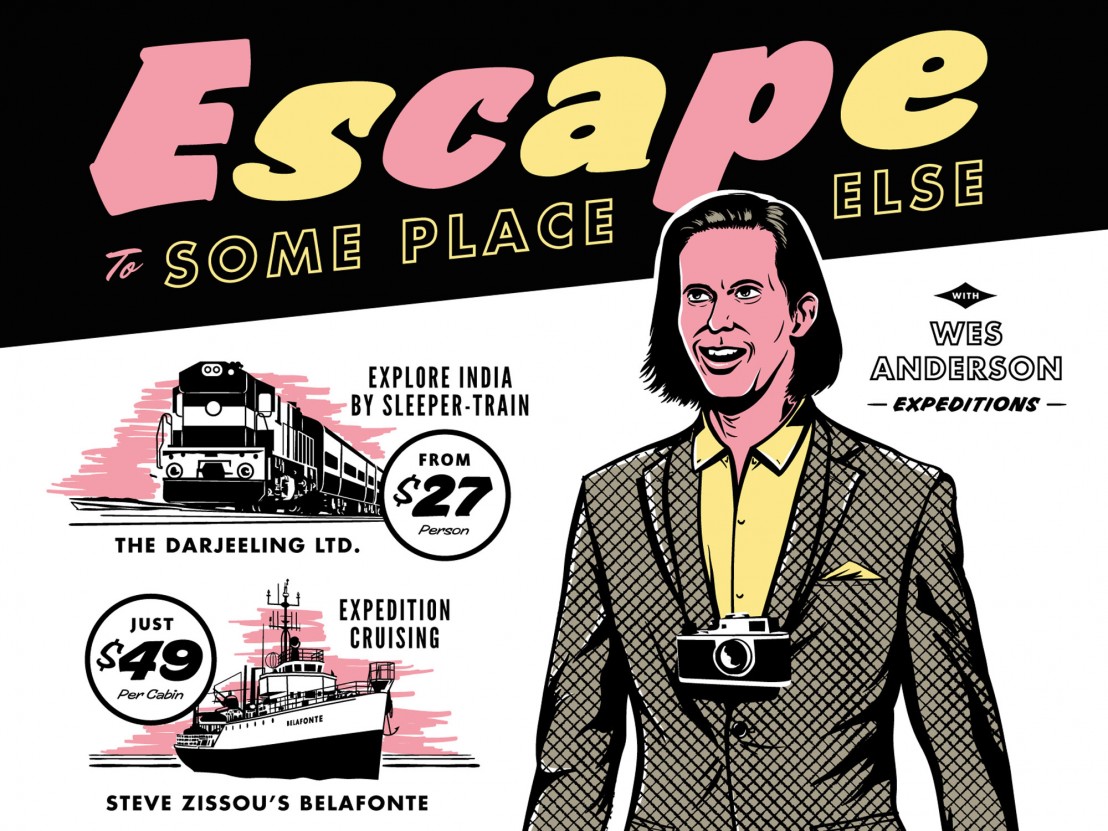 There are few directors who make more instantly identifiable films than Wes Anderson. If you don’t twig on to the fastidious framing, the cartoon-styled action, the droll dialogue, the regular rotation of bit-playing Hollywood character luminaries or the subtle undertow of regret and melancholy, then you’re either blind, or haven’t seen any of his previous movies, which include Rushmore, The Royal Tenenbaums and, most recently, Moonrise Kingdom.

His latest is a ’30s-set, mittel-European comic caper named The Grand Budapest Hotel which was inspired by the writings of Viennese author, Stefan Zweig. The film sees Ralph Fiennes plays M Gustave, a hotel concierge who becomes embroiled in the theft of a priceless painting named ‘Boy With Apple’ along with his loyal lobby boy, Zero (newcomer Tony Revolori).

LWLies: Do people send you doodles and illustrations that have been inspired by your movies?

Anderson: There are a few things, but not that much. There’s one Tumblr site in particular that’s filled with different things that kids have done. For this new movie, there’s an Egon Schiele-type painting of some lesbians. That was made by someone who we’d seen some drawings he’d done of one of my movies. So we set his stuff aside and said, well we might need him in the future. So we found this guy through his fan art. Then we had him do the Schiele, which is totally different from his other stuff, but we looked at his portfolio and saw that he’d gone this route before.

So you do remember the things that you like?

There’s another instance in which a guy produced a set of playing cards with characters from all my movies. I thought they were great. For me they weren’t so much characters from movies, but friends, so here’s Kumar and here’s Waris. Matt Zoller Seitz then used him to illustrate and design his book, ‘The Wes Anderson Collection’. It was that same process of discovery. On the other hand, we have a new Blu-ray of Fantastic Mr Fox coming out on Criterion Collection. For that, we got this guy called Turlo Griffin who had done all kinds of paintings that were actually in the movie. The mother in the story paints, and Turlo did all her paintings, including a great big mural. He also did paintings that worked as concept art for sets.

Each frame of The Grand Budapest Hotel is like a fresco of tiny details. Do you have a notebook that you carry around with you to remember everything?

In the case of this… I’m sure there’s not an answer to that question. First we figure out the cast, as the biggest amount of frame space is taken up with these faces and bodies. We figure out who they are and what they’re going to look like. Then I spent a lot of time on the The United States Library of Congress website. They have this thing called the Photochrom Collection and it’s wonderful. It’s these black-and-white images that have been colourised from between 1895 to about 1905, maybe 1910. They’re cityscapes and landscapes and there are just thousands of them. And they were made to be commercially available.

Do you feel that your movies are becoming something akin to animated photographs?

That’s funny, because at one point we thought we might make a black-and-white movie and colourise it. We did all kinds of tests. I guess what happened in the end was that we started making sets and I love selecting colours. And I thought, well I don’t want to turn this black and white. So we ended up not doing it. Once we knew all these places we wanted to visit, we travelled for a long time and we were learning all kinds of things. Lots of things went into the movie that came from us just wandering around. In the Jude Law and F Murray Abraham part of the movie [who narrate M Gustave’s story] it’s communism. The hotel has changed in a way that reflects political reality. Which wasn’t in the script at all. You wander around Hungary and the Czech Republic and you see this happening to all these old places. We wanted to find these  classical old towns, then we’d get there and think, look what they’ve done to it! But then we thought we should absorb what happens to these places. It went from being about a decaying hotel, to revisiting that hotel at an earlier time and under a different regime.

When you were writing this movie, did you always have Ralph Fiennes in mind for the role of M Gustave?

He’s based on a real person. I thought of Ralph early on because I knew him a little bit and I’d seen him in a play that he was very funny in and I was just a fan. I also wanted to work with one of these actors who… takes over a bit and is a real force on set. Like Sean Penn. I thought Ralph was going to be one of those, and he is. But, during the writing, I was picturing him as my friend who he’s based on. But I will say, once I saw Ralph getting into the role, my friend kind of disappeared.

You have this regular troupe of actors who all appear in small roles here. Was it a similar thing for them? Are the roles written for the actors or is it vice versa?

Most of these parts were quite abstract. I don’t know that I had so much of a visual feel for these characters. I was more interested in what they sounded like. What I think usually happens that when I’m in the middle of writing it, I start to make little lists of things – just to take a break from trying to figure out what happens next. I usually have ideas of which actors might work in certain parts. Most of the actors here are people I’ve worked with before, and I made these initial connections because they are just my favourite actors. And not only are they my favourite, but I have all their email addresses.

Do they ever say no?

Oh yes, definitely. I will say, the people who I’ve worked with before say no less often. Usually we can sort something out. If it’s a friend, they probably don’t want to say no. Who have I not worked with apart from Ralph? Well there’s Jeff Goldblum, who I’ve known for years. Edward Norton and I are friends. Adrien Brody, we’ve been friends since Darjeeling. We’ve got Jason Schwartzman and Owen and Tilda and Bill; Bob Balaban.

Are you interested in conforming to any kind of realism?

The written dialogue is never what you’d call realistic. The syntax is convoluted, and that’s the point. I made a specific decision to have everyone speaking in their natural tongue. Saoirse Ronan is Irish, and she’s never spoken in Irish in a movie before. I don’t know how people would talk in Zubrovka. I don’t think they’d speak like Jeff Goldblum. This also led to something else, as the one part that people auditioned for was the role of the young Zero. And I’d seen it performed with a Tunisian accent, an Israeli accent and a Lebanese accent. Then when I saw it done with an Orange County accent, I thought – that’s better! This kid really jumped off the screen in his audition.

How early in the writing process did you decide to filter the story through multiple narrators and timeframes? Is the style of the film a reflection of how details are being remembered and reformulated?

That I actually know the answer to. The process of making the movie comprised of two steps. First, you have the idea of this character who has these relationships with older women and his friend dies and he inherits this painting and this family is against him and so on… My friend [and co-writer] Hugo Guinness and I had all these scenes in a kind of rough form and he wasn’t a hotel concierge and it wasn’t set in the past. Then, I started reading these books by Stefan Zweig. At the time I thought I’d like to adapt one of these Zweig books, perhaps ‘Beware of Pity’, but really what I wanted was to try and do my own version of one of these. Many of them have this form of one person telling someone else a story. ‘Beware of Pity’ begins with the author delivering a message to the reader. Then it goes to the author some years before and he meets this mysterious character who he knows is a writer and then he tells him the whole novel. While I was reading that book, I was in Paris and I visited the Jardin du Luxembourg and I saw in the corner of the park, all by itself, a bronze bust of Zweig. I just stumbled across it.

What’s his relationship to Paris?

He’s Viennese, so I think his relationship with France was simply that his books were popular there. He did write about Marie Antoniette, and I’m sure he spent quite a bit of time in Paris. He lived in Switzerland, Belgium and London. In America he was out of print for a long time. Pushkin Press have now released them.

Did someone recommend Zweig to you originally?

I’m quite a slow reader. We watch a movie ever night, which we usually fall asleep to. I buy a lot of books. But I don’t read a lot of books. My average is about 30 pages. I can’t think of anyone else who I’d never heard of, and now I’ve read everything they’ve written. I think that the way I heard of Zweig was that I was in the Village Voice book store in Paris and I saw this book with a Klimt on the cover and I just read the back of it and was drawn in that way. It was a nice edition of it too.

Can you still enjoy something without thinking how it could be made into a movie?

Yes, a bit. I like to travel, but it helps me if I’m travelling with a goal and there might be a movie at the end of it. I love Raymond Chandler and Dashiell Hammett, and I was reading some of their books on a train recently. I just couldn’t stop thinking: there have been so many screen versions of these stories, there is absolutely no room for me to do one more. But, while I’m reading them, I can’t help but try and come up with ways to make just one more. But you have to recognise that, as books, they have found their perfect form already, so you don’t need to do anything.