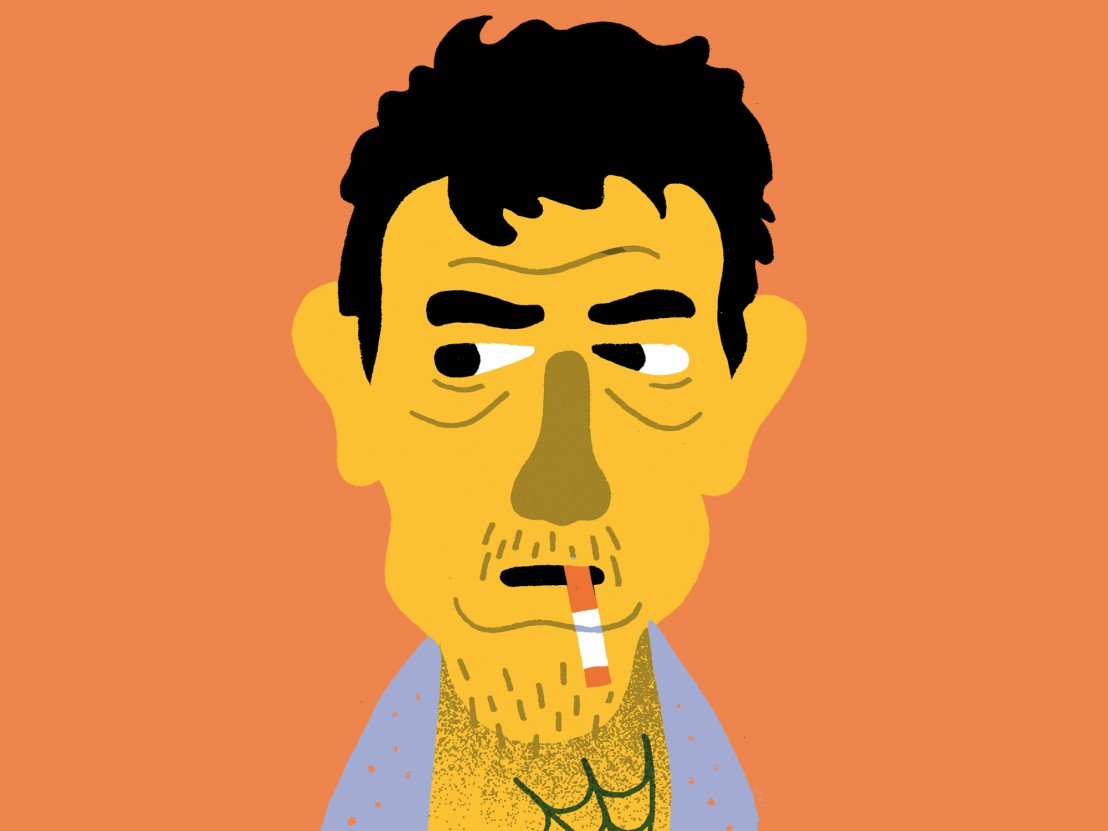 Ben Mendelsohn: ‘The hardest things to act are fucking and fighting’

The F-bombs fly in our interview with the Aussie character actor who appears in Starred Up.

LWLies caught up with the wonderfully foul-mouthed Aussie character actor who chews the brutalist scenery in violent Oedipal prison yarn, Starred Up. Mendelsohn also talks of his work with Terence Malick, his conception of The Method, and his worst ever audition.

LWLies: So you don’t like to watch your films, is that right? Have you seen Starred Up?

Mendelsohn: No, as a general rule of thumb, no. I stopped a while back.

That Jack O’Connell’s going to be quite the star.

I know he’s been a star here for a number of years, in a kind of nascent form, but you can really feel him springing forward with this one. He’s doing that big old Angelina film, and that’s a huge studio number. They’re onto a good horse, they know what they’re doing.

It’s such a fearless performance.

And that’s it. That’s the thing about what Jack’s done – he went for it. You get a sense with him that whatever the work he’s doing, there’s this thing going on behind all those laddish tropes. It’s what makes him really fucking watchable. He was really brave. He went for it.

You’ve spoken a lot about the creative input you had on The Place Beyond the Pines. Is that something that happens on a lot of films?

Nah, it’s different horses for different courses in terms of that. Most times all you’re doing is playing the fucking material anyway. You’re doing whatever the scene needs. On something like The Dark Knight Rises, you get there, you shoot and off you go. With Place Beyond the Pines, we started it. We rehearsed, we had the time, we were kicking off. It’s not so much that I have any input, that was a case of Derek having written something and gone, “I dunno about whether I like what I wrote back then, maybe we’ll do this instead…” I don’t come up with a bunch of ideas, what I tend to try and do is pick something out of what’s been given to me. That’s what I think the job’s about. I don’t have a wealth of ideas, but I do try to keep an eye on what’s being talked about, that’s all.

Do you find what input you do have is taken more seriously when you get to a certain level of success?

Yeah… ish… And again, it depends. What you’ve always got to boil it down to is that if you’re gonna go and do The Cherry Orchard, you’re not gonna fucking change a word, because it’s not on you. You’re just gonna do it the best you can. You don’t fuck with what it is, you just try for the best. Between the lines of getting a job and trying to pay your bills and that place where you’ve got a few options you can choose between, it’s all the same job at the end of the day.

Are you still auditioning now?

Not really, not for a little while. I mean with Batman, Chris Nolan hadn’t seen anything I’d done, so that was off a tape. Fucking Andrew’s film, that fucking…

Fucking thank you. That one I had to fucking audition for.

Really? I thought you guys were mates?

Exactly. See, they still fucking try it on… And I must say, the prelude to the act and the bits you’ve gotta do after… The auditioning and the fuckin’… I dunno, traditionally they’re things I don’t shine at…

What’s the worst audition you can remember?

God. Look, the worst ones were always the American ones, where I would just go in and not do the scene at all, but I’d say to the person who was directing that I was trying to send a message through… Like, listen, not this one, but there’s another one you’re doing… Now if you want me for that one… You’d just end up with really bemused casting directors who didn’t call you back in for anything else. I’ve had some fucking shockers here years ago. I had one… Fuck… I can’t even remember what it’s fucking called… Waterworld?

No, not that one.

Is that by the guy that did Paris Trout? Whatever. I did one for him that was pretty fucking unimpressive. I mean, I didn’t think it was unimpressive. He did though. Whatever… Have you seen Fiery Hawk?

Okay, go on YouTube and watch Fiery Hawk. That’s the best audition piece that I’ve ever seen. It’s a skit. That and Good Day Mr Kubrick. That was from when actors could first put themselves on tape, back in 1982 or whenever it was. That was for Full Metal Jacket. Take a look at both of those, go on your little YouTube thing, but particularly Fiery Hawk. They fucking nailed it. Generally I tell younger actors… y’know… don’t.

So how do you approach character?

Here’s what I think’s happened, if I may? I’m gonna give you my very brief, condensed idea. Stanislavsky came along in reaction to people being particularly stiff and formalised, very blocky and whatever. But then, it sort of had its high point and its low point at around about the same moment. In the early ’80s. It comes to its full flourishing, then immediately runs out of puff. I think it has its place as this little special secret, and of course that varies from actor to actor, but I do think that outside of a very specialist sphere it has any bearing whatsoever.

What’s ended up happening is that people feel like they’ve gotta, in some way, touch the idol of character development, which leads to the kind of shoe moment you’re talking about. It’s become something that’s there to be consumed along with the film itself, it’s like one of the special extras on the DVD. I think it’s started to overwhelm it. Any particular actor has got their bits and pieces and the way they do stuff, but the problem with going on too much about characterisation and this, that and the other is, you look at any actor and you’re always gonna see similarities in the way we do things. The way we move, the way our faces move, that never changes, but there is a very definite end. I can understand someone talking about it in a drama class, but I do think it gets overwrought.

So what’s your thing then?

My thing is about the relationships between the humans generally. Most of my energy is spent trying to get comfortable on the set, trying to make it a less hostile environment, and then just trying to have something that actually happens. Some sort of exchange. You can feel it, it’s like a wave, but that’s the exhausting part of it too. It’s accessing feelings and all that shit, that’s the hard work.

So do you find those feelings easy to turn on and off?

The main thing is you just want to try and get comfortable with the other people. The hardest things to do in terms of that are fucking and fighting, both of those require both participants to feel like they know what’s going to happen. The hardest work was with Scoot [McNairy, on Killing Them Softly]. We spent a long time doing all that, getting to the point of familiarity where we could fucking hate each other.

What about with Jack on Starred Up?

Well, that was more about knowing what we had to do, and keeping a distance. There was one thing I did do, which I thought was a good idea, which happened towards the end of the film. That last scene we have together. It was a difficult day, a shit day. We were way behind. So I went somewhere that day, because they were fucking around with the vibe on set. I think you’ve got to try and protect the space, that’s what I think, and that changes from actor to actor, what that’s about. For me, it’s usually at it’s best when everyone’s having that easy-going feeling. That’s how I like it.

You said, talking about Animal Kingdom, that you could be quite challenging sometimes. What did you mean by that?

David and I had known each other before that film. That was a very particular… that was when I think I first started to feel that there was a space that I could and should take up. That was a lot to do with James [Frecheville] because he hadn’t done anything before, and it’s only me stealing tricks from other people that I’d seen and I thought it would be a good idea. That came from doing The New World where Q’Orianka and Colin were kept apart to try and get some kind of exchange going on between them that wasn’t forced. That was all, I just tried to do that with James on that. He’s actually, contrary to what the film feels like, he’s a very… he comes across as a very confident young man, and I didn’t want him… I just didn’t want him in my space.

Speaking of The New World, what was your first meeting with Malick like?

That was… it was essentially just at a dinner table, through Andrew Dominik. They’d been talking about doing something for a while, so it was just a dinner. It was a really shitty work period, there’d been nothing happening, and he offered me a job. But I think I played more of a crew function on that film.

Oh, he’s fucking great. He’s not like anyone else, and he’s very much a one-off in terms of a director. It’s very unusual to meet someone who… Terry comes at it from outside the typical crewing experience, and people who don’t come up and through a crew can have very different expectations and a very different way of communicating to the machine of the crew, and those who come up through it. Terry’s not like anyone else and he’s also very private, and that’s not something I think that anyone with any regard for him is gonna want to tramp on too much… Look, I’ve been pretty fortunate.

Can you talk about How to Catch a Monster at all?

Yep. I can say that I have no idea where it’s at. I can tell you that we went out into the wilds of Detroit and that working with Benoit, the DoP, and Ryan… Look, touch wood. I think we got something.

Who do you play?

He’s Dave. Dave is a sort of a banker-cum-vaudeville-entrepreneur. Not vaudeville, more Grand Guignol. It’s very much a film about the predator moving into the family and socio-economic environment. The wolves, as it were, that are coming in to tear it apart. It could be beautiful. Who knows? Who knows until we see it?

Any idea where it’s at?

No idea. No idea. They’ve got their own thing going on. Ryan’s somewhere in the world cutting away, but that’s all I know.