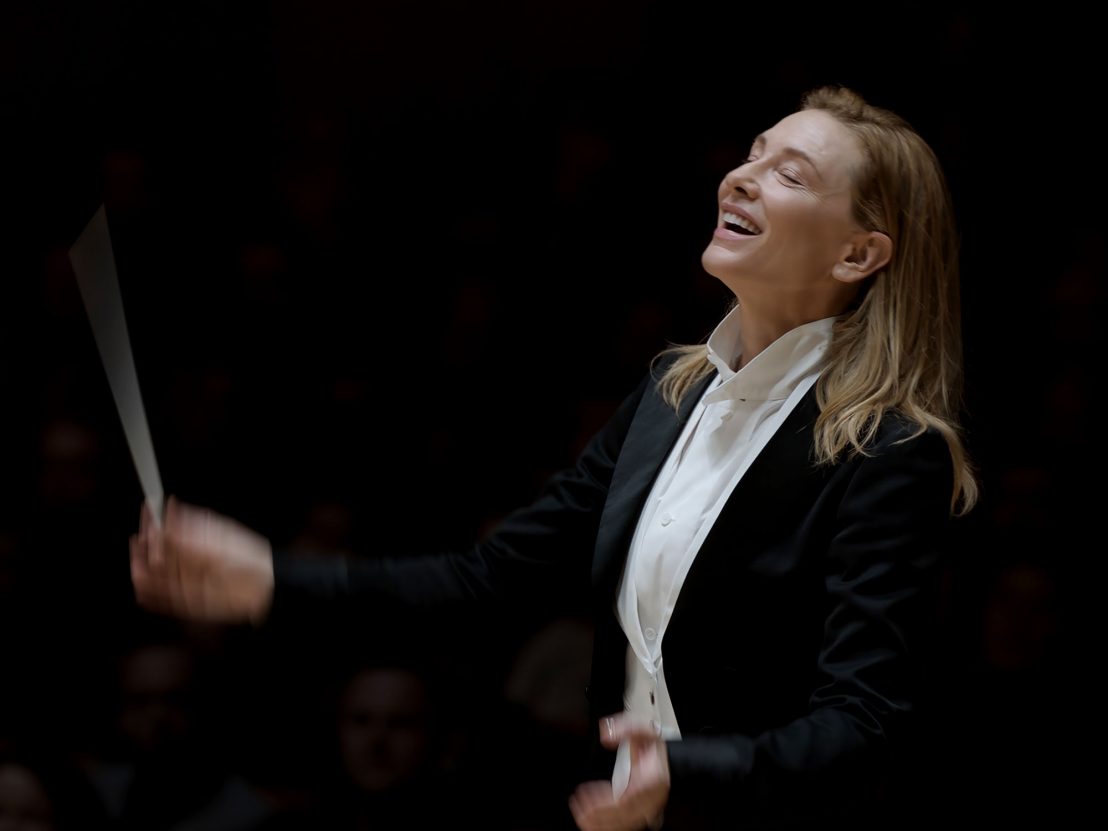 Cate Blanchett is captivating as formidable, world famous classical composer in Todd Fields’ frustrating study of the cult of genius.

Through Todd Field’s Tár, there is a spectral presence that announces itself in a low, continuous humming sound, and the occasional strange events which befall the protagonist (a metronome ticking in a deserted room; a two-tone noise of unknown origin). These hauntings appear to be manifestations of her creative obsession – Lydia Tár (Cate Blanchett) is, after all, the most celebrated composer alive – though as the story unfolds, perhaps they are something more sinister. Her guilt writ manifest, much in the way Lady Macbeth could never quite scrub the blood from her hands.

We meet Tár at the peak of her powers. Ahead of the release of her highly-anticipated autobiography, ‘Tár on Tár’, she takes part in a New Yorker masterclass where the interviewer rattles off her impressive credentials, including her EGOT status and current position as the principal conductor of the Berlin Symphony Orchestra. Tár appears regal and demure. Her assistant Francesca (Noémie Merlant) dutifully watches from the wings.

As we follow Tár from this initial impressive tableau, elements of her personality begin to unfurl. While teaching students at Juilliard Music Conservatory, one queer Black student storms out, referring to Tár as “a fucking bitch” after she questions his aversion to Bach on grounds of his misogyny. Tár believes that an artist’s personal life shouldn’t overshadow their professional achievements.

As a student of Leonard Bernstein – whose personal life was the subject of much scrutiny due to his sexuality and political activism – this might initially seem like a progressive stance, but as we learn more about Tár’s past and present, it becomes clear that her belief in the art, not the artist, might be more than a little self-serving.

In Berlin Tár lives with her partner Sharon (Nina Hoss), the principal violinist in her orchestra, and their young daughter Petra. While they have a stark modernist home together, Tár retains her small flat where she works on a new composition. This, along with her erratic decisions involving the future of the Berlin Symphony, creates tension between her and Sharon, which is exacerbated by the arrival of a talented young cellist who Tár becomes infatuated with. As Tár prepares for what should be the biggest night of her career – conducting Mahler’s ‘Symphony No. 5’ – her personal indiscretions threaten to derail everything she has worked for.

If the story sounds familiar, it’s because we’ve heard it a thousand times before in the form of male geniuses put on a pedestal despite their failings. The only significant difference in Tár is Lydia’s gender and sexuality, which perhaps serve as a warning that women can be as susceptible to abusive behaviour and practices as much as men – though given that Blanchett is presented as a lesbian with traditionally masculine taste and affections (she is referred to as her daughter’s father several times) there is an uneasiness in Field’s characterisation which veers towards the predatory lesbian trope.

The decision to present Tár as the victim of false accusations (as well as very real accusations) is a curious one; at times it’s as though the film wants us to feel deep sympathy for her, but her downfall is very much of her own design, and she is given multiple chances for redemption that she never seizes.

Hildur Guðnadóttir’s austere score is marvelous, lending real gravitas to the impressive orchestral scenes and creating a sense of dread with the atonal hum present for most of the film. Similarly, the muted cinematography of every space but the concert hall shows that Lydia only really comes alive when she’s at the podium. Blanchett is as captivating as ever, sly and seductive and conniving and cruel, while Nina Hoss provides the perfect foil as the woman who has had enough of humouring the ‘quirks’ that come with loving an artist.

But the elements of the film which deal with so-called “cancel culture” feel clumsy; at the end of the day, wanting people in positions of power who then abuse those positions to be reprimanded is not such a wild thing to ask. Tár is presented as a volatile but remarkable person, and by the end of the film, we’re led to believe she has no choice but to take work in South-East Asia that is beneath her, as she’s been blacklisted in America and Europe.

It’s true that celebrated straight white men who fuck up are given much more lenience and redemption than anyone else (just look at the penalisation of Will Smith compared to Johnny Depp or Shia LaBeouf), but Tár doesn’t seem particularly interested in this double standard. Instead, the film asks us to turn the music up a little louder and pretend we don’t remember who composed it.