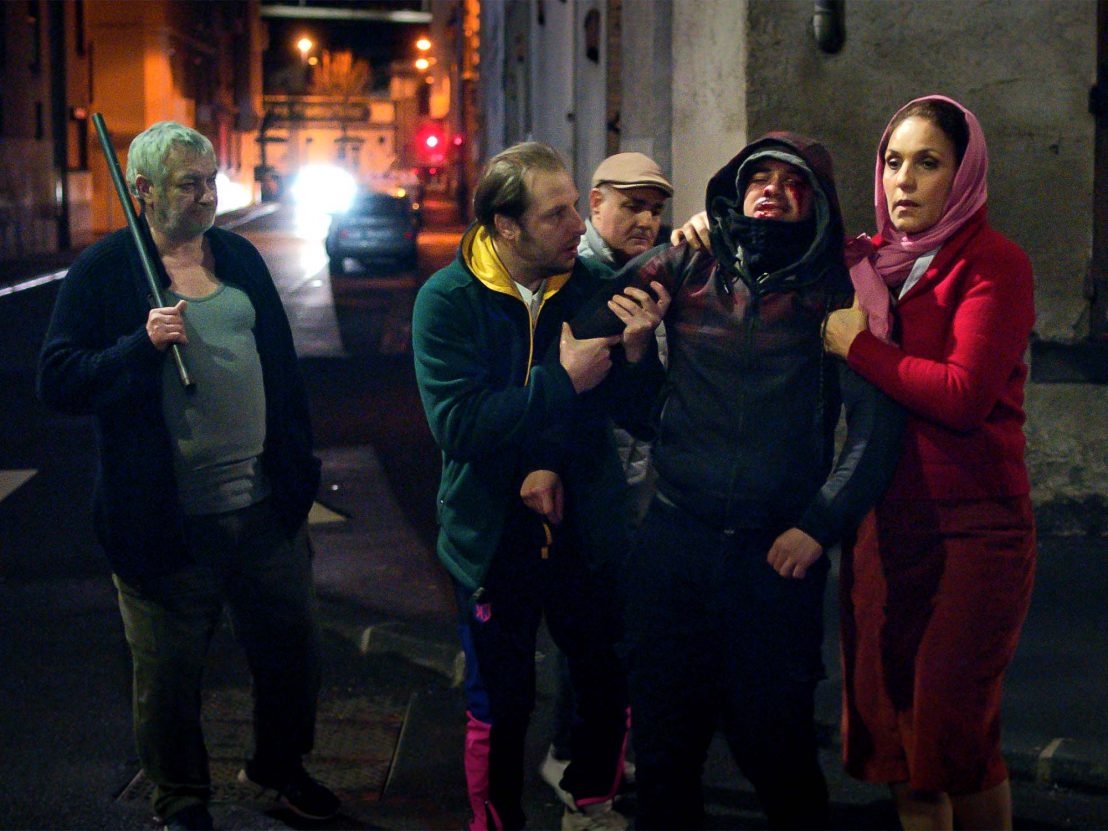 A man kitted out head-to-toe in fluoro running duds is stopped in his tracks at the sight of a woman who is smoking a cigarette on the other side of the street. The dismayingly forward Médéric (Jean-Charles Clichet) who is a paunchy everyman who believes himself to be a hunk, crosses over and asks the woman, Isadora (Noémie Lvovsky), on a date. When she alerts him that she is in fact a sex worker, he insists that they meet for a bunk up with no money exchanged because he can do things that other men can’t. She is then bundled away in a car with the contact details he has forced into her hand.

The eccentric latest from French filmmaker Alain Guiraudie (best known for 2013’s nudist beach whodunit, Stranger By the Lake) is a whimsical urban fairytale set under the dismal grey skies of Clermont-Ferrand at Christmas time. It charts Médéric’s circuitous attempts to whisk Isadora away from her overprotective pimp husband, and seldom succumbing to any type of extreme emotion, he grinds his way towards this goal, intent to secure her love by hook or by crook.

One of his other major hurdles is a supposed terror attack in the town centre, which has served to stoke paranoia among both the curtain-twitching denizens of our hero’s housing block, and the local police constabulary. When, one evening, a young Muslim drifted named Selim (Ilies Kadri) rolls up on Médéric’s doorstep asking for charity, the lothario plays good samaritan and lets him into the stairwell for warmth, unknowingly stoking the tensions of an ongoing gang war in the process.

With Nobody’s Hero, Guiraudie appears to be unfurling an overt and acerbic political screed about the discontents of life in modern France, with most characters harbouring a full bingo card of racism, misogyny, hypocrisy and knee-jerk recourse to violence. And yet, against all odds, the director manages to imbue his rogue’s gallery of misfits and malcontents with a level of sympathy that it would’ve been very easy to deny – even M Coq (Michel Masiero) on the top floor, with his arsenal of guns and bombs, is essentially just a man using xenophobia as an excuse to alleviate the boredom of his life. Hardly excusable, but Guiraudie makes it understandable.

By the time of its final act, where we know the geography of the three prime locations – Médéric’s apartment, Isadora’s suburban semi and the by-the-hour hotel where she conducts her dealings – the film has shifted towards the tradition of the classical French farce. Characters are all running around town looking for one another, getting into scrapes, striving against the odds to achieve the aims of their quest, and, like all good farces, it all leads towards a mega punch-up on a front lawn.

It’s perhaps a bit too ironically detached for its own good, and the deadpan is so dead that it’s occasionally impossible to feel a pulse. Yet in its melding of old school fantasy and romance with more sober contemporary concerns, it does work as am entertaining, if not exactly trenchant, commentary on these troubled times.