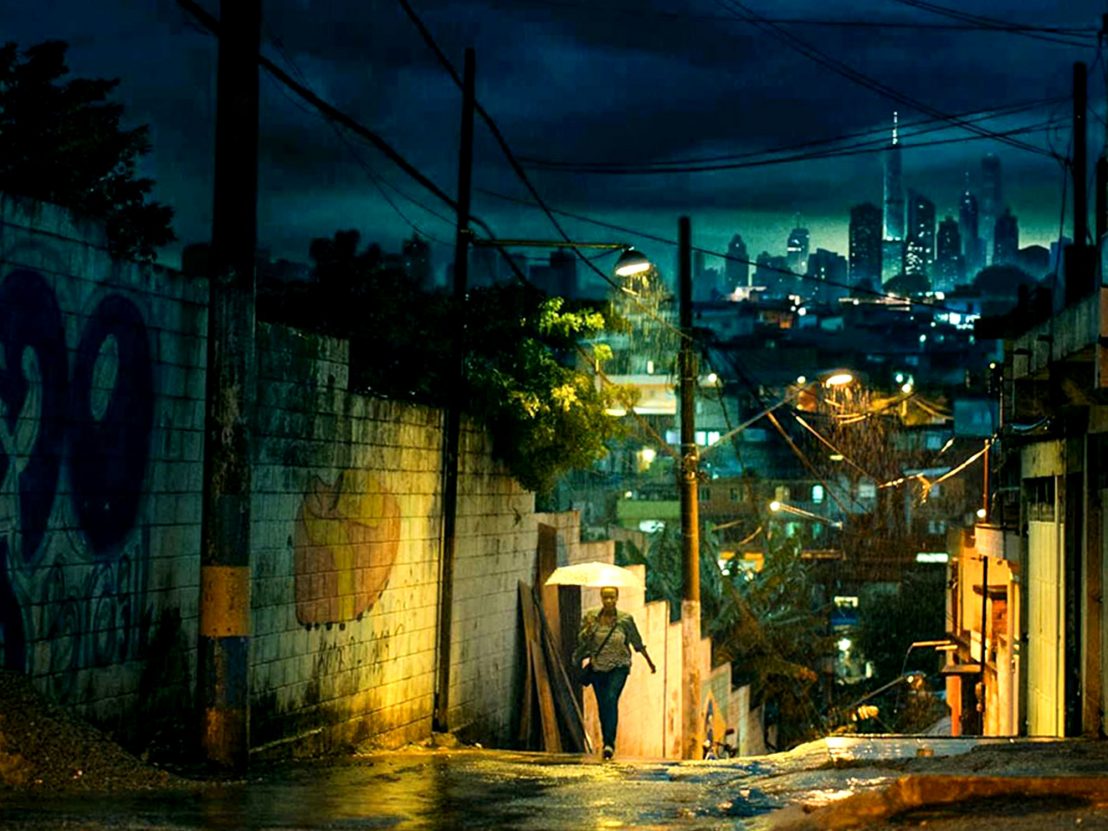 Two of the more unique and unpredictable films at this year’s Locarno Film Festival came from one nation, Brazil. In the main competition, Marco Dutra and Juliana Rojas’ Good Manners (As Boas Maneiras), and in ‘Signs of Life’, the festival’s space for more experimental, unclassifiable work, Adirley Queirós’ Once it Was Brasilia (Era Uma Vez Brasilia). Two idiosyncratic films that take unexpected deviations from a genre format, both earned special mentions in their respective competitions but were perhaps too divisive to take the main prize.

Good Manners, which ended up being awarded the Special Jury prize, begins just as its title suggests – a polite, middlebrow comedy of manners, albeit one with race and class tensions simmering below. The manner in which they break through thoroughly defies expectation. The scenario is as follows: Ana (Marjorie Estiano) is a wealthy white São Paulo urbanite looking to hire a maid to look after her yet-to-be-born son and tend to her spectacular apartment.

Clara (Isabel Zuaa) is the chosen candidate, a young, quietly confident black woman who, despite her lack of qualifications, has something about her that leads Ana to believe she will be a good fit. This premise – informed stylistically by a classic Hollywood theatricality, manufactured through artificial lighting, a pastel colour palette and false backdrops that are almost too pristine – quickly devolves into something else entirely.

The two character’s relationship develops subtly and unhurriedly. Dutra and Rojas’ script is carefully observed and their direction neat and precise, and Zuaa and Estiano perform their roles terrifically, with a nuance that teases out the tensions between them without making them appear insurmountable. Indeed, as Ana’s pregnancy advances she discovers a new taste for two things, for meat, and for Clara – a willing, slightly wary recipient of her affection who she begins to seduce with a passion that is literally ferocious. Just as soon as this slowly built about-turn has emerged, another arrives much more abruptly. Ana’s baby bursts dramatically from her stomach, fur-covered and feral, her carnal desires rather shockingly explained and her screen-time ended with a splatter.

As mid-point plot pivots go, it’s one of the more unforgettable ones. Yet, in the film’s young werewolf second hour things become a little more familiar. Time moves forward seven years, Dutra and Rojas moving through genre influences as Clara is seen raising Ana’s child as her own, locking him away whenever the full moon emerges in order to contain his hair-covered, fang-toothed inner self and the bloodthirsty desires within. This latter half is much less effectual, showing too strong a reverence for existing cinematic convention and less of the willingness to dismantle it that the first hour displayed, and taking a more simplistic, surface approach to the narrative and what lies beneath it.

At its most surprising – as in the painted interlude explaining the baby’s twisted origin, a nauseous sequence involving a cat just before that, or the wonderful musical sequence that closes the film’s first half – the film feels unbound and exciting. When it fails to, it is a little inert. After the initial intrigue over exactly what sort of film this might be begins to dissipate, what is left below is less mysterious. 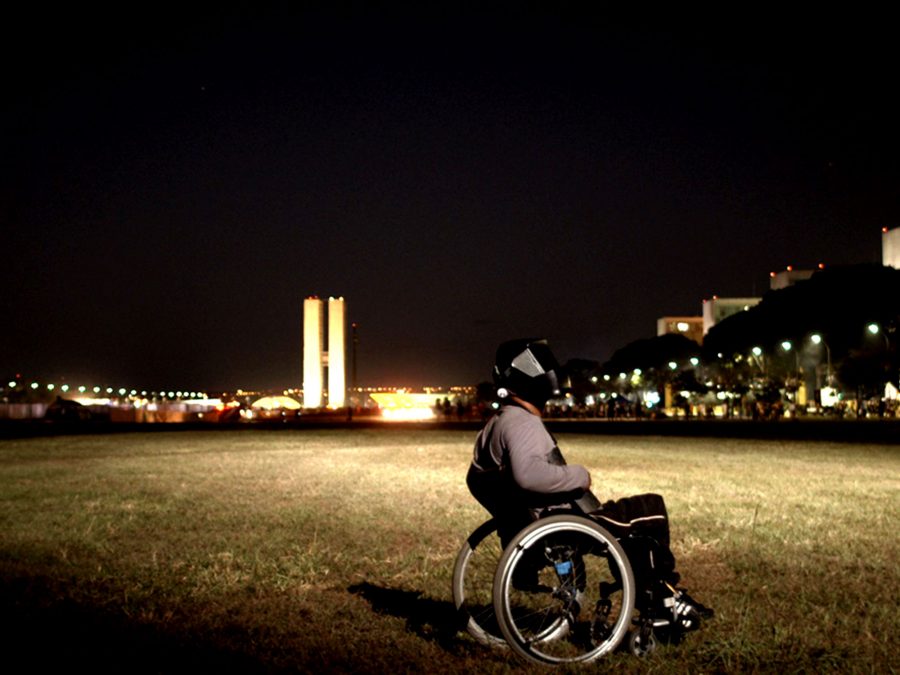 Adirley Queirós’ Era Uma Vez Brasilia remains compellingly cryptic throughout, the depicted situation and its allegorical purposes is more oblique still. Queirós’ film blends recognisable settings and scenarios with otherworldly elements, transposing an extra-terrestrial logic system onto an almost-real version of this world, emphasising the peculiarity of both. As the film’s concept can be understood, in 1959 “intergalactic agent” WA4 (Wellington Abreu) was sent to Earth to assassinate then-president Juscelino Kubitschek ahead of his establishment of Brazil’s capital, Brasília. Something goes wrong, and he instead lands in the city in the current day, finding before him a dystopian landscape and a militant, mostly invisible state ruling over a sparse, beleaguered population that is in the process of arming some kind of chaotic resistance.

Shot efficiently and creatively by Joana Pimenta, a talented experimental filmmaker in her own right, the film’s perspective rarely distances itself from WA4 and the odd characters he encounters, but achieves a distinctive look regardless. Locked into close frames, the exterior world is glimpsed as a fringe authoritarianism, with towering steel infrastructure, mesh fenced divisions and barbed wire entanglements visible in the periphery. Front and centre, a futurism is expunged through the costumes and design, seen in the mesh bodysuits and neon space apparel of the dissidents, or WA4’s silver turtle shell armour and bulky rocket launcher.

Context arrives via radio broadcasts on the soundtrack. Expressions of Brazil’s real world political instability are rendered through snippets of speeches from impeached previous president, Dilma Rousseff, and scandal-plagued current one, Michel Temer, a collage of ever cycling, often indeterminable reports of corruption, confessions, assurances and investigations. Whatever WA4’s original mission was supposed to prevent, the reality that has emerged is far worse.

Extremely lightly plotted, the film contains many sequences that extend well past the expected climatic point, and as a whole it’s tricky to piece together. The best of these long takes – such as the scenes where resistance fighters train in a performative, clumsily acrobatic fashion, or ones with WA4 barrelling towards earth, smoking cigarettes and cooking barbecue inside the claustrophobic confines of his scrapheap tin spacecraft – reach a comic catharsis either through their duration or in their interruption. When WA4 finally lands on earth, almost half way into the film, it’s with a crash and an enormous bang, cue some of the hardest laughter in Locarno.

As has been displayed frequently before, (Terry Gilliam’s Brazil, for example, which this has lower-budgeted, bleaker hints of), two opposing states can co-exist, especially in genre film. Both Good Manners and Once it Was Brasilia combine genre pastiche with serious, nuanced political critique with varying success. At their most effective, neither state undermines the other, instead heightening both.