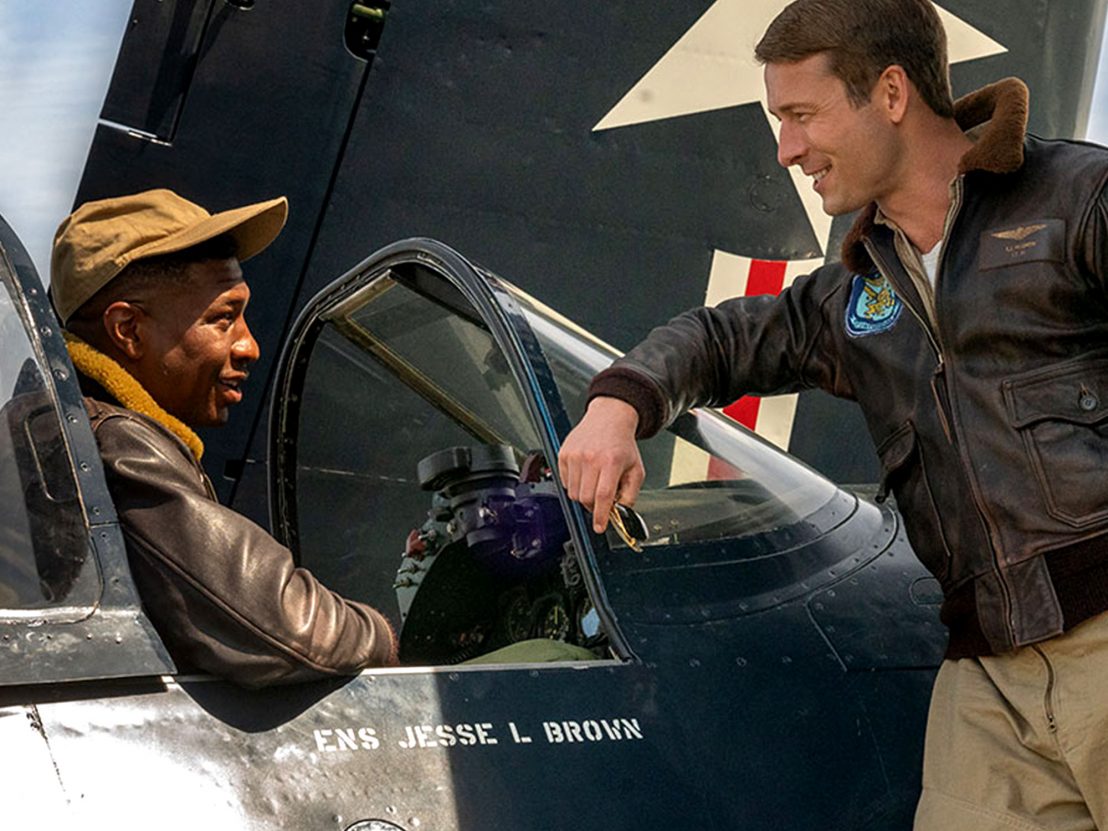 Glen Powell is a cocky sumbitch. Playing with the boys in ensemble films and the girls in rom-coms, and most especially as Top Gun: Maverick’s Hangman, he seems like the kind of guy who winks at you as he says “Yes, ma’am.” All dimples, crinkly eyes, and hard-sell flirtatiousness, he’s a narcissist who lets you in on the joke of his own absurd good fortune — Pauline Kael would have loved him, and I just realized he reminds me of Don Johnson on Miami Vice. In a word, he has the Juice. So what better way to follow his megawatt breakthrough in the biggest movie of the year of the year then by getting right back into the cockpit?

Unfortunately, Devotion, which Powell co-executive produced, and in which he costars as a Navy pilot in the Korean War, is a juiceless movie—a bit a wrung-dry, in its grimly underlit and undersaturated palette, its themes of interracial brotherhood among our brave boys in uniform, and even in its limp crowdpleasing scenes of aerial combat and camaraderie.

The time is 1950; as an opening title card explains, the armed forces are full of young men who joined up too late for WWII, but the Cold War is heating up on the Korean peninsula, where the skies, you might say, are now battlefields. (You might say, but the film certainly doesn’t.) Powell is the real-life Lt. Tom Hudner, wingman of Ensign Jesse Brown, the first Black man to earn his wings from the U.S. Navy.

Before their first meeting, Hudner hears Brown muttering to himself in the bathroom; the latter pilot, a celebrity in the only recently desegregated U.S. military, has a habit, we learn, of staring at himself in the mirror, repeating racist insults to his own reflection in a purgative ritual. (The rest of the unit is interchangeable platoon-movie eye candy. One of them’s a Jonas Brother?)

Will the proud, aloof Brown, who has achieved his pioneering feats against the headwinds of unimaginable racism, accept his white ally’s offer of friendship? Devotion’s main event is a reassuring rectitude-off between the unimpeachably charismatic Majors and Powell, which plays out first on peacetime deployment in Rhode Island and then maneuvers in the Mediterranean, where director J.D. Dillard milks midstakes drama from the challenges of mastering carrier landings with the blocky F4U-4 Corsair fighter, and wan comedy from the squadron’s shore-leave spree at a French casino—where, in a dubiously patriotic rejoinder to, say, Melvin Van Peebles Story of a Three-Day Pass, the bigotry of the French is contrasted to the loyalty of Brown’s mates.

Inspired by a minor episode in military history, blown out to 138 draggy minutes, Devotion finally gets to the 38th Parallel in its third act. Worshipful of the sacrifice of combatants in America’s “forgotten war,” per the title card, the film is at once vague and rah-rah about the actual purpose of the Korean conflict.

Largely, it seems to have been an ultimate proving ground for pilots eager to test their mettle and capacity for self-sacrifice—a purely metaphorical battleground, like in Top Gun: Maverick, whose wintry terrain and faceless Enemy seems a plausible match for Devotion’s snowy North Korea and out-of-focus communist combatants. But, despite some handsome IMAX skyscapes, Devotion’s flying scenes are—inevitably—far more perfunctorily storyboarded and CGI-enabled than the cinema-restoring Maverick.

I will, if you’ll permit me, spoil the best part of Devotion: on shore leave in Cannes, strolling along the Riviera, one of the flyboys observes that Boulevard La Croisette “doesn’t look like the kind of street that has a whorehouse on it.” I laughed, but the truth is that the story of Cannes, Glen Powell, fighter jets and movie magic has already been written for the year, and this film is a footnote at best.