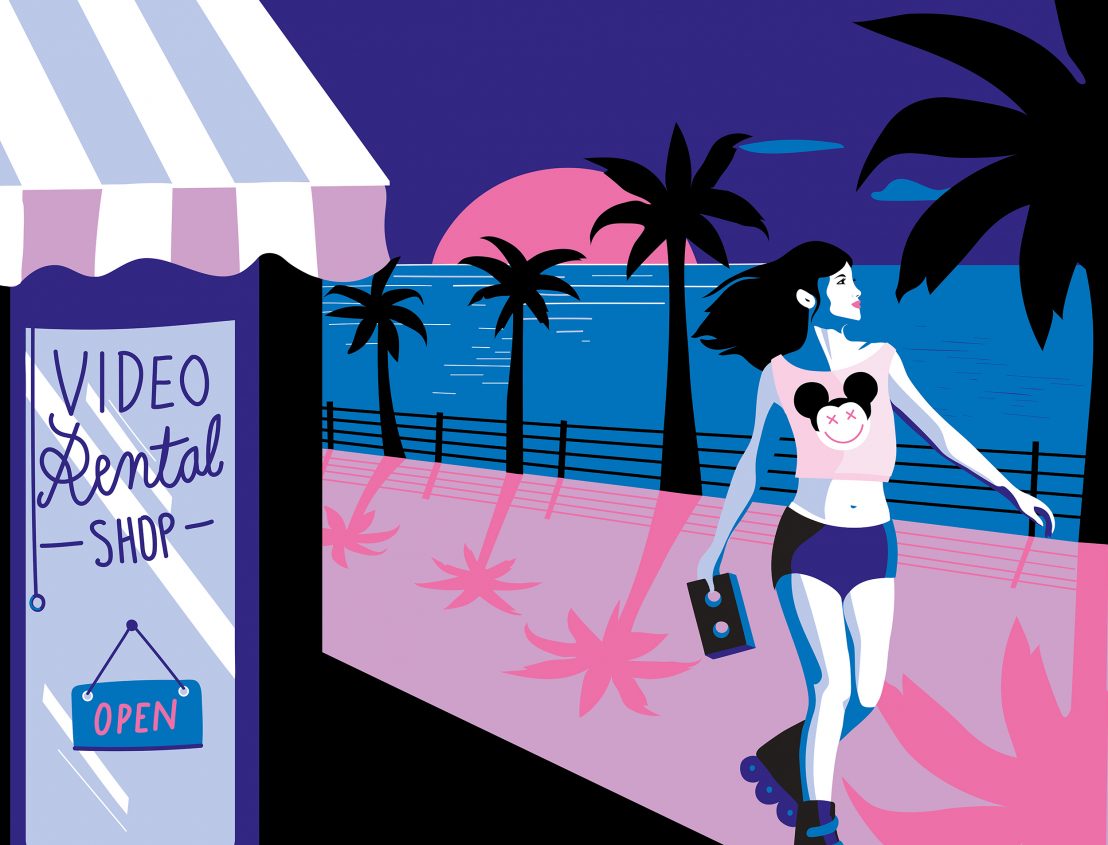 Hollywood may be the centre of the movie universe, but an hour’s drive up the coast to sleepy Santa Barbara, fish taquerias, sego palms and surfboards backdrop some noteworthy cinematic delights. Independent theatres screen classic films and contemporary blockbusters on gilded-marquees; a lantern-lit auditorium with Spanish-style balconies and painted bougainvillea still sells real popcorn and $6 matinee tickets.

But perhaps the least known – and most prized – tribute to Tinseltown is a tiny video store tucked away on Mission street. Despite technology’s mightiest efforts to consign rentals to the history books, Santa Barbara’s The Video Shop thrives on a local market that isn’t getting its movie fix from Netflix or Hulu. The store boasts over 22,000 titles, from period pieces to spaghetti westerns to punk rock docudramas. Films are organised by actor and genre, and new titles can be rented for $3.50 (classics are a dollar cheaper, but must return the following day). While the internet’s grip on film culture may have replaced celluloid with streaming, live ushers with automated kiosks, double-features with day-long bingefests, Santa Barbara’s devotion to the silver screen keeps audiences searching for the obscure and the extraordinary.

Rental stores across America have mostly died out – even in Los Angeles, a city with an intrinsic connection to cinema. Thus The Video Shop owner Bill Sanford occupies a unique and precious role within the modern cinema landscape. While an algorithm can suggest movies on cue, digital services will never be able to replicate the thrill of rifling through rare anime or film noir titles, the back-and-forth banter of patrons who have recommendations to share and grievances to air, the singular Sunday-night ritual of pizza and a video. That’s because The Video Shop comes with its own Ferryman to the movie world: a living, breathing, encyclopedic guide who will steer you past rivers of mainstream swill toward the perfect motion-picture story.

I sat down with Sanford at the store on a recent Thursday afternoon. Dressed in his signature plaid kilt, wool vest and wide-brimmed hat, Sanford cuts a formidable figure: his long red hair, baritone voice and numerous tattoos are matched by the store’s interior: floor-to-ceiling shelves of alphabetised disks; life-size replicas of space aliens; autographed movie posters; and a Darth-Vader-esque mask perched atop a vending machine full of candy and soda. Bill’s German shepherd Abby (named for first lady Abigail Adams) even has her own bed behind the counter, where the shop’s manager, Rafael Maryska, frequently mans the fort.

Sanford’s path to shop-owner was a circuitous one. He started in construction and antique car restoration, but the heavy lifting led to back problems; during recovery from an injury, he watched a lot of films. “I used to rent movies here, and started hanging out with Mike [Hansen, The Video Shop’s founder and former owner]. We were becoming friends, and I sometimes helped out around the store by shelving movies. Slowly but surely, I found myself behind the counter.” Sanford won’t say much about how he was able to purchase The Video Shop, except that a generous benefactor lent him the down payment. He officially became the store’s new owner in October, 2015. “I like to look back on that time as my ‘internship’; Mike would buy me lunch.”

When The Video Shop first opened for business in 1979, Betamax was the coin of the realm and Sanford was a kid growing up in Baltimore. His father, a deputy sheriff, worked late hours, but Sanford’s stay-at-home mother instilled a love of cinema in him at an early age. She purchased a VCR so that he could watch movies from the local rental store, and once argued her way into bringing nine-year-old Bill to see Dawn of the Dead, an NC17-rated horror. While his tastes have changed over the years, Sanford says he’s always been particularly fond of British comedies and period pieces (anything with “character and story”), but he also loves comic-based films and documentaries about music, about which he’s especially passionate.

I ask Sanford how his store has managed to survive in a video-on-demand world. “A big part of it is the size of our selection,” he explains, “we have fringe titles, foreign films, odd documentaries, almost all of the Criterion Collection.” But The Video Shop’s popularity might have just as much to do with the energy and enthusiasm of its proprietor, who took care to routinely add new titles that other mom-and-pop stores in the neighbourhood – Captain Video, Video Schmideo and Milpas Video, a Latino-titles only shop – didn’t stock. While those three eventually fell prey to the recession, The Video Shop quietly endured, and regulars kept coming back.

Sanford acknowledges his good fortune, but is hardly Pollyanna about the shelf-life of the format: “I always knew the rental business had a clock on it; my goal was to breathe a few more years of life into a dying piece of American culture.” When I point out that disc-doomsday is a common industry refrain, Sanford looks wistful: “The rental business has been on a downhill slide for a longtime. Streaming services dominate, and most movies are now available in digital formats. I have thousands of niche and fringe titles, though — movies that can’t be found online. Sadly, people have an appetite for mainstream, and streaming caters to that appetite.”

Sanford admits it has been a struggle to compete with the dozens of apps and streaming services available to today’s consumer. At times he’s had to reach into his own pocket to make sure the store stays afloat, but he insists on keeping his prices low and his selection eclectic. Every Tuesday, 10 new titles still arrive by mail, which Sanford – as fluent in box office trivia as he is enthusiastic about the art form – is happy to curate. The store also offers a selection of TV series rentals, disks for sale, and a service that translates VHS tapes to DVDs. A cineaste for our times, Sanford admits to enjoying the occasional series on Netflix. As for movies on the big screen, he still prefers to rent: “I really don’t go to theatres much anymore, because cell phones are always going off.”

To visit the chandeliered hallways and frescoed movie theatres of Santa Barbara is to step back in time: a place more old-Hollywood than Hollywood itself. The city certainly has a long history of filmmaking. In fact, California’s first ever movie studio opened in Santa Barbara in 1910: American Film Company’s ‘Flying A Studios’ was at the time the largest movie studio in the world, releasing nearly one thousand silent films between 1912 and 1921. The city’s Mission-style architecture, sweeping ocean vistas and Santa Ynez mountains have served as set locations for dozens of iconic films, and the Santa Barbara International Film Festival, held each year at the downtown Arlington Theater, generates almost as much buzz as Sundance or Telluride.

During the festival, the Riviera Theater, a building with expansive views of the Pacific, showcases foreign films and low-budget independent productions. Movies are shown on Dolby-vision grade film, which use laser-illuminated images for crisp colours and deep, deep blacks. In the summer months, old James Bond flicks are projected on the side of the Santa Barbara courthouse wall while moviegoers sit on blankets and sip wine with their picnics.

Most of us think of renting a movie as a quaintly analog activity, right up there with mixed-tapes and snail-mail. But Sanford’s Video Shop speaks to the persistent cultural pull of borrowing a handpicked story and then giving it back. “There’s nothing wrong with having both options [renting and streaming],” he explains, “but it doesn’t hurt to get out and support your local business. I’ll be here when you want that odd documentary or foreign film or Oscar winning picture.”

At this point Sanford’s tone shifts, and he seems to be grappling with something weighty: our nostalgia for the past, maybe, or the shared collective experiences that movies themselves are meant to capture and preserve. “Movies are healing. They are the most modern form of storytelling we have. Some of my customers are kind of lonely people, and I can tell that this place is really important to them. Movies help people from being afraid of the dark out there.”

The Video Shop is located at 128 West Mission Street in Santa Barbara, California. You can donate to store here.