Linda Hamilton’s return in Dark Fate reminds us why her complex heroine is so vital to the series. 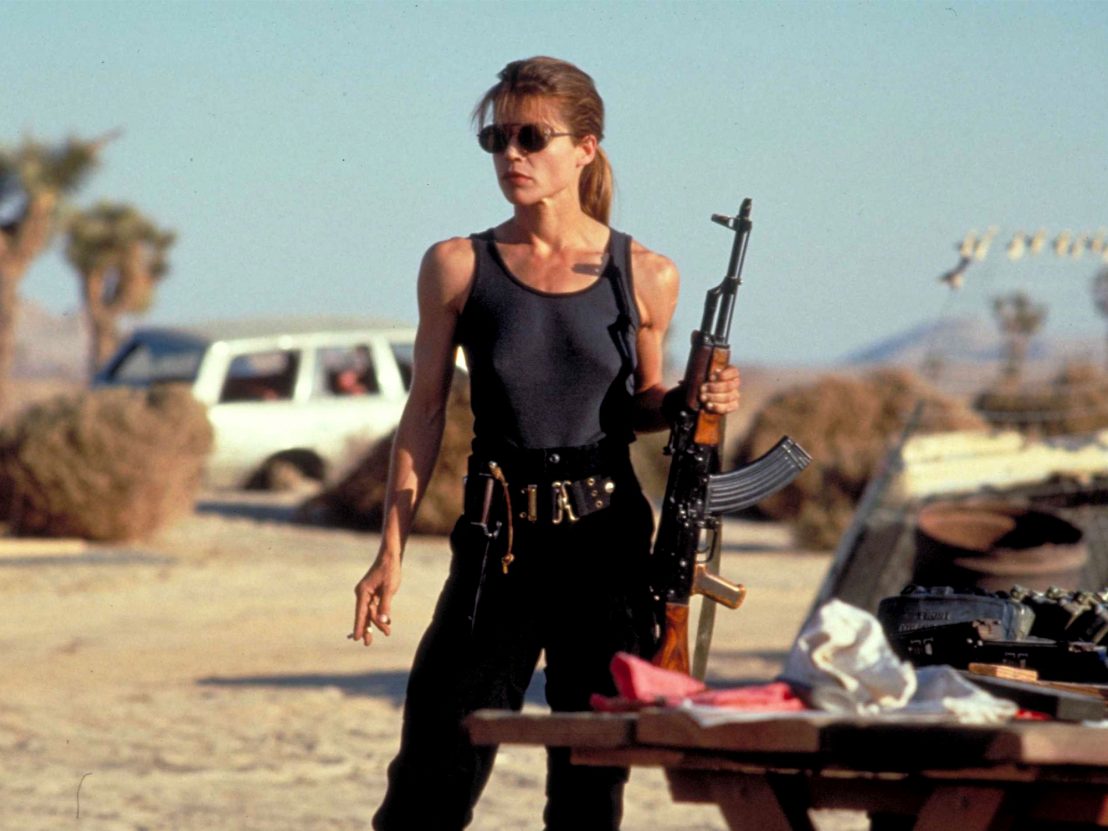 When Terminator 2: Judgment Day arrived in cinemas in the summer of 1991, a whole seven years after the first film, the T-800’s shift from bad guy to good guy instantly became one of the most talked-about twists of the decade. But Arnie was not the only one to undergo a dramatic transformation. At the heart of both James Cameron’s original film and its action-packed sequel is lead heroine Sarah Connor, as played by Linda Hamilton, whose remarkable arc continues to evolve in this year’s Dark Fate.

When we first meet Sarah Connor in 1984’s The Terminator, she’s a timid waitress confronted with a truth so strange and bleak that most people would choose not to believe it. Yet rather than shy away from the horror and uncertainty of her situation, Sarah does what she needs to – first for self-preservation, then out of a sense of duty to her future self, her unborn son, and the rest of humanity.

Early signs of self-sufficiency and level-headedness reveal an inner strength that Sarah must rely on later in the film, as others try to convince her that she’s been misled or that they know what to do next. She listens, she learns, she weighs everything up – and then she does what she thinks is best. Despite her apparent uncertainty and vulnerability, Sarah trusts her instincts. It’s that intuition which makes her eventually change her mind about trusting Kyle Reese (Michael Biehn) after initially being frightened of him.

Throughout The Terminator and Judgement Day, Cameron and Hamilton remind us how very human this woman is. She is visibly distraught when she learns of the murder of her close friend, appears terrified when she thinks she’s been kidnapped, and is angry when people don’t listen to her. Sarah is only brave when she needs to be. She is, after all, an ordinary woman – so it comes as a genuine surprise when we rejoin her in Judgment Day only to find that she is now a fearsome force of nature.

The second film opens with Sarah explaining in a weary voiceover how “three billion human lives ended on August 9th, 1997”. We immediately sense that this version of Sarah Connor is hardened, clinical, dispassionate – more machine-like. When we actually see this older Sarah, she is in peak physical condition, doing chin-ups from her secure cell in a psychiatric hospital. When she escapes from the facility with her son and the now reprogrammed T-800, she tells John, “I didn’t need your help. I can take care of myself.” She’s not wrong.

This Sarah is smart and resourceful. The life she once knew is a distant memory; she now only exists to keep her son safe. Everything else is irrelevant, which is why she has put so many plans and back-up plans into motion, spending years making useful contacts and looking for ways to gain the tactical advantage over the foe she knows will one day come for her.

Yet Sarah’s strength doesn’t just lie in her newly acquired skillset. She’s so determined to change the future that she goes to the extreme lengths of attempting to murder the man she holds responsible, only to then be overcome with her own all too Terminator-like behaviour. She is a deeply layered character, with a clear backstory, motivation and real, often conflicting emotions. Beneath all that steely pragmatism and determination is a desperate woman plagued by nightmares, living in fear of her own destiny. There’s even a hint of hope in her closing voiceover, even as she acknowledges the “unknown future” still facing humankind.

In Terminator: Dark Fate, it’s Sarah who kicks things off once more, first in a throwback to Judgment Day and then in a voiceover in which she talks about the future that once was – the future she prevented. This Sarah is tired but cannot rest because there are still Terminators to be destroyed. She’s developed a dry sense of humour, is often quick-witted and has no time for your bullshit.

In protecting Dani (Natalia Reyes), she finds a renewed sense of purpose. Because she was once that woman being hunted, and there’s no way she’s letting everything she went through be for nothing. As the bond between these women develops, we begin to recognise something of the younger Sarah in Dani – namely her raw emotion and courage – and this in turn is reflected back in the now much older Sarah, making her dramatic development across all three films even more pronounced.

Over the course of 35 years, Sarah Connor witnesses all manner of tragic events but she is not written to be a tragic, sad woman. In the first film she says, “I didn’t ask for this honour and I don’t want it.” But by the time we reach the end of Dark Fate, we understand the extent to which this honour shaped her into one of the most complex and interesting female characters in film history.