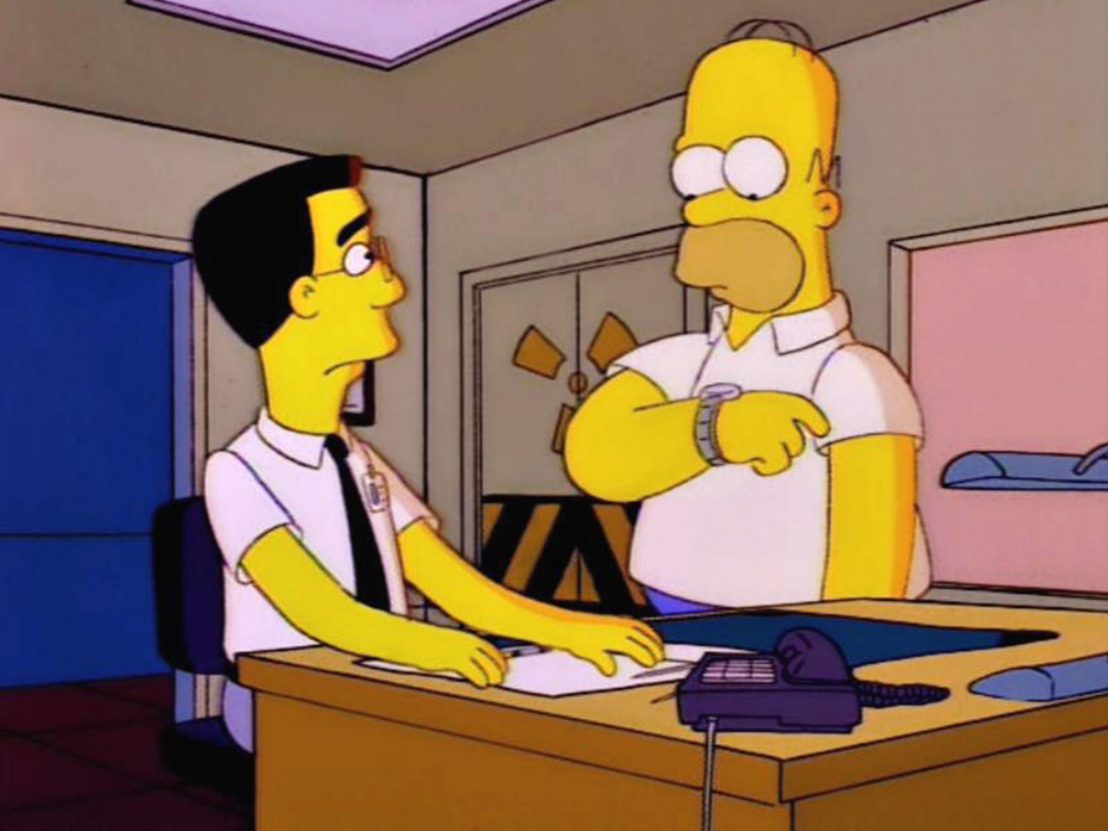 By 1997 The Simpsons was the biggest show on television. The weekly antics of Homer, Marge, Bart, Lisa and Maggie consistently provided hilarious takes on the modern family and drew in an audience of millions. By now the creators had the freedom to explore new directions and introduce bold ideas and in season eight director Jim Reardon and writer John Swartzwelder introduced a character who shone a very dark and pessimistic light upon Springfield.

Frank Grimes is a man who has experienced hardships throughout his life. Abandoned as a child, he didn’t go to school and was forced into work at a very young age. After being caught up in a freak accident, Frank began to educate himself and eventually earned a degree in the advanced field of nuclear physics. After his heartwarming story is featured in a news segment, Mr Burns recruits the downtrodden Grimes and gives him a job at his power plant, only to forget about him within his first week.

Drawn to resemble Michael Douglas in the 1993 film Falling Down, Grimes does not suffer fools lightly. Initially, he tries to coexist with Homer despite him eating his special dietary lunch and ruining his personally engraved pencils. Shocked by Homer’s ignorance, selfishness and brazen lack of professionalism, Grimes confides in his co-workers, Lenny and Carl, only to find that they, like everyone else in Springfield, take no issue with Homer and his obvious flaws.

In the history of The Simpsons up to this point, this is the strongest critique of Homer. Despite his incompetent, insensitive and idiotic nature, Homer never gets his comeuppance: Marge never leaves him when one of his hair-brained schemes goes wrong; Lisa still loves him no matter how many times he lets her down; Ned Flanders constantly trusts him even though he is a terrible neighbour; and Mr Burns never sacks him because he simply cannot remember his name. All of these factors, combined with his cushy, well-paid job, have allowed Homer to coast through life and reap the benefits. Frank is his polar opposite, a decent hard-working man who has got nothing to show for his years of struggle.

An already edgy Frank hits his breaking point after Homer accidentally causes Burns to demote him. In a state of rage, he admonishes Homer and declares that the two are now enemies. A visibly shaken Homer attempts to appease the situation by inviting his unrequited nemesis to dinner but that does not go to plan. Upon arriving at the Simpson residence, Frank is overwhelmed by the size of their home and Homer’s various life achievements, from winning a Grammy to travelling to outer space and meeting President Gerald Ford. He lambasts Homer in front of his family and declares him everything that is wrong with America.

Hidden in this very funny observation of the amazing life that Homer leads is a damning comment on late 20th century America. A society in which the wealthy are sheltered from the everyday concerns of those less fortunate than them. In turn, those lower down the social ladder only become more disenfranchised when exposed to how the other half live. Homer doesn’t mean to offend Frank but he cannot help be insulted by these gestures, which to him are a form of gloating insincerity. Even a seemingly harmless subplot which sees Bart acquire a derelict factory feels like a jibe at Frank’s expense.

Hank Azaria, who voiced Frank, is said to have based the role on the actor William H Macy, who is best known for playing hard-working characters who just can’t catch a break. His performance conveys the frustration and anger that Macy often brings to his roles while exuding a level of energy and emotion unlike anything seen before on the show. In later interviews and on DVD commentaries, Azaria admitted that the role required the most effort, preparation and execution he had ever put into a single episode. His career-best performance paid dividends as the episode is one of The Simpsons’ very best.

While attempting to expose Homer’s profound stupidity, Grimes meets his untimely, grisly demise. But rather than show him respect, Homer inadvertently gets the last laugh – much to everyone else’s amusement. It’s a brave, downbeat ending that forces the viewer to question whether to revel in Homer’s bad manners or find sympathy for Frank. There’s a broader inference here too: should we live our lives blissfully unaware of the troubles around us or should we try to make the world a better place for everyone?