Robert Altman’s That Cold Day in the Park is now available on Blu-ray and DVD. 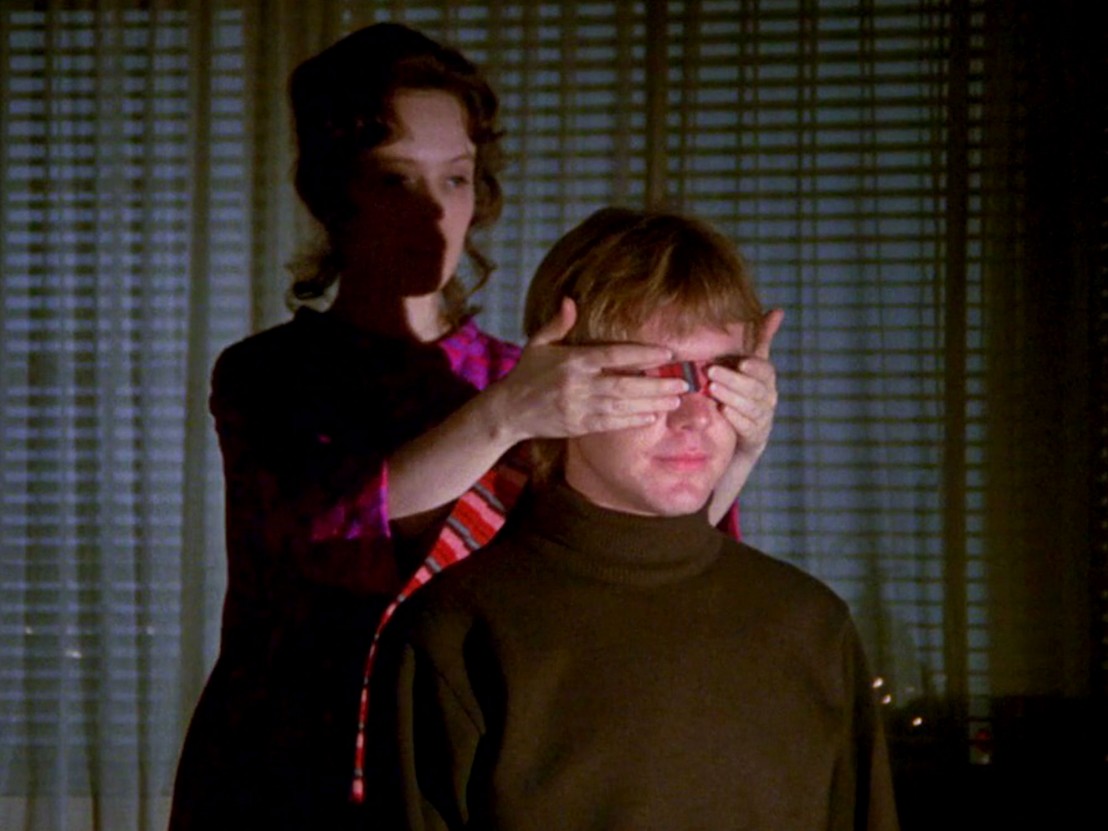 On that cold day in the park in Vancouver, well-dressed Frances Austen (Sandy Dennis) passes a bench where an unnamed Boy (Michael Burns) sits and shivers. Frances is on her way to her parkside apartment, where she’s preparing to host a formal dinner party – but as the soirée starts, and the rains starts to fall outside, Frances is drawn to the window to look out at the Boy, huddled and drenched in the downpour.

Yet no matter how freezing it is outside, there is also a frigidity within – whether it’s the old-world furnishings (including a portrait of Queen Elizabeth on the wall), or the sheer number of internal screens and doors (a sure signifier of repression), or the advanced years of the guests. Thirtysomething Frances lost her youth to caring for her ailing, senile mother. Since her death she has remained in her childhood home, alone, arrested, and trapped in a closed circuit of dinner evenings, bridge parties and lawn bowls competitions with her mostly geriatric companions. Her only suitor, the much older Dr Charles Stevenson (Edward Greenhalgh), repulses her.

So the boy – rootless, unprotected but also uncloistered – embodies what Frances has been missing all this time. When, after the party is over, she heads downstairs and invites him in out of the cold, Frances becomes noticeably agitated and giddy, like a little girl who has acquired a new toy for her doll’s house. The boy remains mute and gives little away. “You must think,” she tells him, “that I’m a compulsive talker, but it just seems so odd to sit here in silence not saying anything with you.” And so Frances not only fills in the silences, but is also able to project onto this blank, angelic-looking canvas whatever fantasies she likes. Her babbling, one-sided conversations with him are like a session in the psychiatrist’s chair, gradually revealing the strange workings of her mind. As the boy stays on, at first happily but then increasingly trapped against his will in the same cage as his over-accommodating host, the psychodrama that emerges shows a woman lost in the cracks between the staid bourgeois respectability of her mother’s generation, and the new freedoms of the ’60s.

Adapted by Gillian Freeman from Richard Miles’ Paris-set 1965 novel, That Cold Day in the Park is the second feature by Robert Altman – although he had been directing TV shows for decades, and his experience shows through. Some of the key elements of Altman’s work are already in evidence here. The sensitive interest in female psychology, which the director later explored in 1972’s Images and 1977’s 3 Women, is present and correct, while a scene in the waiting room of a family planning clinic exhibits the overlapping snatches of background dialogue that would become a trademark of his subsequent films’ soundscapes.

Overheard in this room, the frank and unflinching discussion of pre-marital sex, and of the efficacy of the various available contraceptive methods, would, in its time, have been no less audacious than Whoopi Goldberg twirling an unpackaged tampon by its string in 1992’s The Player, or the casually lengthy shots of Huey Lewis and Julianne Moore’s genitalia in 1993’s Short Cuts. Flirtations with incest between the boy and his free-living, free-loving sister Nina (Susanne Benton) are even more overtly taboo-busting.

“She’s got a very strange attitude towards sex,” the boy tells Nina. “She makes a big deal out of it.” Frances’ belated introduction to the sex, drugs and rock ’n’ roll that characterised her era ultimately brings tragedy to herself and others – for while the Summer of Love liberated some, it had a chilling effect on those whose very ways it was outmoding. The film failed to impress critics on release, but is now ripe for reassessment for the way it explores the shifting boundaries between age, class and gender in a period of great social upheaval. Frances’ attempts to narrow these gaps only widens them, as Dennis, in an extraordinarily restrained performance of madness, carries us along with her as captives, trapped inside and longing to escape to the more bracing reality outside.

That Cold Day in the Park is released in a new Dual-Format edition (Blu-ray and DVD) as part of Eureka!’s Masters of Cinema Series on 20 June.