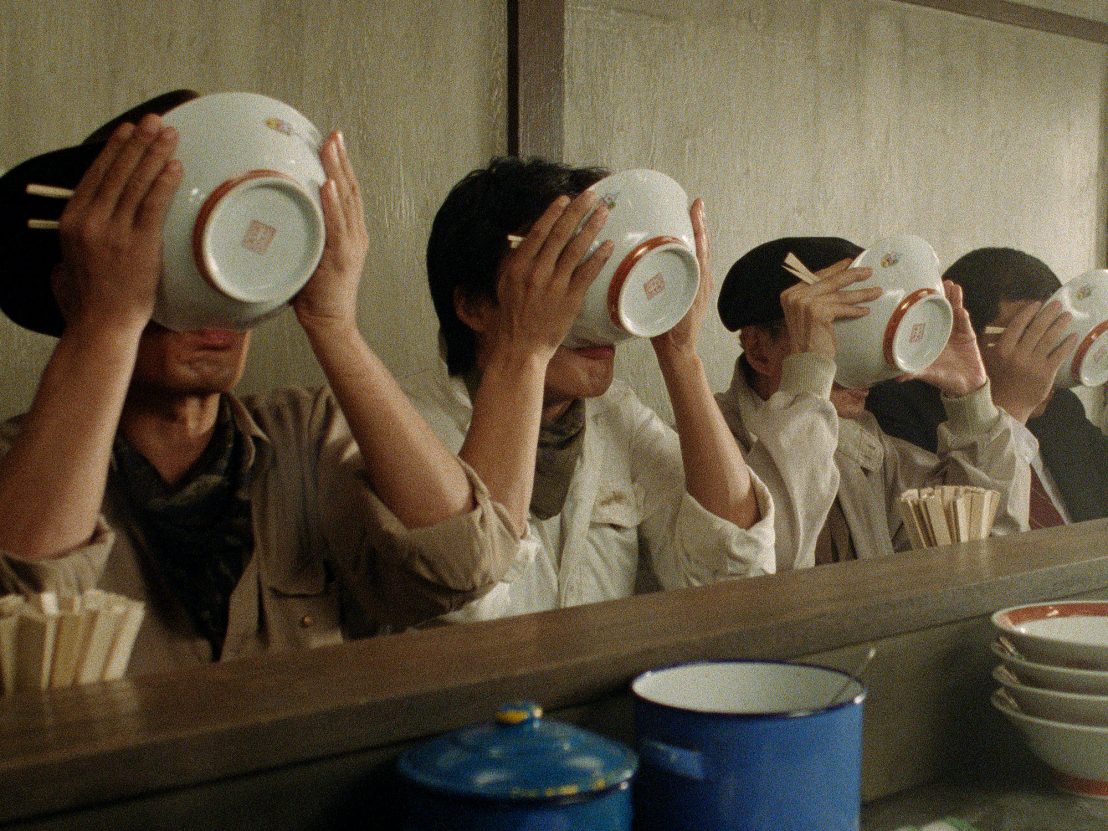 Today the label ‘ramen western’ evokes such films as Takashi Miike’s Sukiyaki Western Django, Sadik Ahmed’s The Last Thakur and Kim Jee-woon’s The Good the Bad and the Weird, which reclaim and renationalise what the spaghetti western had originally borrowed from Akira Kurosawa’s Seven Samurai and Yojimbo.

Yet before all these post-modern, post-millennial, pan-Asian retakes on the western, there was Juzo Itami’s comic smorgasbord, Tampopo, an all-consuming artefact which, while certainly peppered with references to the oater genre, mixes in all manner of other ingredients from different genres to achieve its rich, full and balanced flavour.

“You’re at the movies too, huh?” says a white-suited yakuza (Koji Yakusho) directly into the camera as he takes his seat in the front row of a cinema at the beginning of Tampopo. Both the theatrical setting, and the yakuza’s irrational breach of the fourth wall, immediately establish the film as a metacinematic hall of mirrors. Indeed, what follows comprises a parodic pastiche of elements taken from the oater, the gangster flick, martial arts movies, classic melodrama and even Chaplinesque silent comedy. But the yakuza’s next words (uttered as he and his mole are served a luxury meal in the cinema by two personal waiters) introduce the central theme which binds all the film’s disparate parts together: “Watcha eating?”

In Tampopo, every aspect of life is filtered through the prism of food – its rituals of preparation and consumption, its role as a social unifier or divider, its many healthy uses and perverse abuses. As Stetson-wearing truck driver Goro (Tsutomo Yamazaki) and his significantly named sidekick Gun (Ken Watanabe) enter a shabby commuter-belt noodle bar whose rough customers, as though in a western, immediately turn and stare in silence at the new arrivals, they discover that the ramen soup made by “middle-aged and frumpy” widow Tampopo (Nobuko Miyamoto) is decidedly subpar.

Goro, himself a divorcé and something of a drifter, agrees to stay on and help Tampopo hone her craft and take on the local competition. And so he assembles a magnificent team of culinary black belts to transform both Tampopo and her business.

Part of the joke here is that all Tampopo’s rigorous physical and mental training under a range of sensei is in the service of perfecting a dish available on every street corner in Japan and rarely deemed a gourmet’s specialty. The care and love and discipline that goes into that process is everything, and far more valuable than the final product. As Goro divides the specific makeover duties among his team, he reserves for himself and Gun the more general task of giving the shop some flair, declaring, “We’ll be like the directors of the film.”

Itami’s own job is similar to theirs, overseeing an ensemble cast and crew in their efforts to focus on a topic as banal, broad and breathtaking as food. And just as they spice up Tampopo’s fare with some unexpected touches, Itami regularly interrupts the main narrative with hilariously piquant vignettes which connect the art of eating to class, race, sex and death. These incidental episodes are in many ways the best parts of the film, but they also prove the perfect complement to the main course.

Everything here is dedicated to the pure indulgent joy of consumption, culminating in a simple yet taboo shot, running right through the film’s final credits, which depicts a baby suckling on its mother’s breast. This is Freudian food for thought, with Tampopo (both the character and the film) the ultimate nourishing mother, and all of us happily devouring what she so generously offers, and wishing for more.

Tampopo is available on Blu-ray now courtesy of the Criterion Collection.