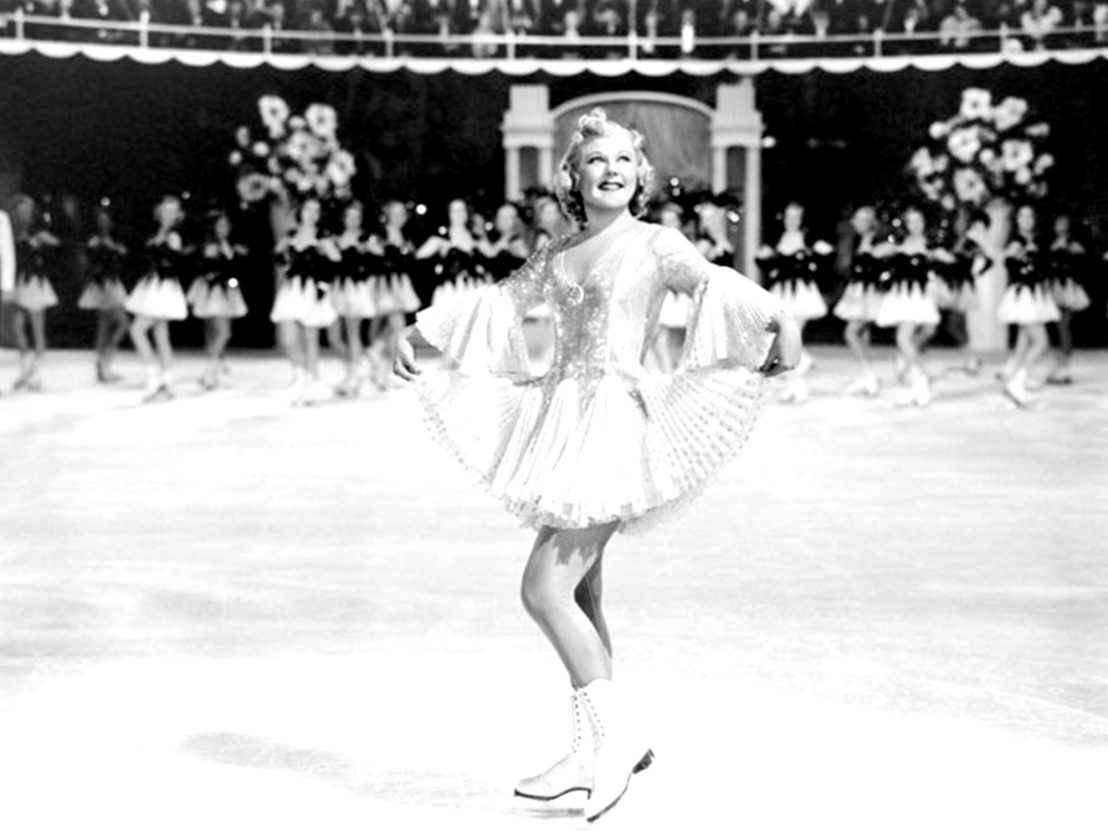 Under the watch of Adolf Hitler and an international crowd, Sonja Henie was competing for her third gold medal in figure skating at the 1936 Olympic Games. She had just signed a contract at 20th Century Fox, and after these Games she retired to focus on a career in film. Going into the final skate, Henie was just three points ahead of Cecilia Colledge, a 15-year-old skater from London. Outraged by such a narrow lead, observers noted that “Henie ripped the posted scores off the wall and tore them to shreds.” But in the final round Henie delivered a near-perfect routine, winning the gold medal and a standing ovation. It was the defining moment of her life, one that came to haunt her less than a decade later.

Back in Hollywood, Henie was preparing for her debut performance in One in a Million, a vaguely autobiographical ice skating musical about a theatre manager (Adolph Menjou) who discovers Henie competing at the St Moritz Olympics in Switzerland (where she claimed her second gold medal). He brings her to America to perform at Madison Square Gardens in front of a sell-out crowd, mirroring her real-life discovery a couple of years earlier.

Gossip columnists were swooning over Henie even before seeing the film, describing her as “a Degas ballerina on skates.” Not unlike Hitler, who admired Henie for upholding an Aryan ideal, they gushed about “her natural blondness and dimples and dazzling Norwegian smile.” She became Hollywood’s first (and only) skating superstar. One in a Million is a slight but charming film that showcases Heni’s natural charisma. Long before the era of easily accessible sports broadcasting, it allowed the American public to witness a world-class skater performing at the peak of her powers. The film was a huge hit.

To this day, Henie remains the most successful female athlete ever to cross over to the silver screen. She went on to make a string of successful films, enabling her to stay in America and avoid the encroaching war in Europe. The best of these films is Sun Valley Serenade from 1941, a somewhat convoluted story set at the Sun Valley Lodge which boasts some of the most stunning musical sequences ever committed to film.

In a faux-outdoor rink, director H Bruce Humberstone and cinematographer Edward Cronjager decided to cover the surface in black ink to reflects the skater’s movements like an onyx mirror. With choreography by Hermes Pan, best known for his work with Fred Astaire and Ginger Rogers in films like Top Hat, Swing Time and Shall We Dance, the skaters move across the screen with grace and sophistication. Where the camera is somewhat timid in One in a Million, here the cinematography is at once intimate and expansive.

Soon, however, Henie’s career was in decline. Writing about the 1943 film Wintertime for the New York Times, Bosley Crowther described Henie’s recent acting gigs as suffering from an “almost insufferable monotony of pattern and style.” Henie had been a hero in her native Norway, but was now coming under heavy criticism at home. Not only was she accused of hiding in America, but rumours began to circulate about her alleged sympathies with Nazi Germany. After the 1936 Olympics, Henie is said to have become an acquaintance of Hitler, and it should be noted that it wasn’t until Pearl Harbour that she publicly condemned him. Even when she joined other Hollywood stars in raising money for bonds, she failed to voice her support for the Norwegian resistance. Although her cars and dog were stolen during the occupation, her house was left untouched, leading many to suspect that Hitler was protecting her assets and family.

By 1945, Henie’s film career was all but over, but she continued to perform for large crowds as part of the ‘Hollywood Ice Revue’ for another decade. At the height of her skating career she was earning over $2 million a year and by the time of her death in 1969 she was worth an estimated $45 million. In 1977 Henie was voted the all-time greatest ice skater by an international panel. Her impact on skating should be measured not only in terms of the accolades she received but in the way she broke down class barriers by introducing the sport to a wider audience.