Unwrap the yuletide thrills of this controversial Santa slasher 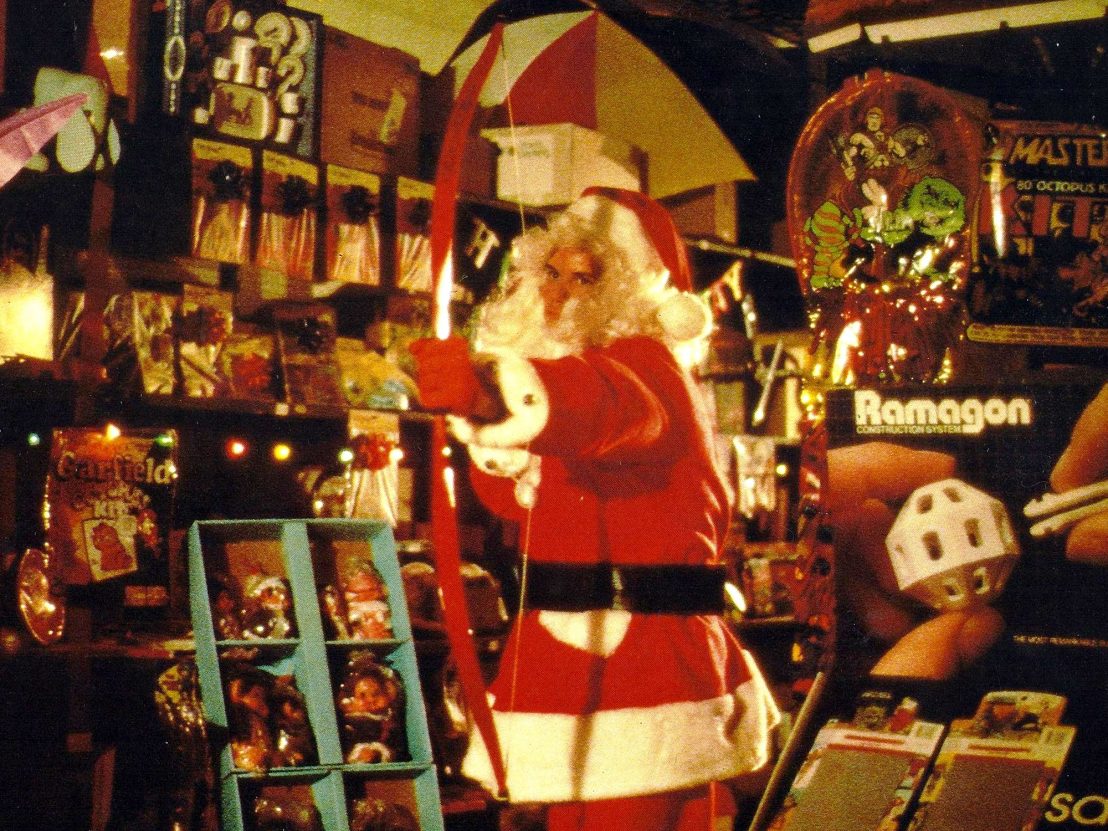 “Everything he’s been doing has a kind of logic to it – once you understand what he’s gone through.” So says Sister Margaret (Gilmer McCormick) of her former ward Billy Chapman (Robert Brian Wilson), who, towards the end of Charles E Sellier Jr’s Silent Night, Deadly Night, has embarked on a crazed killing spree while dressed as Santa Claus. The concerned nun is absolutely right.

For while Sellier’s debut feature is certainly a slasher, its central killer is much closer to the antagonists of Joseph Ellison’s Don’t Go in the House, William Lustig’s Maniac and especially Lewis Jackson’s Christmas Evil – fleshed-out individuals whose carefully detailed histories of psychological damage can be traced back to Alfred Hitchcock’s ur-slasher Psycho – than to the heavy-breathing masked cyphers who populated the Halloween and Friday the 13th franchises.

Billy may eventually be reduced to a slash-happy murderer concealing his identity behind a white beard and red suit, even as the panting and wheezing that typically herald a slasher’s advent are here replaced with a tinkling bell and manic cries of “Punish!” and “Naughty!”, but much of the film is focused on the making of this murderer, as a series of harrowing scenes trace a nice little boy’s driven journey towards a very messed-up adulthood.

The film opens on Christmas Eve, 1971, as five-year-old Billy (Jonathan Best), who would like nothing more than to be home waiting for Santa’s arrival down the chimney, is instead being dragged with his infant brother Ricky on the long drive to visit their grandfather (Will Hare) at the Utah Mental Facility. Grandpa delivers a classic Old Man’s Warning™ to Billy about Christmas Eve being “the scariest damned night of the year” because it is when Santa punishes the naughty. “You see Santa Claus tonight, you better run boy! You better run for your life!”, Grandpa cackles.

It is a weirdly overdetermined scene: we know that Grandpa is mentally ill; and the fact that only Billy hears this supposedly catatonic patient might be regarded as a hint that madness may run in the family (and skip a generation). Yet as it happens, Grandpa’s warning, whether real or merely imagined, will quickly prove true. For on the drive back, an armed criminal dressed as Santa will shoot Billy’s dad dead, and then cut his mother’s throat after attempting to rape her, all before the terrified Billy’s eyes.

Three years later, in 1974, eight-year-old Billy (Danny Wagner) is in Saint Mary’s Home for Orphaned Children with his brother Ricky. Where Sister Margaret can see the trauma with which disturbed Billy is still living – a nightmare of confusion and anxiety that only intensifies around Christmas each year – the Mother Superior (Lilyan Chauvin) believes that Billy’s problems can be resolved with harsh punishment and discipline. At the Orphanage, Billy has a classic Freudian ‘primal scene’ – watching through a keyhole as a couple has sex, and then seeing the Mother Superior physically punish them for their transgression with her belt, and him for watching.

“Punishment is absolute, punishment is necessary, punishment is good,” she explains to Billy before beating him – and she beats him again after he reacts adversely to being forced to sit on a visiting Santa’s lap. Where Billy obviously needs help, all he gets is the rod, while being indoctrinated into an uncompromisingly harsh worldview of sin and retribution. 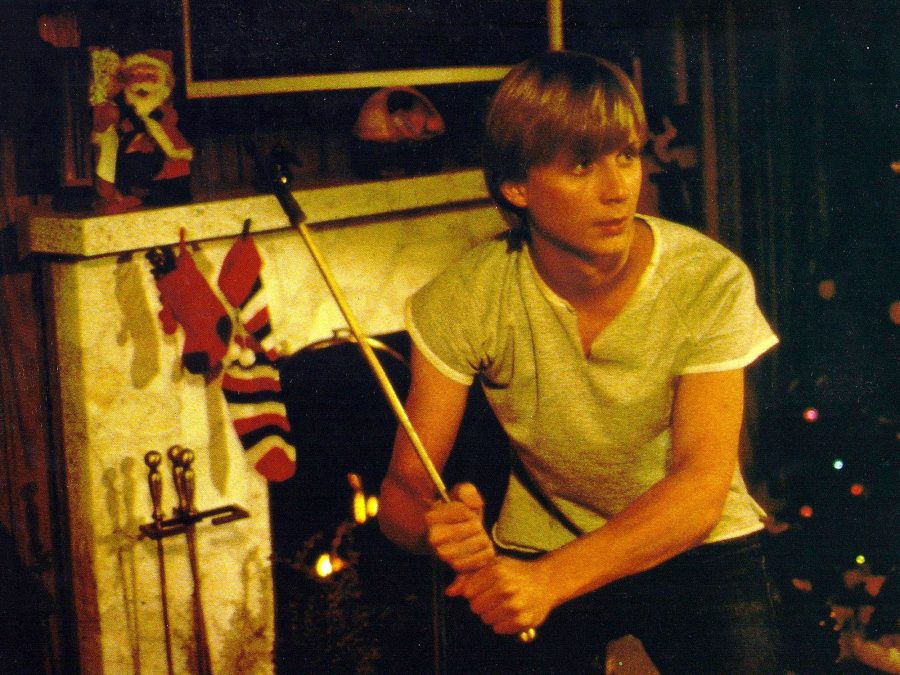 Cut to 1984, and Sister Margaret secures a job for the now adult Billy working in the stockroom of Mr Sim’s toy store. Billy is a gentle giant – a muscle-bound, fresh-faced, hard-working, courteous, clean-living teetotaller – and fits in well in his new environment. But come Christmas Eve, when he is pressured both to drink spirits and to don the store’s Santa costume, and when he witnesses one of his colleagues attempting drunkenly to rape another in the backroom, something inside him cracks, and the killing begins. At first he targets his workmates, and then random strangers, before finally heading back to the Orphanage and a confrontation with the Mother Superior.

Billy’s descent into madness is just that: a slow decline whose several stages we are shown, so that he is a slasher whom, as Sister Margaret suggests, we can understand, and even with whom we can sympathise. He is both an ill-fated victim and a ticking time bomb, and if his eventual explosion delivers all the by-numbers cat and mouse and multitool culling that is expected of the slasher subgenre, it is his personal psychodrama which keeps us engaged with what is as much a human tragedy as a succession of sensational thrills.

When ads for Silent Night, Deadly Night were shown on American prime-time television, parents complained to the TV networks and the film’s distributor TriStar Pictures that its imagery was making their children terrified of Santa Claus. Soon there were protests (and carol singing) outside theatres, with critics who disliked the film happily adding to the moral outrage. All this led to the ads being pulled six days after the film’s mid-November release, and the film itself being withdrawn from cinemas shortly afterwards.

It is one of those strange ironies of life reflecting art. If parents were concerned by the negative impact that the film might have on their children’s perception of Christmas, the film itself is preoccupied precisely with this issue. Not only do we witness Billy’s initial love of Santa Claus being soured and perverted by awful circumstance, but we also see him, in his Santa guise, transmitting that same fear to an alarmed little girl on his lap, while in another scene, a young boy is forever disillusioned of his belief in Santa when police burst into his bedroom with guns drawn, forcing the Santa who has just climbed in the window to reveal that he is in fact the boy’s father.

As both the old man who likes little children to sit on his knee, and as the mythic figure who divides young boys and girls into simplistic categories of ‘naughty’ and ‘nice’, Saint Nick has always come with an iconography that is at best double-edged, while his connection to cynical commerce has never been in doubt. Silent Night, Deadly Night plays on all these ideas, merely revealing a darker side of Santa that was already, always there from the start, while also dressing its killer in a costume that makes his own malicious intent impossible to distinguish from the nicer motives of all the other Santas out on Christmas Eve.

Ricky has already gone on one killing spree, and will soon escape to kill again, but unlike his bigger brother Billy, Ricky murders in ways that have little connection to Christmas (until the very final scenes), and takes far greater pleasure in the process, ensuring that there is a smirking, semi-comic glee to the sadism of the film’s massacres.

The best thing about this sequel is the scene where Ricky settles in with his girlfriend Jennifer (Elizabeth Kaitan) to watch a film at the theatre, only for it to be revealed that the film in question is, impossibly, Charles E Sellier, Jr’s Silent Night, Deadly Night (near half of which we have already seen in Ricky’s flashback). Remember that this was over half a decade before Wes Craven’s New Nightmare and especially his Scream would suddenly popularise postmodern self-conscious reflexivity in horror, ensuring its dominance in the late Nineties genre scene.

When a character seated in the theatre’s back row takes it upon himself to give an obnoxiously loud running commentary on the perceived failings of Silent Night, Deadly Night, he will end up brutally punished for his crimes against cinema, as horror, through Ricky, takes its revenge not only against naughty breachers of filmgoing etiquette, but also against blowhard critics. Of course, everything Ricky does in this scene has a kind of logic to it – for who among the audience of Silent Night, Deadly Night Part 2 does not understand, and will not sympathise with, what he has had to endure from this backseat loud mouth? 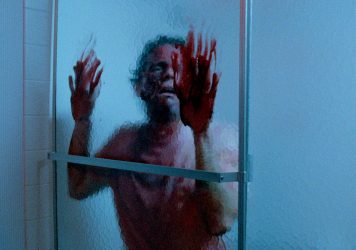