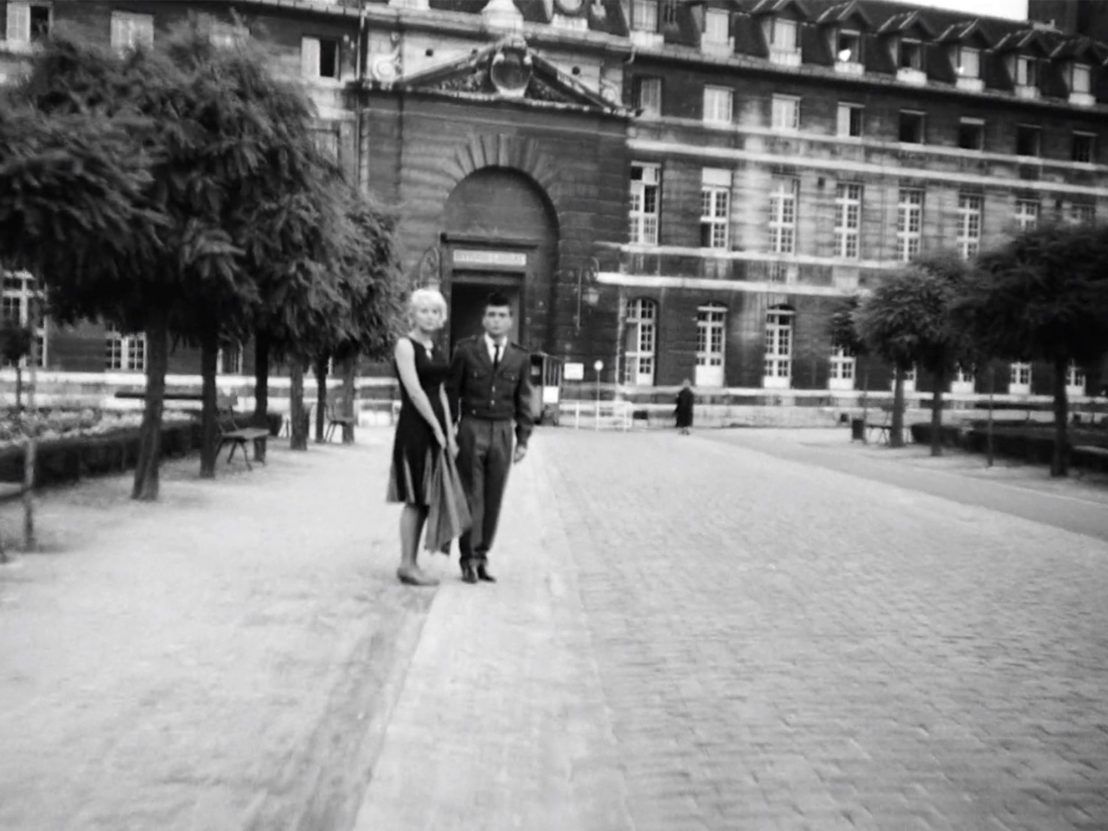 Cléo from 5 to 7 is a wandering film, a melancholic city odyssey through Parisian streets. In her second feature, Agnès Varda shows her understanding of Paris to be better than most of her equally cosmopolitan contemporaries, filming a journey through some of the capital’s most picturesque and unique urban landscapes. Shooting in the streets and buildings of the Left Bank, Varda achieved a level of authenticity that is difficult to match. With such authenticity comes a multitude of possible pleasures for the film location enthusiast, with almost every frame of the film presenting a potential visit or wander.

Varda’s film follows a day, or more precisely two hours, in the life of Cléo (Corinne Marchand), a famous singer plagued by paranoia over an impending biopsy result. Her worry drives her to wander and explore Paris, sometimes forgetting her problems via friends and chance meetings, sometimes overcome with anxiety over what a potential illness could mean to her as a singer and as a woman. Cléo is, on this day, forced live with chance rather than the accustomed control over which she is clearly used to exerting. Varda’s film is essentially an anxiety map of its lead character, in which the long way round is taken to get a simple answer.

As much as being a narrative film, Cléo from 5 to 7 is a cartographic document. The strength of the film comes from the veracity with which Varda captures the journey at the film’s core. Paris is not fragmented but almost recreated from reality, showcasing genuine haunts and realms from the period’s art scene in a way only someone totally immersed in it could have known. Being shot in this way, and with the screen filled almost constantly with images of Parisian walkways, buildings and streets, a full walk of the film is entirely possible, so long as its occasional taxi journey and bus ride is taken into account. Whether we would see the same city as Cléo does with her newly acquired, morbid gaze, however, is another question.

With so many potential locations to choose to visit, it was a difficult choice to find one that summarises the whole film: how can a film explicitly about journeying be contained within one image? The closest answer I found was in a scene in the film’s finale, in which the thoughts haunting the film come to a strange, corporeal anti-climax in the wittiest of Varda-esque visuals. Cléo, along with the local soldier (Antoine Bourseiller) she has picked up as a wandering companion, finally go to the hospital to get her results.

They meet the doctor (Robert Postec) driving along the road just in time, casually giving the diagnosis out of the window before departing, leaving the pair staring in amazement. But what are they watching as the shot moves off with the camera: their fears drifting away, the waste of time of the last two hours, the hope of a city seen anew? 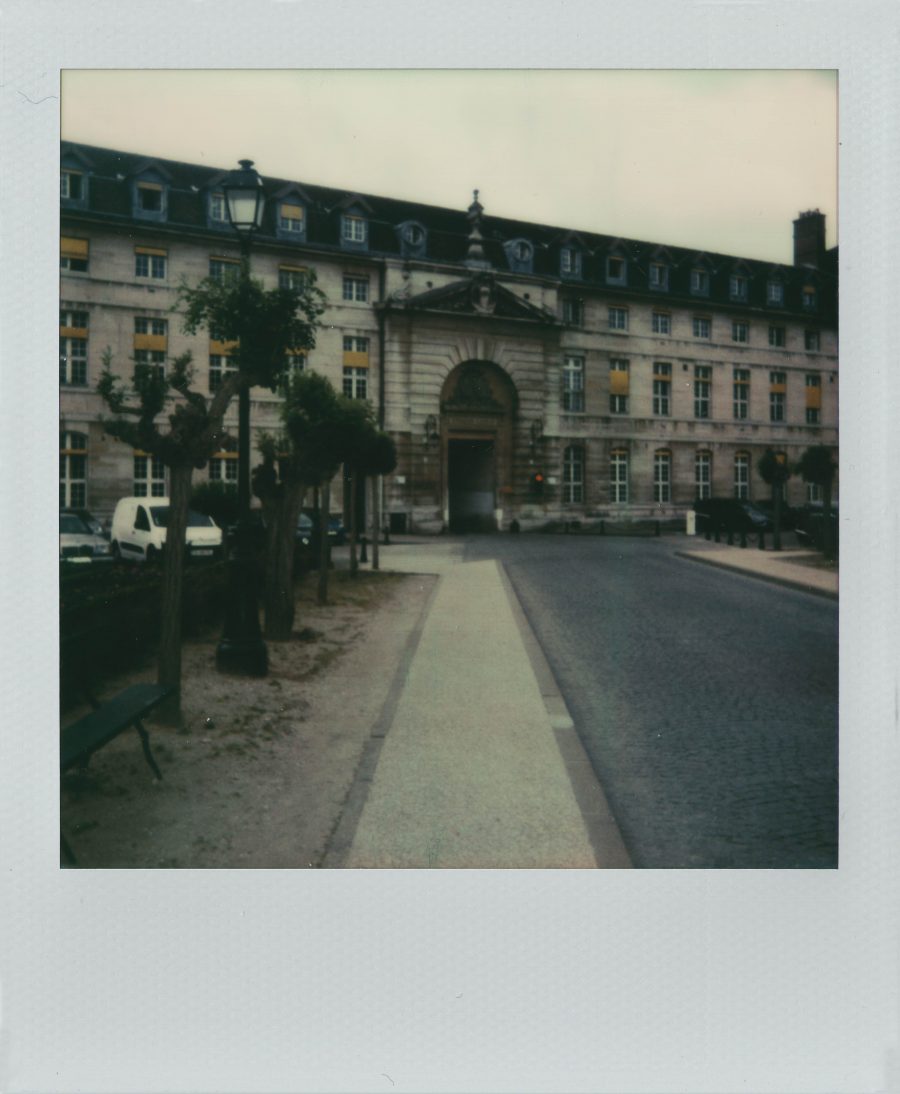 The shot in question, in which Varda quite literally drives the camera away from the pair, is one of the arching, cobbled roads outside of the Cours Saint-Louis, the road leading to the famous l’Hôpital Universitaire Pitié-Salpêtrière. Though originally starting out as a factory for gunpowder, it became a hospice for poor women, and in particular a prison for prostitutes. The building is equally famed for its Catholic chapel, the St Louis Chapel of the Salpêtrière commissioned by Louis XIV and designed by the architect of Les Invalides.

Now one of Paris’ most successful teaching hospitals, Cléo was in fine company in being one of its attendees. Michael Foucault and Lady Diana died there, whilst the hospital is generally known for its famous patients including Alain Delon and Gérard Depardieu.

The location is interesting in the film as it really is its endpoint. Even if the film went on wandering, which would be an equally Varda-esque thing to do, this would still be turning point, the peak. For the meander we’ve seen throughout the whole film has been an avoidance of this place and what it represents for the character. This location has coloured the film emotionally, ironically dragging it into black-and-white.

When Varda zooms that camera shot away in the doctor’s car, it is a telling gesture; a nod to the paranoia of the film but also an acknowledgement of its serendipity, the joy of a journey unplanned. As Lauren Elkin observes in her beautiful assessment of the film in her book ’Flâneuse’, “The car pulls away and the camera with it: Cléo’s shock rendered in movement, a quick back zoom travelling. Travelling shots for a travelling director.”

The film was shot on the spring equinox of 1961 and was certainly a nicer day than my wintery visit. Walking along Boulevard de l’Hôpital and trying to avoid the street sweeping cars which drive at unusually fast speeds along the pavements, I eventually came to the gates of the hospital. The railway line from the Gare D’Austerlitz runs on a raised line along the road, under which a small shanty town of tents huddle underneath sheltering from the rain. A friendly security guard greeted me as I worked out which of the two roads Cléo and her soldier wander back on.

In 1961, Cléo could not have been in a better place to receive her medical news, of hope for healing. “This neighbourhood,” she says, “is full of hospitals. As if one were better cared for in the 13th and 14th arrondissements.” The statement has a stark irony today considering the other vagrant wanderers taking shelter just over the road, left to walk with no end in sight. 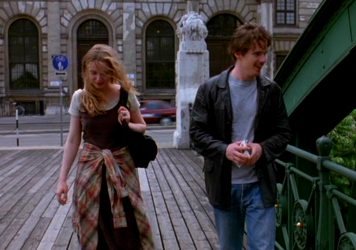