On Location: The graffiti wall from Sympathy for the Devil 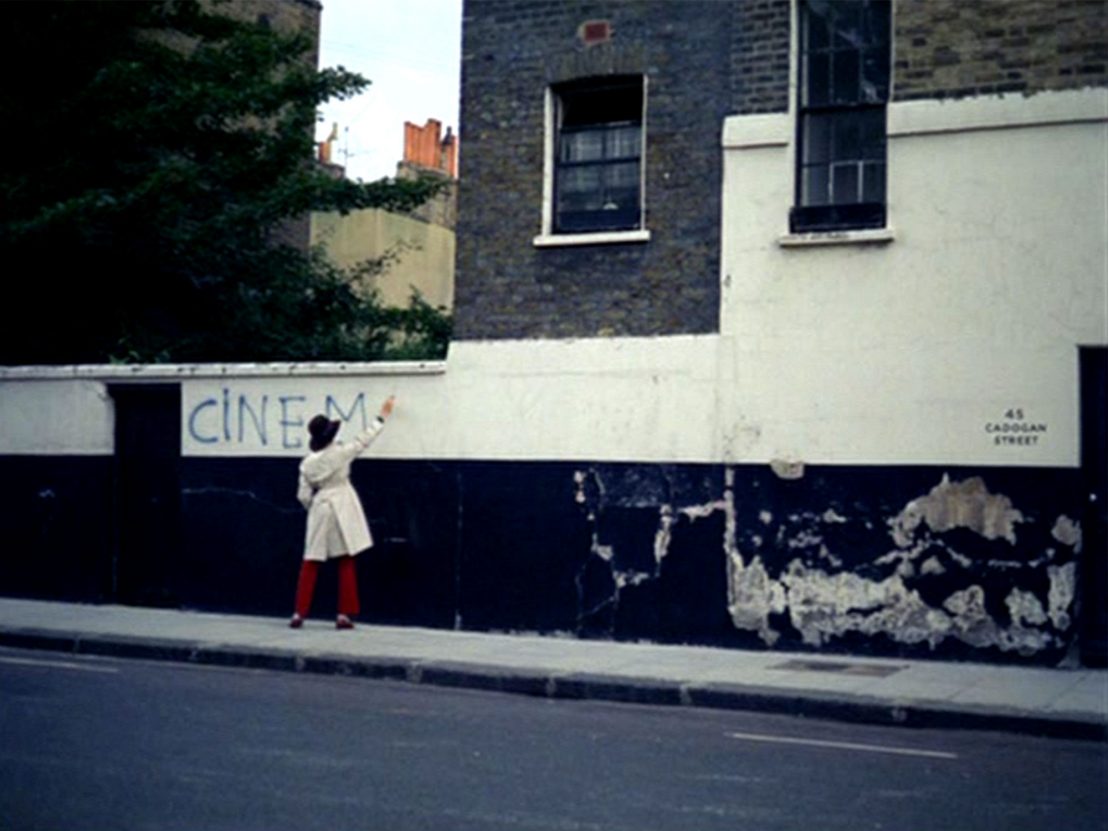 Consider the cinema of Jean-Luc Godard and it’s likely that the first place that comes to mind is Paris, in particular Paris at the turn of the 1960s when its style was never bettered. Yet by the end of the decade, Godard’s politics had taken a radical shift and had led him away from France (as well as his native Switzerland) to London to produce one of his stranger films, Sympathy for the Devil.

Marking a shift away from narrative cinema, the film mixes a wealth of cultural keynotes with a collage of political discourse, all the while maintaining the director’s eye for stark imagery. Essentially, the film is not merely a time-capsule of the atmosphere and energy from that excited end of the counter-culture but a document of the capital before its edges had been smoothed over.

Sympathy for the Devil takes its title from the song by the Rolling Stones. The song acts as a lynchpin for the film as the slow progress behind its writing and production evolves in Olympia Studios where the band are recording their album, ‘Beggars Banquet’.

Interspersed between long takes showing the band at work are fragments of scenes filmed all around London. They are often absurdist, political plays dealing with Vietnam, Black Panthers, fascism and everything in between; all rendered the more surreal by the ordinary London locations in which they are filmed. The film is a flicker book detailing the melting pot of cultural and political extremities imploding at the end of the ’60s in all of their vivid colours.

In spite of large chunks of the film unfolding in the recording studio, London plays a quintessential role. Godard had originally planned a film about abortion rights. With the abortion act of 1967, he was ironically left without a subject, though still wanted to make a London film, so long as he could collaborate with either the Beatles or the Rolling Stones. Along with his equally startling film produced with London Weekend Television, British Sounds, Godard had found his London projects.

He caught the atmosphere at exactly the right moment, capturing the period just before Brian Jones’ death, as well as several cultural moments, including an appearance of James Fox still in character for Donald Cammell and Nicolas Roeg’s Performance which Jagger was filming at the same time, along with Keith Richards’ partner Anita Pallenberg, also seen in the studio with Marianne Faithfull providing backing vocals.

But it is mostly Wiazemsky who explores London for proper in what appears to be gorilla filming of her painting typically Godard-esque graffiti on walls, cars and other things around the city. The first of these segments shows Wiazemsky painting the windows of a room at the Hilton by Hyde Park, beginning a series of interludes where no surface is safe from her Situationist scrawling. 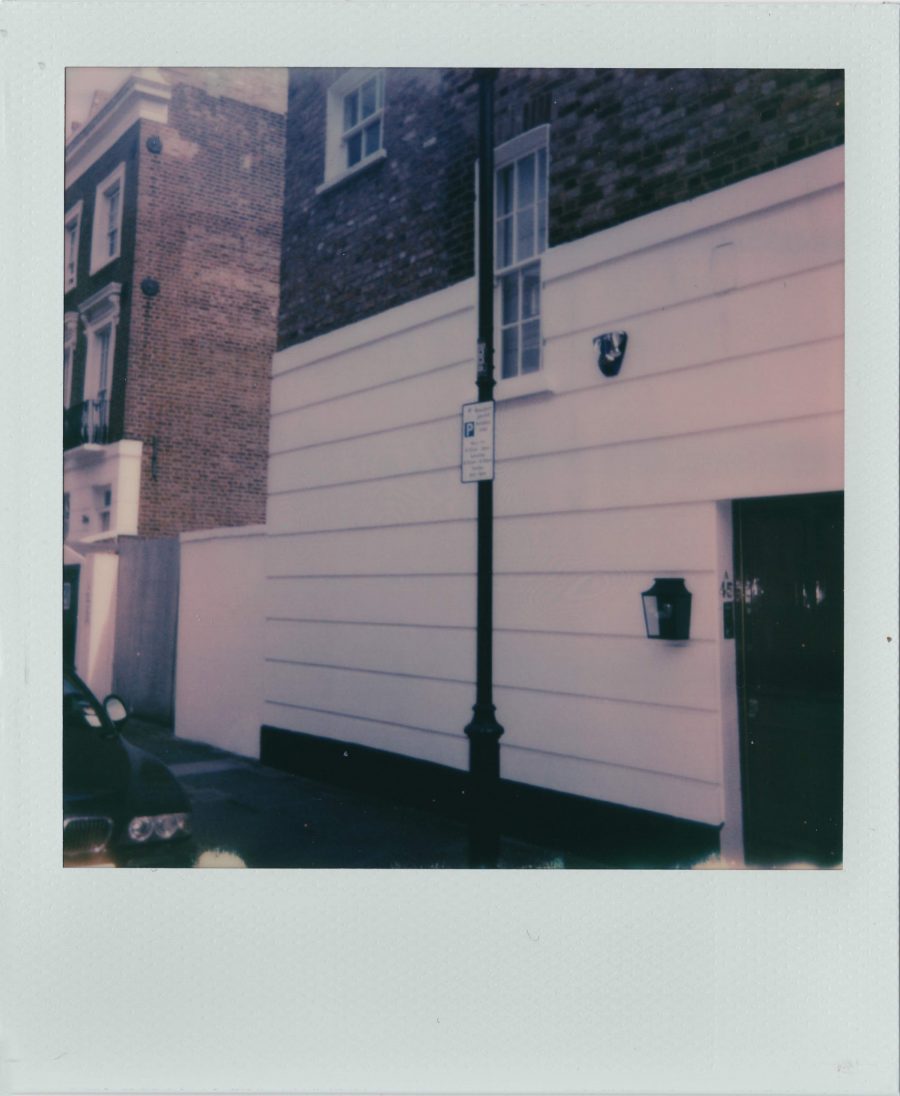 Though this occurs a number of times in a range of different locations, the one that sticks out for me is also one of the shortest. In the middle of the segment at Lombard Wharf, Godard cuts to a graffiti sequence on a white wall somewhere in the city. Eve Democracy writes “cinema” in black paint before Godard cuts abruptly, almost as if they were discovered and had to stop filming. It may have been an attempt at writing “cinemarxist” – something successfully achieved later on a piece of fence in Hackney – but it’s impossible to say. More intriguing is that it is the only segment and wall that has an address seen on it, 45 Cadogan Street visible on the wall near the door.

Though any number of these locations could have been visited from the film, this one was chosen because of the obvious likelihood in the area having gone upmarket. Perhaps the segment of Eve Democracy painting the car in Shalcomb Street in Chelsea or the pub on the King’s Road would have equally sufficed, but having an address made this one more interesting, essentially because the address had in fact changed.

The house stands today at the corner of a lavish residential area of Knightsbridge. The road in question is Hasley Street and the building is as it was except for some new brickwork restructuring the window; a probable conversion of the retail property into a luxury home or flat. As with the other Kensington locations, the feel of it being rough and ready has long since passed. The road is now littered with expensive cars and builders working on endless extensions and upgrades. Every wall has a white-washed quality undeniably fitting for a street that is within walking distance of Harrods. Godard and Wiazemsky would probably be arrested for trying the same stunt today.

The location ultimately raises questions about the intent of Godard’s film. As with the evolution of the song throughout the film, there’s a sense of momentum to the political arguments too, as if there may be some sort of revolution about to unfold just after the reel ends. Of course there were multiple moments but ultimately that decade’s optimism crashed out by the 1970s; injustice accelerated, Nixon beat McGovern and Knightsbridge became a realm uniquely of millionaires.

Whereas the song was finished and plays at the end of the film, revisiting the location allowed a brief lapse into another, more radical reality; one which failed to materialise with the same fortitude or haste.

Tags: Jean-Luc Godard Sympathy for the Devil The Rolling Stones